The Tata Nexon will come with a set of all-new 1.2-litre turbo petrol and 1.5-litre diesel engines. 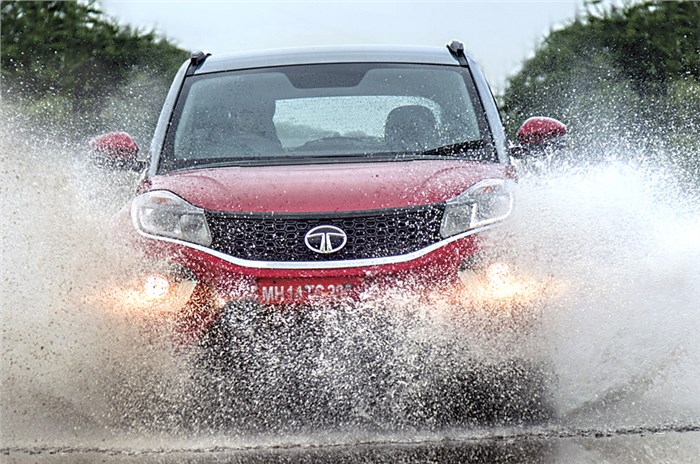 The Nexon will take on the Vitara Brezza and Ford EcoSport.

Tata Motors will launch its much awaited compact SUV, the Nexon, on September 21, 2017, in Mumbai. The Nexon has already begun reaching various dealerships in India and bookings are being accepted in full swing for an amount of Rs 11,000. Deliveries for the Tata Nexon compact SUV are likely to begin by end of this month. The Nexon is likely to come in base XE, XM, XT, XZ and XZ+ variants. We tell you more about Tata's upcoming compact SUV.

Engines and gearbox
Tata has ditched the Fiat-sourced, 1.3 Multijet diesel and has instead developed an all-new, 110hp,1.5-litre four-cylinder Revotorq diesel engine, which is essentially a scaled-up version of the 1.05-litre engine used in the Tiago. For the petrol Nexon, Tata makes use of a turbocharged version of the 110hp, 170Nm, 1.2-litre Revotron petrol engine, currently present in the Tiago. Both versions are expected to get a six-speed manual gearbox as standard, with the option of a six speed AMT for the diesel and the five speed AMT for the petrol which will join in later.

The Nexon will be the first in its class to offer multiple drive modes. The manufacturer says both engines have been designed at Tata’s in-house facility in Pune, along with inputs from suppliers like AVL, Bosch, Mahale and Honeywell. The petrol Revotron engine will be manufactured at Tata's Sanand facility, while the diesel Revotorq motor will be produced at the Ranjangaon plant.

Exteriors
'Radical' is the word that comes to mind when one takes a look at the Tata Nexon. It sports a muscular stance, a coupé-like roofline and some interesting styling elements. The front end of the car houses a stretched grille and nicely detailed projector headlamps. An attractive styling element is a horizontal strip that divides the headlamp housing, above which are the turn indicators. Tata's Impact design language does make the Nexon a looker.

The Nexon uses its body paint to contrast with the roof. There’s also a unique ceramic finish for the highlights around the fog lamps, the window line and the LED tail-lights.

At the rear, the Nexon gets diamond-shaped tail lights connected by a white strip, a high rear bumper and a small, rear windscreen. Overall, it’s quite a bold and attractive design. It carries a lot of cuts and creases, unlike its chief competitor, the Maruti Vitara Brezza, which follows a rather boxy design.

Interiors
A 6.5-inch HD touchscreen system sits atop the dash, while the rest of the dash follows a simple, straightforward layout with a lot of bits borrowed from other Tata cars. The Nexon is expected to be well equipped with features like climate control, rear air-con vents and voice commands for the eight-speaker Harman infotainment system on top-spec models. Android Auto (at launch) and Apple CarPlay (at a later date) will come as standard. The cabin also features an easily accessible storage space with a sliding tambour door mechanism near the transmission called the Grand Central Console by Tata, inspired by upmarket cars. A standout feature, however, is the drive mode controller, which interestingly, isn’t a small button, but a chunky knob to choose between the three drive modes – Eco, City and Sport.

In terms of safety equipment, all variants of the Nexon will be offered with dual-front airbags and ABS with corner stability control. In addition, Isofix child seat mounts will be available for the rear seats while a brake assist feature will help when stopping in an emergency.

Getting in and out of the Nexon should be an easy affair, thanks to the high stance and high-set seats. The seats themselves are well-cushioned and comfortable. However, the shape of the rear seat makes it difficult to accommodate a fifth passenger. But despite the coupé-like roofline, headroom is actually decent, and legroom too is good.

Pricing and competitors
Expect the Nexon to be priced aggressively, somewhere around Rs 7-10 lakh. When launched, it is likely to put up a tough fight in the segment. Its chief competitors include the Maruti Vitara Brezza, which has proved to be a runaway success, and the Ford EcoSport, which has held its ground well.

Also check out our Tata Nexon gallery with exclusive images.