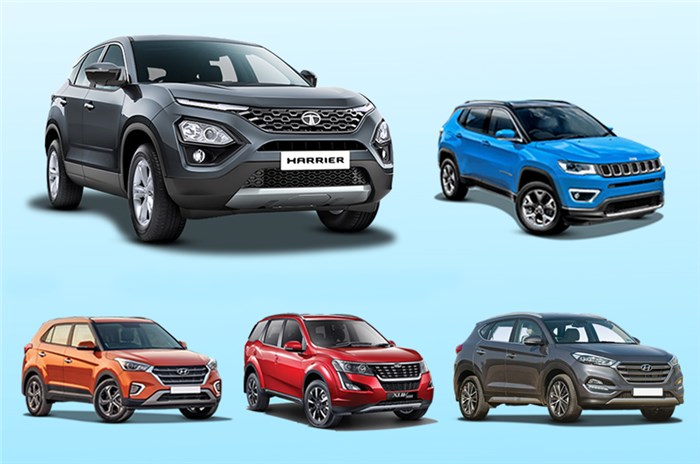 We pit the new Tata Harrier's features list against rivals like the Hyundai Creta, the Mahindra XUV500, Jeep's Compass and the Hyundai Tucson.

Tata’s upcoming Harrier SUV is sure to shake-up the Indian market when it arrives in mid-January 2019. Based on its expected on-road price tag of Rs 16-21 lakh, the Indian carmaker hopes that the Harrier will face-off against rivals that span at least two segments, starting with the Hyundai Creta and Mahindra XUV500 at the lower end and going up to the Jeep Compass and the Hyundai Tucson at the other end of the spectrum. While the Harrier is larger on the outside and expected to be more spacious on the inside as compared to its competition, how does it compare on its safety kit and features list? We’ve brought together the top-spec variants of each SUV to find out.

First, a look at the prices of each of the range-topping diesel-manual variants:

Tata has equipped the Harrier with safety features that, for the most part, are equal to those offered on rivals. The top-spec Harrier does have an advantage over the respective Creta and Compass variants by coming with Isofix child-seat mounts and hill-descent control. The Harrier, Compass and XUV500 also come with traction control, though the Tata is the only model here to get brake-assist as standard. However, it is the XUV500, Compass and Tucson that come with a superior braking setup (on paper) sporting disc brakes on all four wheels. An interesting point to note is that the diesel-manual Tucson is only available in the base trim but still gets Isofix child seats mounts and a reverse camera as standard.

When it comes to off-road capability, the Compass takes its cue from other Jeep models and gets four-wheel drive as an option, along with a terrain selection mode that enhances its go-anywhere ability. The XUV500 does get an optional AWD set-up, while the Creta and Harrier are both only available with front-wheel drive. While the top-spec automatic gearbox-equipped Tucson does get an optional all-wheel-drive system, the diesel-manual variant does not get this option. The Harrier does come with a selectable terrain response system similar to the one found on the Compass – which means that it may be more capable off the beaten path than the front-wheel-drive version of the Tucson and the Creta.

The Harrier has an edge on its competition in this department, boasting the largest touchscreen infotainment display and the highest number of speakers (and an amplifier). However, both the Hyundais and the Mahindra get navigation as standard, which the Compass and Harrier miss out on. While the Harrier and Tucson get an Aux-in (a feature not available on rivals) the lack or addition of this feature doesn’t make a lot of difference in this comparison and at this price point.

The Creta is the only model here that does not get a telescopic adjust for the steering and also misses out on the 60:4-split folding rear seats. However, it must be noted that the Creta’s SX AT trim does get the latter feature. Unlike its competition, the Harrier does not get a power-adjustable driver’s seat. While the base Tucson may miss out on the 10-way power adjustable driver’s seat that higher trims of the SUV get, it gets reclining rear seats, as does the XUV500.

While the Creta misses out on features such as automatic headlamps and wipers and a cooled storage unit, it does undercut its rivals on price. The Compass’ features list is let down by the lack of cruise control. However, a feature that consumers expect on SUVs in this price bracket is a sunroof, which is missing from the Harrier. The base Tucson does get leather upholstery but misses out on essential creature comforts such as cruise control, a push-button start, rear AC vents, climate control and a sunroof. It is to be noted that the higher-spec diesel-automatic trims of the Tucson do get these features.

Overall, the Harrier is a well-equipped SUV, if not segment-leading; but one must keep in mind that the Harrier is larger than all its rivals here, both inside and outside, which may help compensate for the lack of certain features.