The souped-up hatch gets muscular styling and dedicated colour scheme to up its sporty appeal. 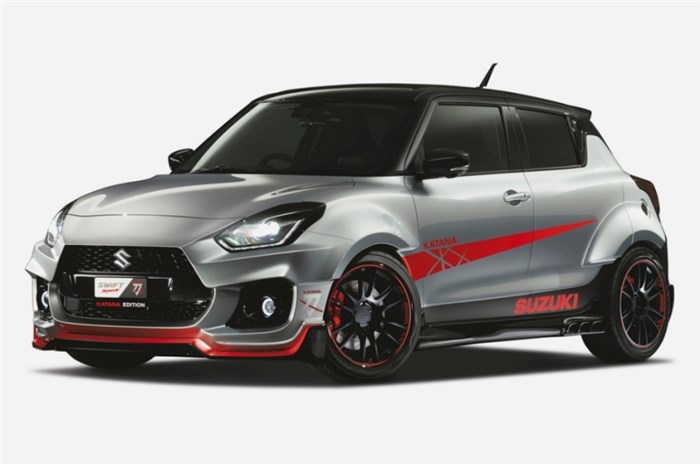 Japanese automaker Suzuki has announced its line-up for the 2020 Tokyo Auto Salon slated to be held from January 10-12. Among a wide range of products, the company will be showcasing a highly customised version of the Swift Sport hot hatch at this 38th iteration of the motor show. For a long time, the Tokyo Auto Salon has been used as a platform for exhibitors to demonstrate the latest technology and display highly tuned and kitted-out vehicles.

Dubbed the Katana Edition, the Suzuki pays homage to its iconic Katana motorbike. The hot-hatch is based on the already souped-up Swift Sport available in international markets. In terms of design, the show vehicle takes it a step further and ups the model’s sporty appeal by employing edgier styling cues, including flared wheel arches at the front and rear. It wears a grey paint shade with a contrast-coloured roof, A-B-C pillars and wing mirror elements, along with ‘Katana’ themed graphics and decals on the sides.

The latest iteration of the Swift Sport was unveiled for the global markets last year. It is powered by a 1.4-litre, four-cylinder, turbocharged “Boosterjet” petrol engine that provides enough oomph for accelerating the 970kg hatch from standstill to a 100kph in just 8sec. Output is rated at a commendable 140hp and 230Nm of torque, with either a 6-speed manual or a 6-speed automatic handling transmission duties. In comparison, the India-spec Swift gets an 83hp, 1.2-litre, naturally-aspirated petrol engine and a 75hp, 1.3-litre diesel mill, with the latter set to bow out prior to the April 2020 deadline for BS6 emission norms. Buyers have the option of a 5-speed gearbox on both the engine offerings, available in either manual or AMT-automatic form.

There has been no official announcement about the Swift Sport making it to India anytime soon. Consequentially, the only sporty hatch that Maruti Suzuki can boast of for the time being is the Baleno RS, equipped with a 102hp, 1.0-litre turbo-petrol motor from the same Boosterjet family of engines as the 1.4-litre unit in the Swift Sport.