We take a look at how the Kushaq SUV compares to its mid-size SUV rivals on paper. 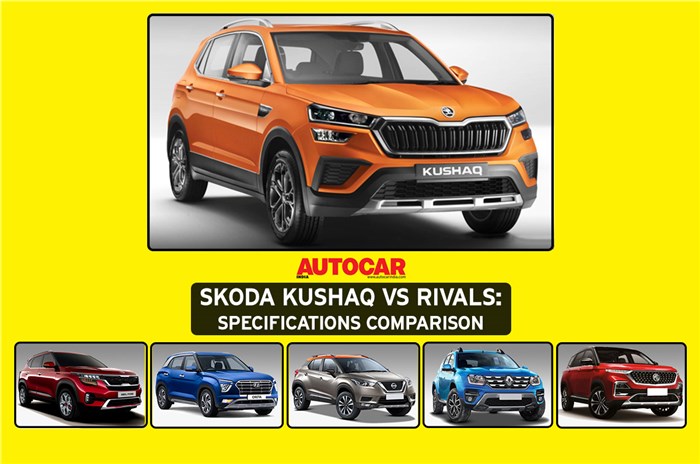 The Skoda Kushaq, after much-anticipation has finally been launched in India, with prices starting at Rs 10.49 lakh and going up to Rs 17.59 lakh (ex-showroom, India). The Kushaq is the first model to arrive from the VW Group’s India 2.0 project and it is based on the group’s localised MQB A0 platform.

Skoda has positioned the Kushaq in the mid-size SUV segment competing with the likes of the Kia Seltos, Hyundai Creta, Nissan Kicks, Renault Duster and MG Hector. Its Volkswagen sibling the Taigun is also set to join the segment later this year.

We have compiled the technical specifications of the new Skoda Kushaq and its rivals, to see how they stack up against each other, on paper.

From the table above, it is quite clear that the Skoda Kushaq is the smallest offering in the segment, at least in terms of its length, width, height and even boot space. Though it is actually the Kia Seltos and Hyundai Creta that have the smallest wheelbase in this company.

On the flip side, the MG Hector is the largest SUV in this comparison, and by a significant margin. The Hector is a considerable 430mm longer, 75mm wider, 148mm taller and has a wheelbase that is 99mm longer than the Kushaq.

Among all the SUVs with naturally aspirated (NA) petrol engines, it is the Korean units in the Seltos and Creta that are the most powerful, producing 115hp. The 1.5-litre engine in the Kicks and Renault Duster don’t quite match up to the Korean rivals as they are 9hp and 2Nm down on power and torque, respectively.

The most powerful turbo-petrol engine is the unit in the Nissan Kicks and Renault Duster. The 1.3-litre, four-cylinder unit churns out 156hp, which is just marginally more than the 150hp output of the Kushaq’s 1.5-litre TSI. Though on the other hand the 1.0-litre TSI engine in the Kushaq also has the lowest output of the turbo-petrols in this comparison. However, this is down to the fact that it has the smallest displacement of the lot.

In terms of torque, the Hector and the Kushaq 1.5-litre TSI produce the highest figures, which at 250Nm is only 5Nm more than the Kicks and Duster’s figures.

You can read our review of the Skoda Kushaq to get an idea of what the new mid-size SUV will be like to drive on our roads.

It is worth pointing out that the Kia Seltos, Hyundai Creta and MG Hector, are all available with the option of a diesel powertrain.

In terms of pricing, it is quite clear that the Skoda Kushaq has been positioned on the higher end of the segment, while still being competitive with the competition. We can see from the table above, that the prices of the Kushaq 1.0 TSI MT version are marginally higher than the 1.5-litre naturally aspirated versions of both the Kia Seltos and Hyundai Creta. Though, the 1.0 TSI automatic price range is cheaper at the base and top end when compared to the Seltos and Creta.

The Kushaq’s 1.5 TSI on the other hand is more competitive with the Korean’s 1.4-litre turbo-petrol versions, with the Skoda having a higher starting price than both the Seltos and Creta, but having a lower price for its top-spec trim than the equivalent Creta.

In this comparison, however, it is the Nissan Kicks that is the most affordable model, closely followed by the Renault Duster. On the other hand, the MG Hector is the costliest of the bunch for both its manual and automatic iterations. We have not taken into account the prices of the diesel versions of the Kia Seltos, Hyundai Creta and MG Hector in this comparison.