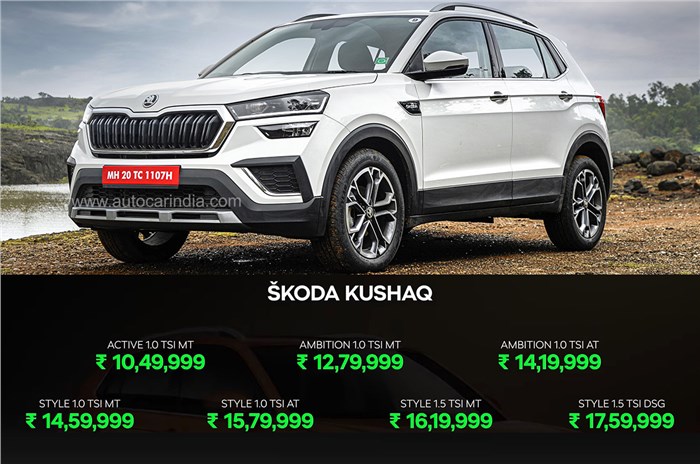 The much-awaited Skoda Kushaq has been launched in India, with prices starting at Rs 10.49 lakh for the base 1.0 TSI Active trim and going up to Rs 17.59 lakh for the top-spec 1.5 TSI AT Style trim. Skoda first showcased the SUV in concept form as the Vision IN, back at the 2020 Auto Expo, with the production-spec model being revealed in March 2021. This is also Skoda’s first SUV based on the localised MQB A0 IN platform.

Skoda has also begun accepting bookings for the midsize SUV via its dealerships and website, with the booking amount set at Rs 35,000.

On the design front, the Kushaq carries over many elements from the Vision IN concept, and its overall style is in line with Skoda’s larger SUVs. Up front, it has Skoda’s trademark grille flanked by sleek headlights on either side and a secondary light cluster positioned just below.

The Kushaq features some sharp lines and prominent creases along the body. At the rear, it has large wrap-around LED tail-lights, a faux diffuser element on the bumper, and a roof-mounted spoiler. The top-spec model also comes with a set of 17-inch alloy wheels.

The interior of the Kushaq has a clean and minimal design, with a layered dash that has a free-standing touchscreen sitting in the middle. Skoda has also equipped the SUV with a two-spoke steering wheel (like the one in the new Octavia).

The Czech carmaker has launched the Kushaq in three trim levels – Active, Ambition and Style. However, Skoda is expected to introduce a new range-topping Monte Carlo trim down the line. Key features for the Kushaq Monte Carlo will include a digital instrument panel, sporty seats, contrast stitching and an overall sporty look and feel to the cabin. The Monte Carlo edition could also be limited to the 1.5 TSI version.

Powering the Kushaq is a pair of turbo-petrol engines. The first is a 1.0-litre, three-cylinder TSI unit that produces 115hp and 178Nm, and the other is a larger 1.5-litre, four-cylinder TSI unit that develops a 150hp and 250Nm. Both engines get a 6-speed manual gearbox as standard. Additionally, they also get the option of automatic gearboxes – a 6-speed torque converter for the 1.0 TSI and a 7-speed DSG for the 1.5 TSI. Additionally, the 1.5 TSI also gets cylinder deactivation technology for better fuel efficiency.

The Kushaq has entered the hotly contested midsize SUV segment, where it takes on the likes of the Hyundai Creta, Kia Seltos, Nissan Kicks, MG Hector and Tata Harrier. This list will grow with the introduction of its sister car, the VW Taigun, which is expected to arrive in the coming months. 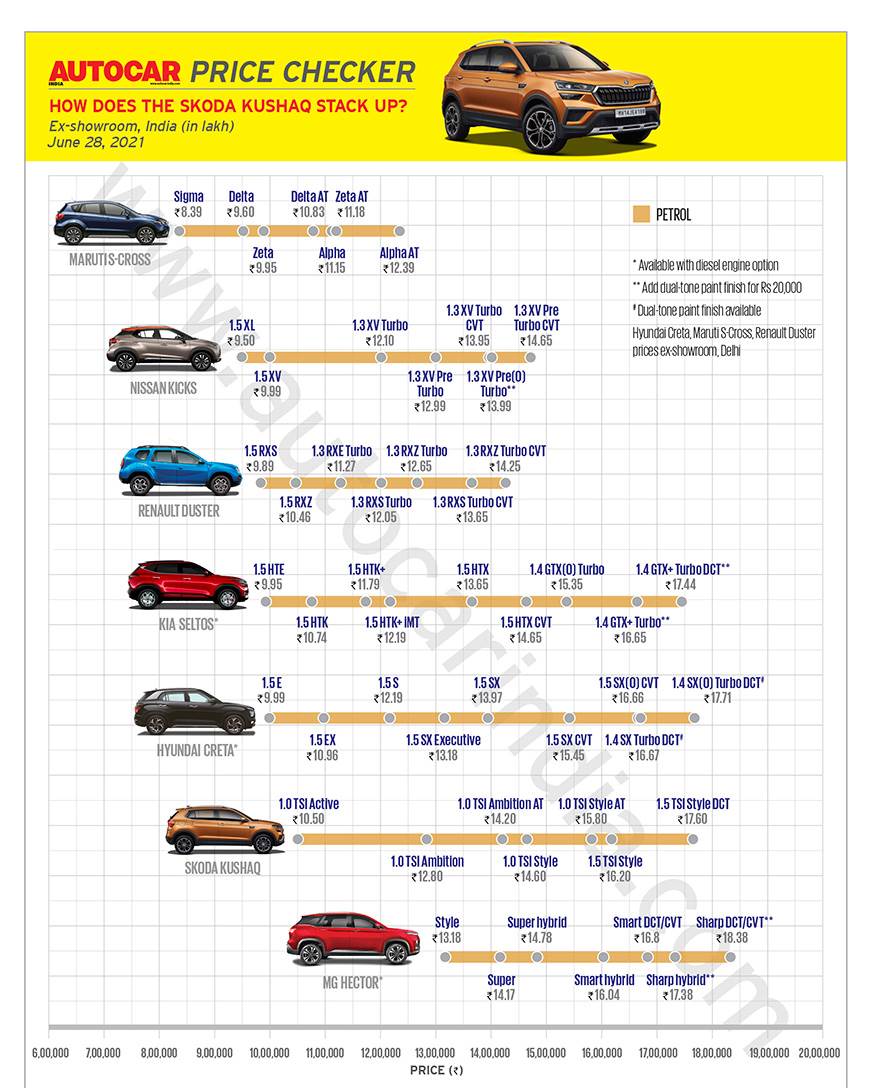