Over a year after being discontinued, the Skoda Kodiaq is set to return to the Indian market as a petrol-only model. 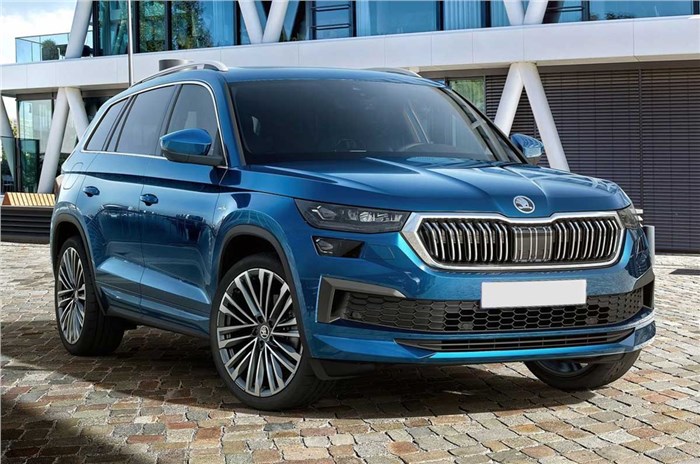 The Skoda Kodiaq finally has a tentative launch time-frame, as Zac Hollis – director, sales, service & marketing, Skoda Auto India – took to Twitter yet again to confirm that the SUV will be launched in January. The Kodiaq rejoins Skoda’s India range after it was discontinued in our market last April, due to the move to BS6 norms. The Skoda Kodiaq received a mid-life refresh earlier this year, that brought with it more tech and updated styling.

With the recent facelift, Skoda has subtly updated the Kodiaq’s styling with a new, more upright grille, an elevated bonnet, re-profiled front and rear bumpers and an updated LED Matrix headlights with a new design. From the side and rear, the SUV’s sleek and well-proportioned design has remained more or less unchanged compared to the older model.

On the inside too, Skoda has made some changes to the Kodiaq with the two-spoke steering, similar to the ones on the Octavia and Taigun, being the most noticeable. Besides this, the India-spec model is expected to come with all the features that the older model had, such as Skoda’s 10.25-inch Virtual Cockpit digital instrument cluster, an 8-inch touchscreen infotainment system, ambient lighting and automatic climate control. We will have to wait and see if the larger 9.2-inch infotainment touchscreen available abroad will be offered here.

Under the hood is where the biggest change for the Kodiaq lies, as the SUV makes the switch from diesel to petrol power. There will be a sole 190hp, 2.0-litre, four-cylinder TSI turbo-petrol engine on offer (compared to the old 150hp, 2.0-litre diesel). The engine will be paired to a 7-speed automatic gearbox with all-wheel drive being standard fit.

As before, the refreshed Kodiaq will rival other monocoque, three-row premium SUVs in our market like the Tiguan Allspace, which is also due to get a facelift, as well as the upcoming Jeep Meridian.