Measuring under four metres in length, the seven-seat Renault Triber is set to go on sale in the coming months. 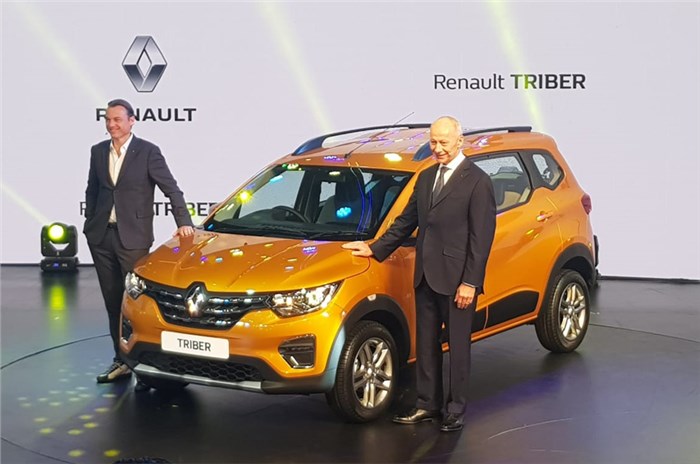 Revealing what is its first all-new product for India in nearly two years, Renault has taken the wraps off of its compact seven-seater, the Triber. Making its global debut in New Delhi, the Renault Triber measures under four metres in length and, barring the Datsun Go+ MPV, is the only sub-four-metre offering in India to get three rows of seats.

Based on a modified version of the Kwid’s CMF-A platform, the Renault Triber is compact and does bear resemblance to the Kwid, but has new headlights, a new grille, a sculpted clamshell bonnet, a squared-off rear section and an upright stance, which is further accentuated by the roof rails. With the Triber, Renault aims to provide a function-over-form design that makes it possible to offer lots of space in the smallest footprint possible. The top-spec variant will sport 15-inch alloy wheels shod in 185/65 tyres.

With the Triber, Renault is looking to play the space card, and for good reason. The French carmaker has managed to liberate a remarkable amount of interior space within a sub-4-metre footprint, and while room in the third row is decent at best, the second row has a good amount of head and leg room. Quality levels are up too, and for those looking for a spacious car that's also compact, the Triber will be a car of great interest.

The Renault Triber's interior gets a dual-tone colour scheme, a 3.5-inch LCD screen in the instrument cluster and an 8.0-inch touchscreen infotainment system, which is larger than the 7.0-inch unit on the Kwid, Lodgy, Duster and Captur. The infotainment system features Apple CarPlay and Android Auto, along with few intelligent functions such as driving-style coaching and driver economy rating. The second row is adjustable horizontally and comes with a reclining and split folding function. There's a dedicated AC vent for the third row of seats, armrests and charging sockets. The third row can be removed altogether to liberate up to 625 litres of boot space.

Powering the Renault Triber will be an upgraded version of the Kwid’s 1.0-litre (BR10), three-cylinder petrol engine making 72hp and 96Nm of torque. This engine is the same 1.0 SCe petrol motor used in international models like the Renault Clio and Dacia Sandero. The transmission options for the Triber at launch will be a 5-speed manual gearbox and a 5-speed automated manual transmission (AMT). Renault will also add a turbocharged 1.0-litre petrol engine to the Triber line-up later.

However, what remains to be seen is how well the Triber's 1.0-litre petrol engine performs. At 947kg, the Triber is well over 200kg heavier than the Kwid, and its power-to-weight ratio of 76hp-per-tonne is notably lower than the 97hp-per-tonne ratio of the Kwid. Renault has tweaked the 1.0-litre Energy engine's power delivery and gear ratios for better drivability, but with a full load, the Triber could be left wanting for more power, and that means the turbocharged 1.0-litre engine option will likely be introduced sooner rather than later.

The Renault Triber's launch in India is set to take place in the coming months, and while there are no direct rivals, the Triber will aim to fight it out with the premium hatchbacks and compact SUVs currently on sale. The French brand claims that the total cost of ownership is 20 percent less than B segment hatchbacks. Expect Renault Triber prices to start at the Rs 5.3 lakh mark.

What do you think of the Renault Triber? Let us know in the comments.