With seating for seven, up to 625 litres of luggage space and the option of an AMT automatic, the new Renault Triber has some interesting ingredients. We take a closer look. 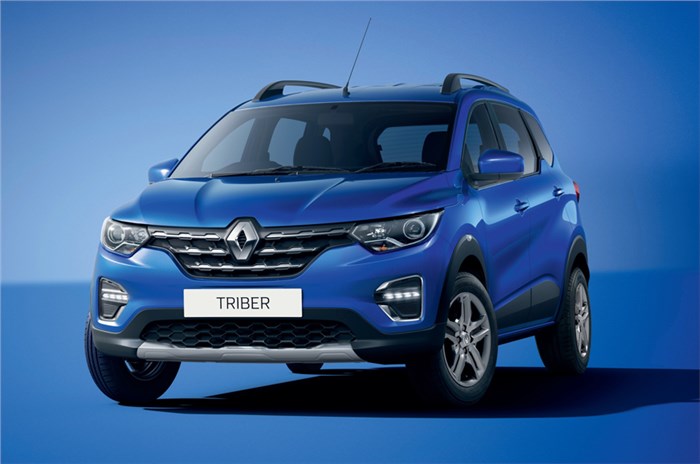 Renault has had a quiet few years in India but things change with this, the new Triber. Unveiled amid much fanfare in New Delhi, the Triber is the French carmaker’s all-new compact seven-seater. Measuring under four metres in length, the Triber is a few sizes smaller than Renault’s other seven-seater, the Lodgy MPV, and frankly comes with a whole different proposition. The Triber is targeted at younger buyers and those with a need for flexibility, versatility and practicality from their cars. We’ve had a close look at the Triber, and spent some time sitting in it. Here’s our first impression.

Designed with close cooperation between Renault’s design centres in India and France, the Triber conforms to the carmaker’s global styling language and, in effect, has a very international look to it. The Renault lozenge takes pride of place up front and there’s plenty of chrome at the grille too, something that lends the Triber an upmarket look. Shapely headlights (with projector elements) fuse into the grille and sit under a clamshell bonnet. LED DRLs are also part of the package. There is a resemblance to the Kwid and other high-bonneted Renaults at the front but you won’t mistake one for the other. It may be shorter than four metres (length is 3,990mm) but the Triber is still a fairly substantial car. Its 1,739mm width and 1,643mm height make the Triber about as wide and tall as a Maruti Suzuki Vitara Brezza, for reference. However, the Triber’s trump card is its 2,636mm wheelbase, which is amongst the largest of all sub-four-metre models. Interestingly enough, the choice of engine had a role to play in the Triber’s short bonnet and large passenger cell proportions. Early into the project, Renault decide to scrap a diesel engine option, and the space saved by opting for a small petrol engine was made available to the passengers. 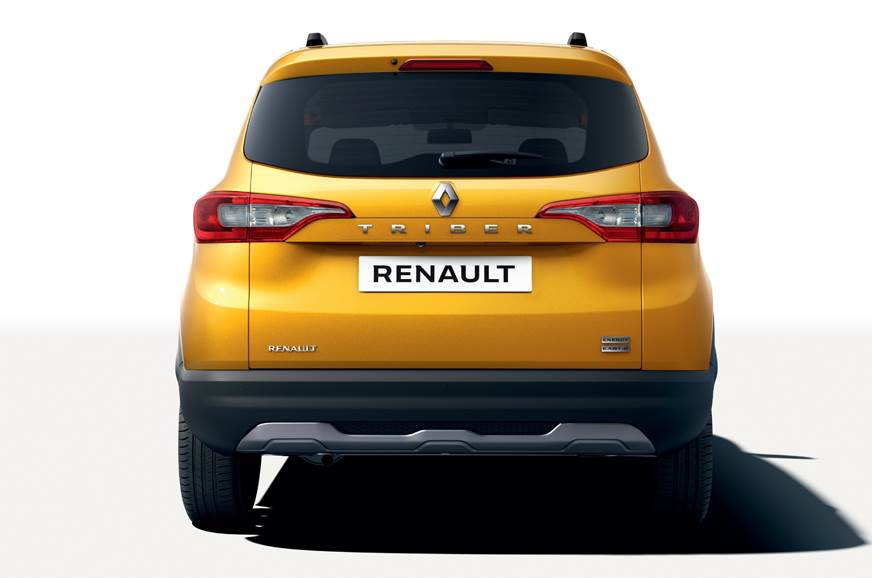 Renault hasn’t categorised the Triber’s body style, though a crossover describes the shape best. You’ll find many SUV-inspired elements such as scuff plates at the front and rear, cladding around the wheel arches, chunky runners at the sides, and roof rails (with a load capacity of 50kg) also add some attitude to the design while masking the stepped roof. The top-spec Triber also sits confidently on its 15-inch wheels that come wrapped by 185/65 tyres from Ceat. Lower-spec versions will get 14-inch rims with 165/80 R14 rubber. What undoubtedly also helps the Triber’s stance is its 182mm ground clearance.

Adding further distinction to the Triber is the glasshouse that has a distinct kink at the C-pillar to help break up the van-like window line. Renault designers have cleverly surfaced the body to add ‘mass’ to the design and the manner the flanks flow into the taut rear is neatly executed. An upright tail, large wrap-around tail-lamps, a tail gate that extends low down and a spoiler atop the rear windscreen are some of the talking points at the rear. 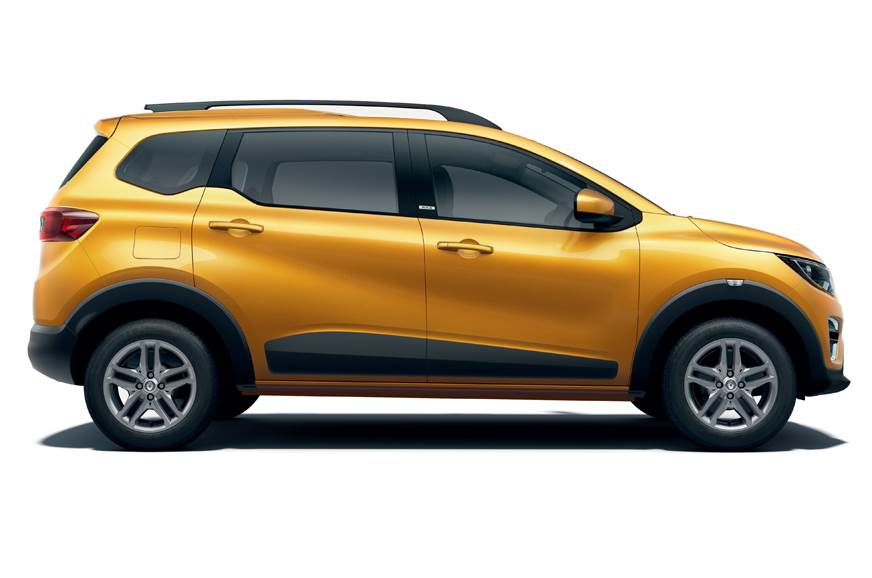 The Triber is built on Renault’s new CMF-A+ platform and its suspension comprises front MacPherson struts and a rear torsion bar, par for the course for this class of car.

Use the premium pull-type door handles to open the doors and you’ll like what you’ll see on the inside of the Triber. Cabin quality, is up there with pricier compact SUVs. There are no soft-touch materials in here but there’s a nice mix of matt textures and colours to make the cabin look somewhat upmarket. Chrome detailing and a metallic finish that runs across the dash only ups the ambience further. Renault has also hidden the joints between the various surfaces on the dash by tucking them in and placing them out of view. 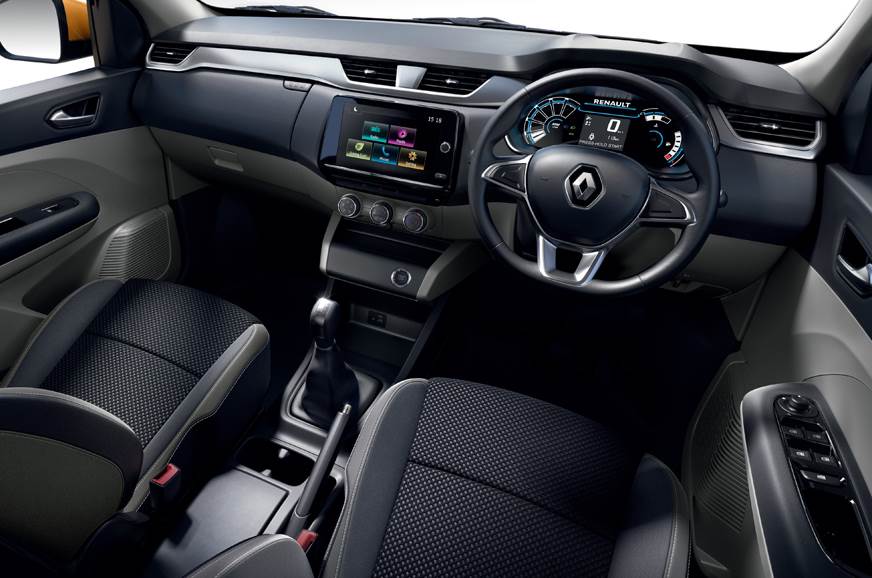 The Triber’s dashboard is neatly laid out and is in tune with modern requirements, with a touchscreen taking pride of place on the centre console. Interestingly, at 8.0-inch, this touchscreen is larger than the 7.0-inch unit Renault currently offers on the Duster, Captur, Lodgy and Kwid. The new unit also goes one up on the existing system by offering Android Auto and Apple CarPlay, and can also play video via USB. Also unique to the Triber is its digital instrument cluster that features a 3.5-inch LCD screen that’s flanked by ‘virtual gauges’ for the tachometer, fuel level and engine temperature. 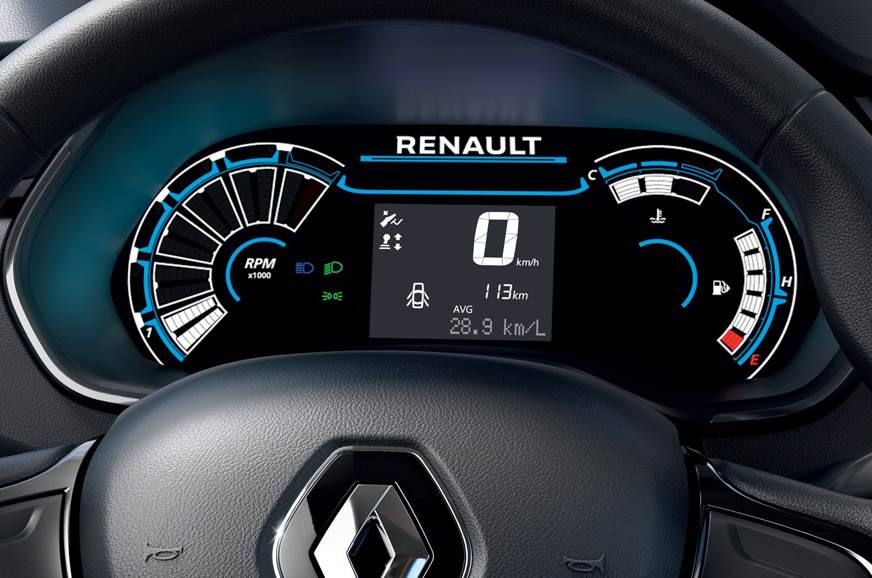 The Triber’s seats come finished in multiple fabrics, they are reasonably bolstered, and cushioning is fairly good too. The real talking point is the Triber’s middle row and specifically the space on offer. The middle seats can be split 60:40, the backrests can be reclined and the seats can also be slid a long way fore and aft to balance kneeroom for the third row. With the seats pushed all the way back, there’s a fair amount of legroom in the middle row. Pushing the middle seats fully forward does compromise the space and comfort, and the cabin isn’t as wide as that of other seven-seaters either, but travelling with all seven seats occupied still isn’t unthinkable. The last bit is quite something when you consider that this is a car no longer than your average premium hatchback. 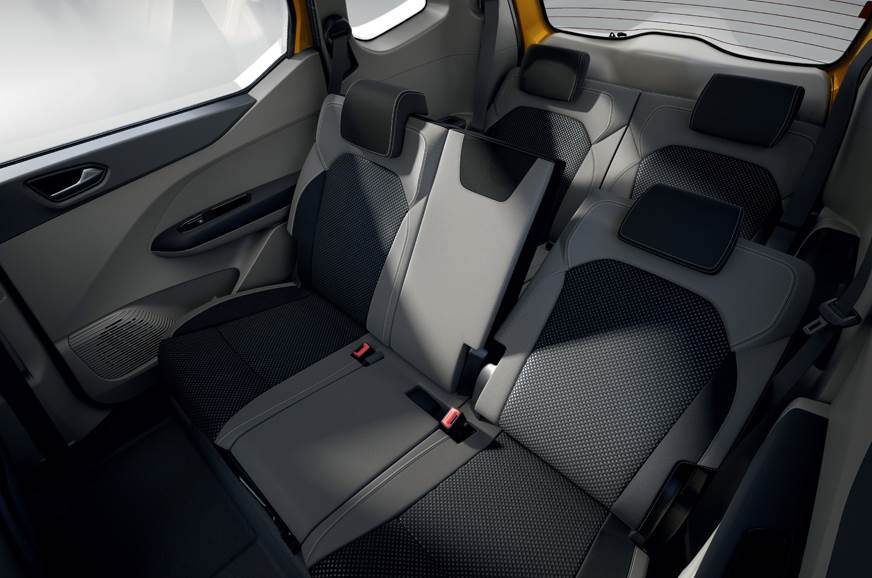 What makes this possible are large rear doors that open wide and the option to fold and tumble the middle-row seats means access to the third row isn’t as cumbersome as you’d expect. Again, legroom in the third row is only sufficient and you are seated a bit low but what comes as a surprise is that the third row is quite useable, especially for short stints. There’s even reasonable headroom in the back and the armrests at the sides also aid comfort. Adjustable headrests are a welcome inclusion too but the rear windshield is a bit too close for comfort. 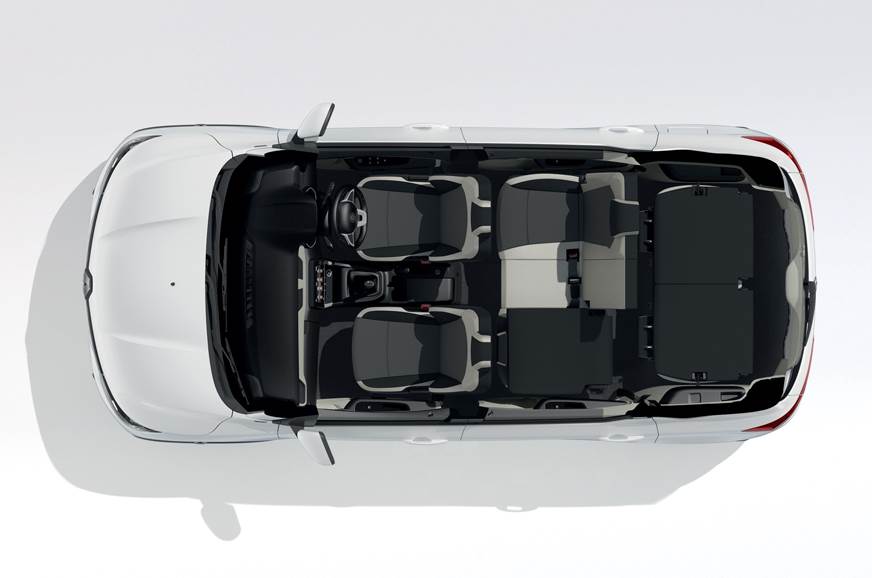 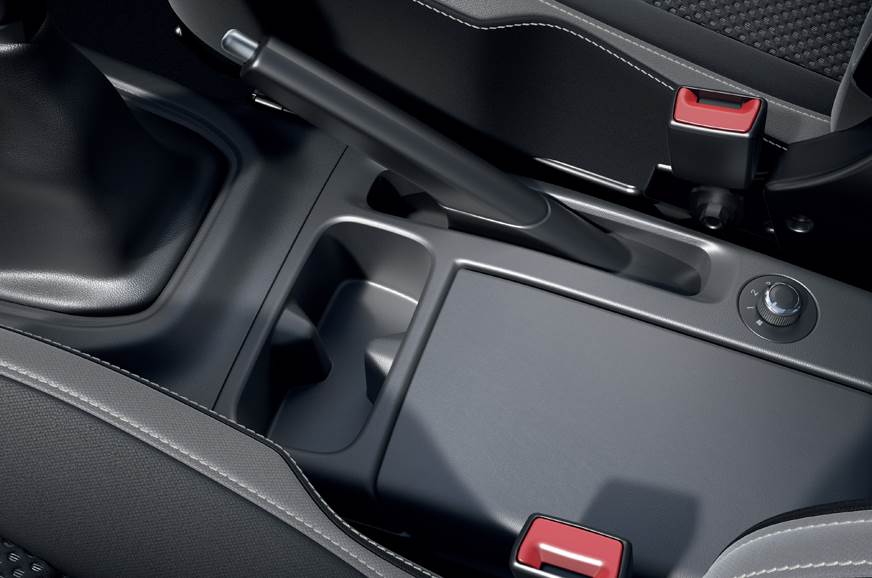 The Renault Triber also scores well in other areas. There are two glove boxes, of which the lower one is cooled. Additionally, there is also a cooled compartment between the front seats so there are plenty of ways to keep beverages chilled inside the Triber. And, with two cooling coils, the Triber’s air-con system should also help passengers in all three rows keep their cool. The vents for the middle row are positioned on the B-pillars, while the third row vents are mounted on the roof.

What features will it come with?

Renault has not given the variant-wise breakup as yet, but even base trim Tribers will come with three-point seatbelts on all rows, ABS, reverse parking sensors and at least two airbags. Additionally, range-topping models will feature front-side airbags and will also come with a reverse camera. 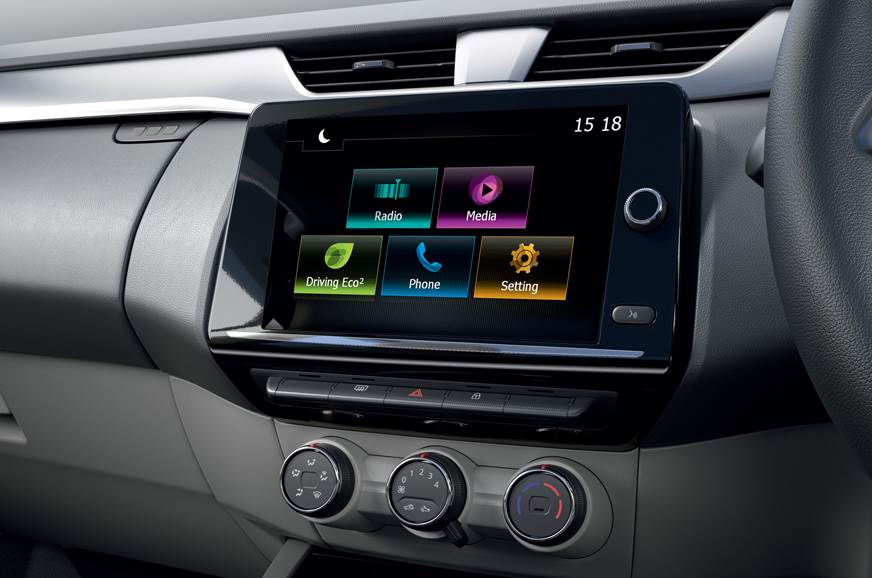 Top-of-the-line Tribers will also get the aforementioned projector headlights, touchscreen infotainment system, digital instruments, air con vents in all three rows, and cooled centre box. Also part of the package will be keyless entry, push-button start, power windows and rear wash-wipe. However, auto climate control and steering-mounted buttons will be given a miss. 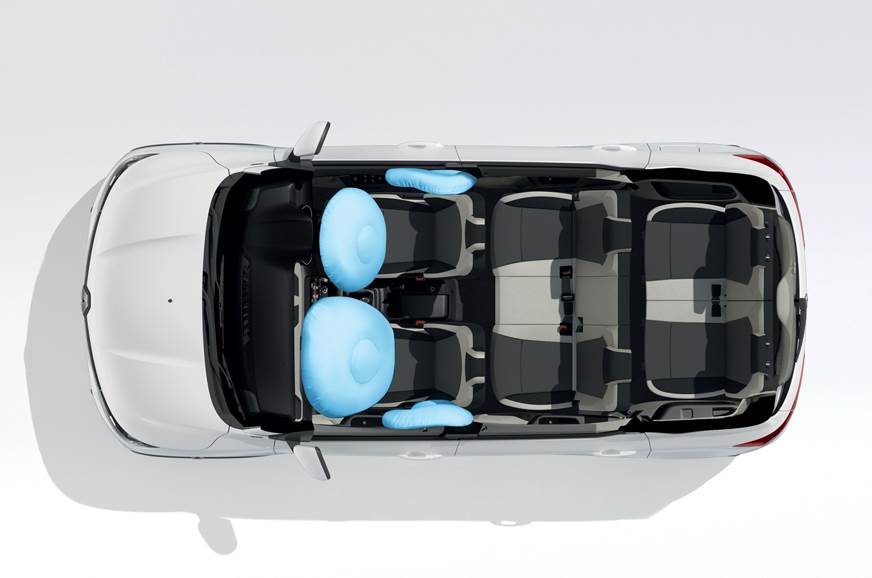 What engines will it come with?

Renault has announced that the Triber will come powered by its 1.0-litre Energy engine that also powers international models like the Clio and Sandero. The engine is a 999cc, three-cylinder unit with variable valve timing on both intake and exhaust sides. It makes 72hp at 6,250rpm and 96Nm of torque at 3,500rpm. While the figures are fairly impressive figures for a naturally-aspirated 1.0 unit, the power and particularly torque outputs are low for a car that weighs just shy of one tonne. Renault says it has optimised low-speed torque in keeping with the Triber’s usage, though we’ll have to see how the model performs with a full load. What’s good is that a turbocharged version of the same engine is also on the cards and could give the Triber the necessary oomph. 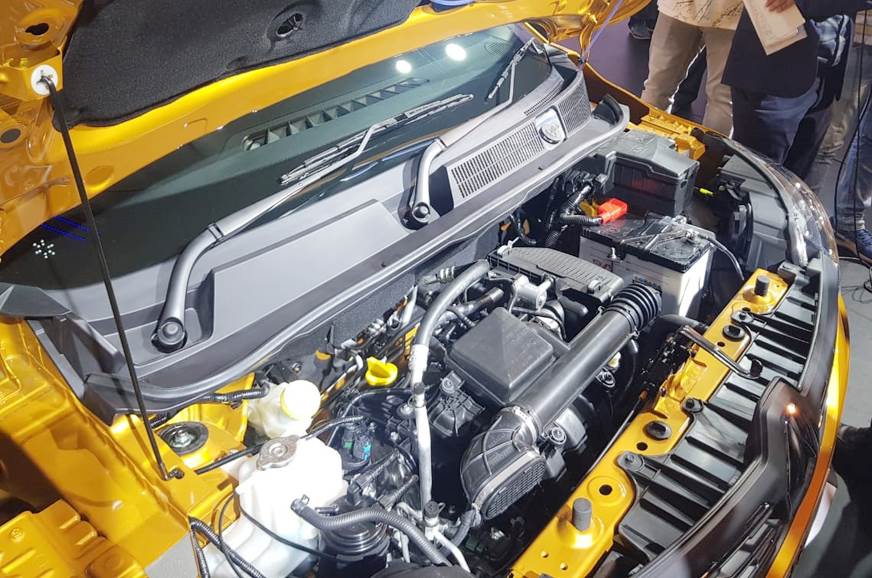 As for transmissions, a 5-speed manual gearbox will be standard fit on the Triber and there will also be the option of Renault’s Easy-R AMT automatic unit based around the same 5-speed unit. The powertrain promises to be frugal too, with an ARAI-certified fuel economy of 20.5kpl.

Should you wait for one?

Renault will launch the Triber in August this year and we expect its prices to start at Rs 5.3 lakh (estimated, ex-showroom). At this price, the Triber will slot in just above the Datsun Go+, which is presently the most affordable 'seven seater' on sale in India.

On the face of it, the Triber offers space, practicality and flexibility, in addition to an SUV-like profile. Versatility aside, the Triber also has much else going for it and could just throw the cat among the pigeons when it comes to like-priced hatchbacks. Only a drive will give the full picture of how the Triber is in the real world, but if you have a budget of Rs 5-8 lakh, it’s worth your while to give the new Renault a serious look.