The new 7-seater, which is based on the Kwid’s platform, is powered by a 1.0-litre petrol engine that comes with a manual gearbox. 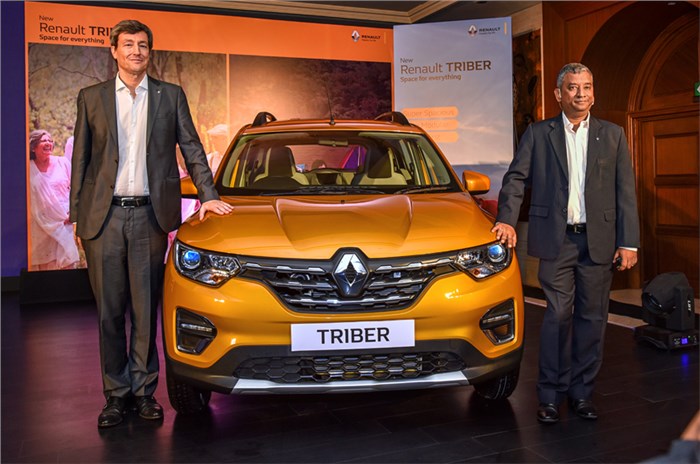 Renault has launched the all-new Triber at Rs 4.95-6.49 lakh. The seven-seat model is available in four variants and comes with one engine and one gearbox.

Powering the Renault Triber is an upgraded version of the Kwid’s 1.0-litre (BR10), three-cylinder petrol engine. It makes 72hp and 96Nm of torque and comes paired to a 5-speed manual gearbox as standard. The ARAI-rated mileage for this engine-gearbox combination is 20kpl. Renault is expected to introduce a turbocharged version of the 1.0-litre petrol engine at a later stage and an AMT gearbox option. The 1.0-litre petrol motor is BS4-compliant and will be upgraded to BS6-spec before the April 2020 deadline.

The Triber is built on Renault’s modular CMF-A+ platform that also underpins the Kwid hatchback. It measures 3,990mm in length, 1,739mm in width, 1,643mm in height and 2,636mm in wheelbase so it’s a fairly substantial car, even among sub-four-metre models. The Triber is one of two compact (under 4m) seven-seater offerings in the Indian market; the other being the Datsun Go+. With all seats in place, the Triber's boot space is all of 84 litres. However, the rear-most seats can be removed altogether, increasing luggage room to an impressive 625 litres. Besides the SUV-like styling, the Triber's 182mm of ground clearance also helps the model look more muscular.

While the Triber looks to be a bit of a niche model – offering seating for seven but at a price point between the Datsun Go+ (Rs 3.86-5.94 lakh) and the Maruti Suzuki Ertiga petrol variants (Rs 7.55-10.06 lakh) – its Rs 4.95-6.49 lakh* price tag will see it compete against the Maruti Suzuki Wagon R 1.0 (Rs 4.34-5.33 lakh) and the petrol-powered versions of the Hyundai Grand i10 (Rs 5.02-7.09 lakh) and Ford Figo (Rs 5.23-7.70 lakh). The French brand hopes that the Triber's compact size, spacious interiors and flexible seating configurations, coupled with the price, will help draw buyers from similar-size B segment hatchbacks.

The Triber will retail from Renault India's network that comprises of over 350 outlets. 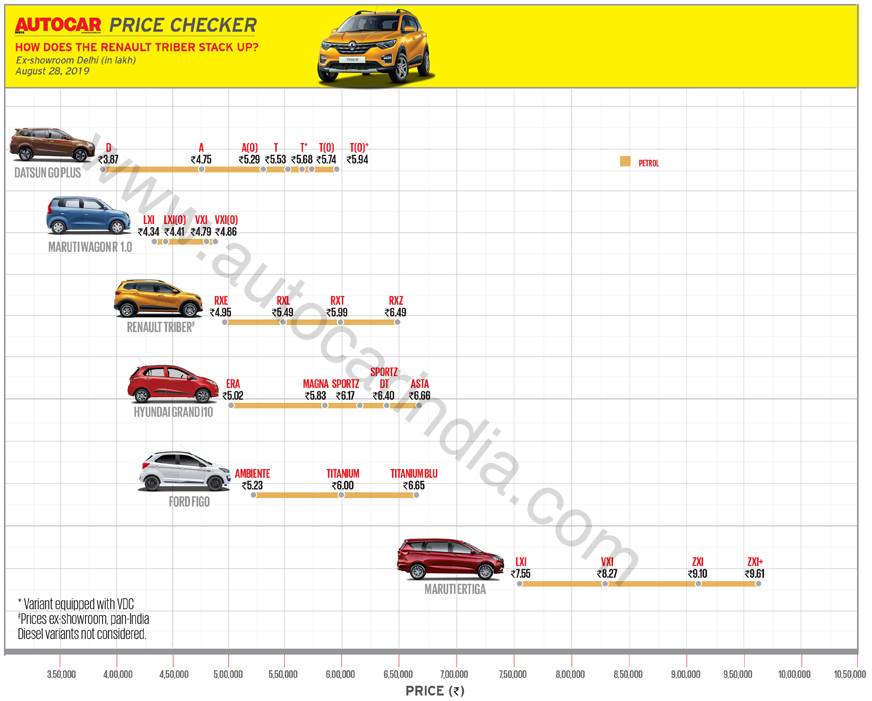 Open image in new tab to zoom in.