5-speed AMT gearbox option to be available in the RxL, RxT and RxZ trim levels; expected to cost about Rs 50,000 more than manual counterpart. 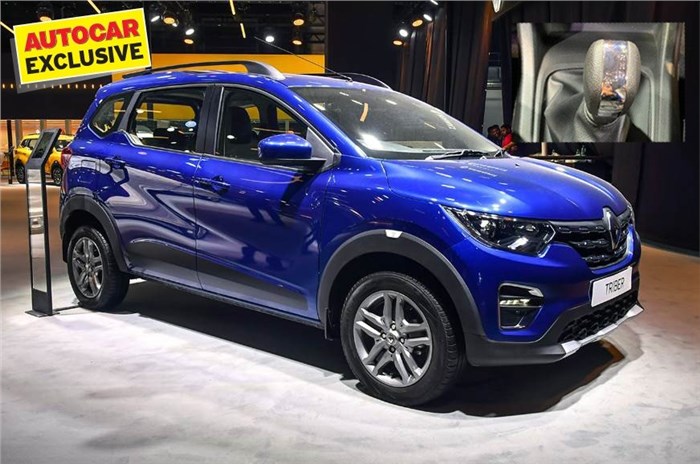 With a launch expected soon, new details have emerged about the upcoming Renault Triber AMT. The long-awaited automatic version of the Triber will go on sale in three variants, with all but the base RxE trim being offered with the AMT gearbox option.

The Triber AMT made its public debut at the 2020 Auto Expo in February this year. Renault had confirmed the AMT gearbox option for its compact 7-seater when it first revealed the Triber in June 2019, though it only launched the car with a manual transmission later in the year.

Coming to differences, the automatic Triber will looks near-identical to the manual model that’s currently on sale, with the only differences expected to come down to the gear lever inside the cabin and the 5-speed AMT gearbox. The model shown at the Expo wore some additional cosmetic bits but it is not confirmed if those will be available as standard on the automatic model.

In terms of equipment, the AMT models are likely to offer the same levels of kit as their manual counterpart. Expect the fully loaded Triber RxZ AMT to get features like an 8.0-inch touchscreen infotainment system with Apple CarPlay and Android Auto, a digital instrument cluster, AC vents on all three rows, keyless entry and go, and projector headlights with LED DRLs as standard.

In terms of pricing, the AMT is likely to cost about Rs 50,000 more than its manual counterpart.

Renault has high hopes for the AMT variant, with the Triber having helped Renault secure positive sales growth in a lacklustre FY2020. Fabrice Cambolive, SVP, chairman of AMI-Pacific, Groupe Renault, in an interview with Autocar India earlier in the year, said, “I think the automatic version should bring 30 percent customers more on top of what we are doing now. It means Triber should be one of the bestsellers in our line-up for the next two years.”

Following the introduction of the AMT, Renault is also readying a turbo-petrol iteration of the Triber that will be powered by a new 1.0-litre, three-cylinder turbo-petrol HR10 engine that makes 95hp. Developed by Nissan, the unit will also be offered in the upcoming Nissan Magnite compact SUV and its Renault sibling.

Renault to exit joint venture with Dongfeng in China