The Nissan Magnite is the latest entrant in the burgeoning compact SUV space. Here’s how it compares to its rivals on the features front. 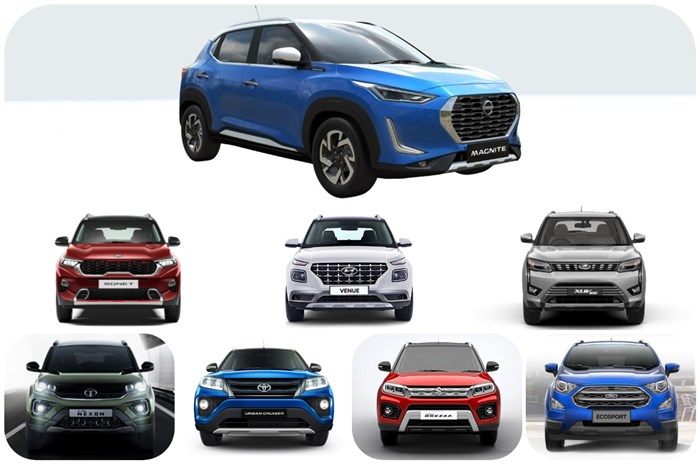 When the Nissan Magnite launches on November 26, it’ll enter what is one of the most fiercely-contested segments today. Nissan has officially revealed the Magnite compact SUV and confirmed the features that will be available on the top-spec variant. We’ve also brought you expected prices for the Magnite, but now it’s time to see how the Magnite compares to other compact SUVs on safety equipment, technology and creature comforts.

In its segment, the Magnite is not the trendsetter when it comes to safety equipment, with the Mahindra XUV300 being by far the best-equipped and also being Global NCAP’s top safety pick. On paper, Nissan’s compact SUV comes across as having a longer list of safety equipment compared to the Maruti’s Vitara Brezza and Toyota’s Urban Cruiser, although it does get a tyre pressure monitor like the Tata Nexon, Ford EcoSport, Kia Sonet and Hyundai Venue. It lags behind in terms of the number of airbags on offer compared to the XUV300, EcoSport, Sonet and Venue. The XUV300 and Sonet are the only models here to come with front parking sensors. It’s worth mentioning here that the Magnite is the only one in the segment to have a 360-degree camera.

In terms of the creature comforts and convenience features on offer, the Magnite is well-equipped. The top-spec variant brings auto climate control, leatherette seats, LED headlights, and cruise control, with an air purifier, ambient lighting and a wireless smartphone charger available as options.

The Magnite is better equipped than the likes of the Nexon, Vitara Brezza and Urban Cruiser, especially taking into account some of the optional extras available with the Technology pack. However, the Magnite misses out on a sunroof, which is a popular feature today and available with nearly every other compact SUV save for the Vitara Brezza and Urban Cruiser.

When it comes to in-car tech, the Kia Sonet clearly leads the pack, with the largest-in-class 10.25-inch touchscreen, a 7-speaker Bose sound system and a variety of drive modes. The Magnite misses out on drive modes and connected car tech like the XUV300, Vitara Brezza and Urban Cruiser, and the XUV300 offers a little bit more with its dual-zone climate control system as well as steering modes. That said, the Magnite does get a 7.0-inch, full-colour digital instruments display and also packs segment-first wireless Apple CarPlay and Android Auto connectivity.

Nissan Magnite prices are expected to start around Rs 5.5 lakh for the entry-level variant,and the range is set to max out at around Rs 9.55 lakh for the top-spec Turbo CVT model (all prices estimated, ex-showroom).

Do you think the Nissan Magnite’s features list will be a draw for potential buyers? Let us know in the comments.