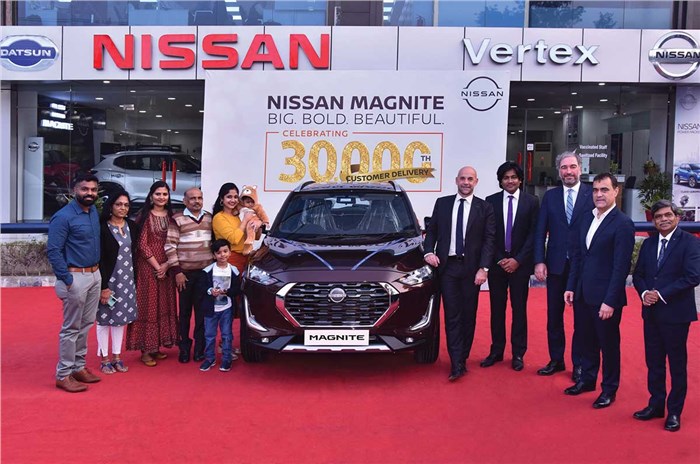 The Magnite has achieved this sales milestone in less than a year since its launch.

Nissan launched the Magnite compact SUV in India almost a year back, and the Japanese carmaker has delivered the 30,000th Magnite to a customer in Gurgaon on Friday. Launched last December for a starting price of just Rs 4.99 lakh, ex-showroom, the Magnite has turned out to be a great success for Nissan as the carmaker has raked up over 72,000 bookings in India so far.

The Magnite is a key model for Nissan in India

The Magnite has been instrumental in turning around Nissan’s fortunes in India. That is well reflected in the company’s improved market share in both the passenger and utility vehicles segments. In the PV segment, Nissan India’s share has grown to 1.38 percent (22,304 units) in the April-October period from 0.37 percent (4,431 units) a year ago.

To mark the occasion, the 30,000th Magnite was delivered to the customer in a special ceremony at a Gurugram dealership. The keys were handed over by Guillaume Cartier, Nissan chairperson for Africa, Middle East, India, Europe and Oceania (AMIEO) region, in his visit to India. The chairperson also presented Nissan Global President’s Award to the Nissan India team for the launch of Nissan Magnite, a first for the Indian division.

The Magnite comes with the choice of two petrol engines. The first is a 72hp, 96Nm, 1.0-litre, three-cylinder, naturally aspirated engine, while the second is a 100hp, 160Nm, 1.0-litre, three-cylinder, turbo-petrol unit. In terms of gearbox options, both engines come paired with a 5-speed manual as standard. The turbo-petrol additionally gets the option of a CVT automatic, but in this configuration the engine’s torque output drops by 8Nm.

Top-spec variants of the Magnite have been in greater demand, thanks to the mix of features and value unlike most other models in this segment. These variants come loaded with goodies like an 8.0-inch touchscreen infotainment system with wireless Apple CarPlay and Android Auto connectivity, a 7.0-inch TFT display for the instrument cluster, voice recognition technology, a 360-degree surround view camera, a tyre pressure monitor, push-button start, cruise control and much more.