Nissan's Vitara Brezza rival will launch in India around the festive season. 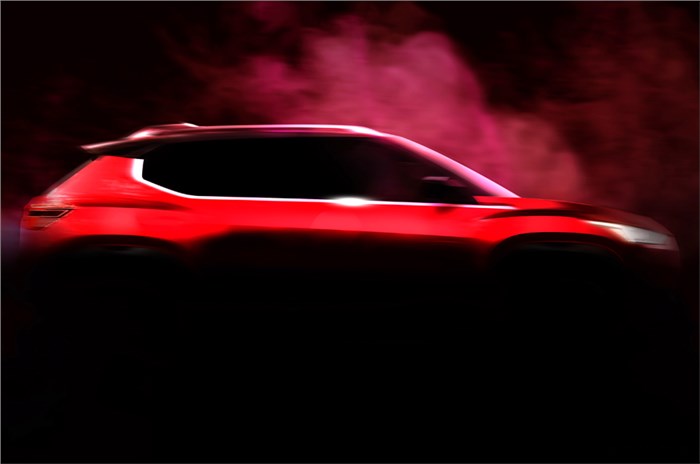 Nissan India has announced its foray into the ever-growing compact SUV market in India. The company has unveiled a first teaser image of its future SUV at an event in New Delhi, today. This new compact SUV (codename: EM2) will come to India around September 2020. Considering its sub-four-metre status, the Nissan will rival the likes of the recently updated Tata Nexon, the Maruti Suzuki Vitara Brezza petrol, Mahindra's XUV300, the Hyundai Venue and the Ford EcoSport.

The teaser image reveals the upcoming SUV's silhouette, confirming that it will have a crossover-like design similar to the Nissan Kicks, rather than a more upright look seen on the Vitara Brezza and the Hyundai Venue. The new SUV will feature a floating roof design and will also get contrast paint options, as seen in the teaser image. Design cues from the newest Nissan crossover, the second-gen Juke sold abroad, can be expected on the compact SUV for India

Additionally, we can confirm that this new SUV will share its underpinnings with the upcoming Renault HBC compact SUV that is also expected to be launched late in 2020. Both SUVs will use the CMF-A platform that also underpins the popular Renault Triber.

Under the hood, the Nissan’s new compact SUV will feature a new 1.0-litre three-cylinder turbo-petrol engine (codename: HR10) that will be mated to either a 5-speed manual or an AMT gearbox. There will not be a diesel engine on offer.

While we expect a few features and creature comforts to be shared with other Nissan models on sale in India, the compact SUV is also likely to get some form of connected car technology.

Previously, this compact SUV was expected to be introduced under the Datsun brand in India as we had reported back in July 2018. However in September 2019, parent company Nissan Motor instead said that it will be phasing out the underperforming Datsun brand, which means all future products from Datsun – such as the compact SUV – will be introduced under the Nissan moniker.

Nissan Motor India also announced today that the Nissan brand will be one of the two "umbrella brands" that will operate in India, with the Datsun brand being held a "little behind".

Rakesh Srivastava, managing director, Nissan Motor India, said, "We would like to increase our commitment to the Indian market and we look forward to making Nissan the primary brand in the Indian market with multiple new premium products to going to come under the Nissan brand."

He added that, "Datsun, however, will continue to be part of the entire product portfolio and we will strengthen the value proposition of the Datsun products and will bring features for instance, the CVT automatic transmission as one of the technologies for which we find good opportunity in India.”

As reported by us earlier, Nissan won’t axe the Datsun brand anytime soon, but is likely to do it in a phased manner after the current range of products reach the end of their lifecycle and are subsequently discontinued. This could stretch till 2022 or early 2023.