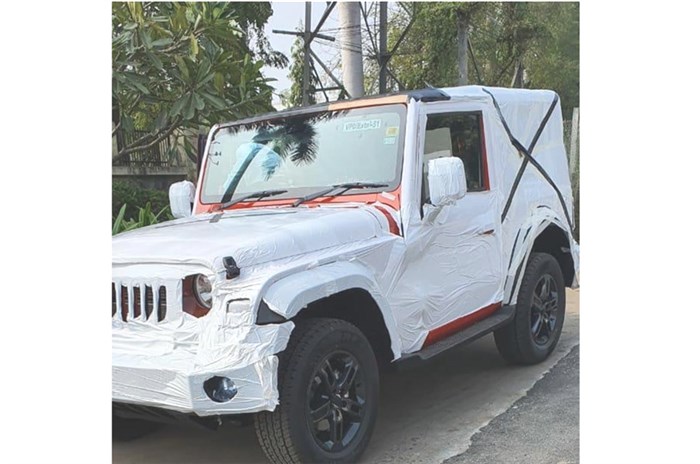 Mahindra will most likely announce prices for the 2020 Thar SUV by August this year. A first image of the new-gen SUV – covered with what looks like white plastic usually applied to a newly built vehicle before being dispatched to dealer yards – has surfaced online.

Wearing camouflage, the second-gen Thar has been seen testing on the road for more than a year now; multiple test mules have been seen with different types of cladding and they even feature a hard-top. While the final design is yet to be seen, overall, the next-gen model sticks to its roots. However, that's where the style-based similarities end. The second-gen Thar is new from the ground up and features a new chassis and body panels all around. The SUV will come with a BS6-compliant 2.2-litre diesel engine that's good for around 140hp and is mated to a 6-speed manual. An automatic gearbox is on the cards as well but may join the Thar line-up a little later. The model will also come with a new 2.0-litre petrol unit that features direct injection as well as turbocharging from Mahindra's newly introduced mStallion engine family.

As far as equipment goes, the new Thar gets black-painted 18-inch alloy wheels, as seen in the picture; LED daytime running lights are also likely to be offered. It will get a long list of features on the inside as well, as reported by us earlier. Along with an all-new dashboard design, the new-gen SUV also gets a touchscreen infotainment system with Apple CarPlay and Android Auto, a multi-info display in the instrument cluster, a manual AC, power-folding wing mirrors and multiple USB ports. The new Thar will get two airbags, ABS and a rear parking camera (with the former two being standard across the range), along with a front-facing second row of seats.

The new Thar's competition includes the all-new Force Gurkha and even the Suzuki Jimny that will come to India sometime next year.