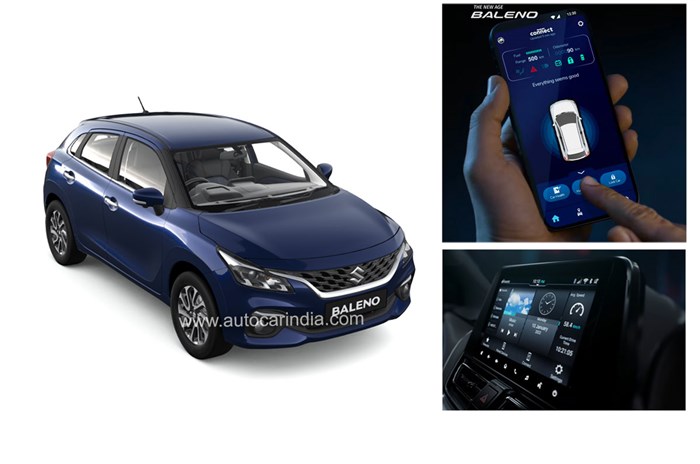 In the build up to its launch on February 23, Maruti Suzuki has revealed more details on some of the features of the new Baleno. While tech such as a heads-up display and a new touchscreen were already confirmed, the carmaker has now revealed that the Baleno will pack in a more comprehensive suite of connected car features.

New Maruti Baleno: will get Alexa support and voice assistant

The biggest takeaway from Maruti Suzuki's latest reveal is the connected car tech. While the carmaker does offer its Suzuki Connect tech as an option across a majority of its cars, the Baleno will receive an upgraded system.

The new system will build on the carmaker’s current connected platform and offer additional connectivity features including Amazon Alexa support. This will allow customers to issue voice commands to their vehicle via paired Alexa devices. It must be noted that the Baleno isn’t the first vehicle in the mass-market segment to offer Alexa support — the fifth-gen Honda City also offers the same.

Maruti Suzuki has also confirmed that its latest connected car tech will support remote commands via the user’s smartwatch as well, and the previously confirmed 9.0-inch SmartPlay Pro+ touchscreen will come with a built-in voice assistant. Also expect Maruti’s system to come packed with the usual smartphone connectivity tech such as Android Auto and Apple CarPlay.

The carmaker also re-affirmed that the Baleno will be getting segment first tech such as a 360-degree camera and a heads-up display.

New Maruti Baleno: how is it different from the outgoing model

Maruti Suzuki has made significant changes to the new Baleno both inside and out. While basic dimensions remain more or less similar, the car gets a flatter nose, with a new grille, bumper, headlamps and bonnet. Changes are more subtle in profile, while the rear gets a new bumper, tailgate and tail-lamps, while on the inside, there are notable changes like a newly designed dashboard. You can read more on this in detail here.

The engine line-up, too, is set to get an update, with the new Baleno getting a singular, non-hybrid, 90hp, 1.2-litre DualJet petrol engine. The outgoing model was available with an 83hp, 1.2-litre petrol and a 90hp, mild-hybrid petrol. Gearbox options will include a 5-speed manual, with an AMT gearbox set to replace the outgoing hatchback’s CVT unit. The new Baleno will also be more fuel efficient than the outgoing non-hybrid model.

The new Baleno will go up against the Hyundai i20, Honda Jazz and Toyota Glanza (also to be updated) in the premium hatchback segment.