New hardcore luxury off-roader is as real as it gets; India launch in late 2020. 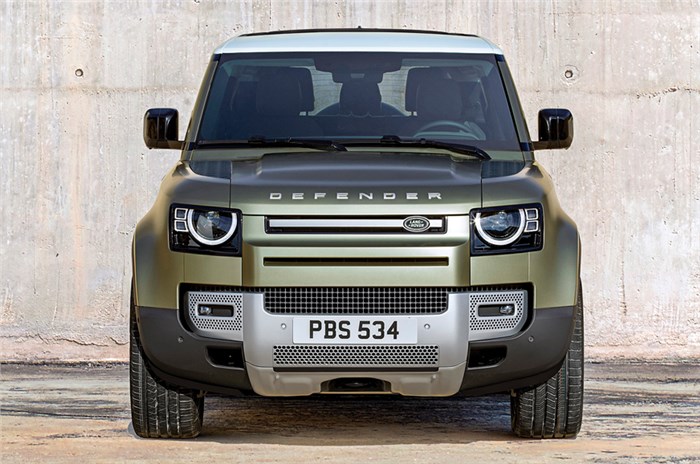 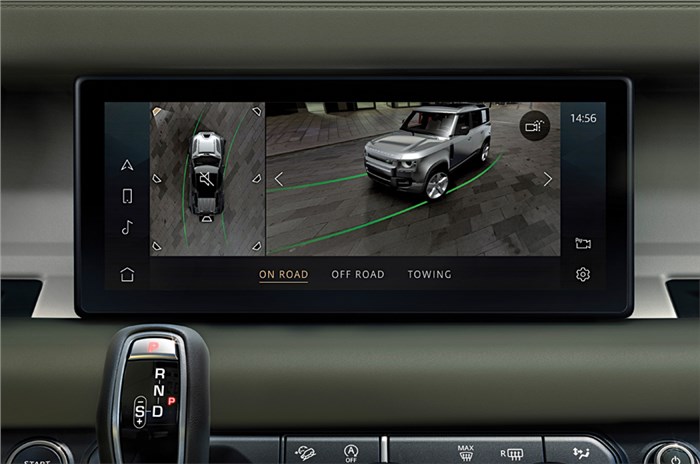 Some carry over bits from other LR SUVs, but unique design helps.

Land Rover has been in India for more than a decade, but the iconic Defender – the original off-roader that brought the brand to life – has never been on sale here in India. And this despite the fact that our conditions are all but perfect for the go-anywhere, do-anything rugged off-roader. All this is set to change in late 2020 with JLR India working on bringing the new Defender to India. The model slated for import is the long-wheelbase 110, incidentally built on a 3,022mm (119-inch) wheelbase and not a 110-inch wheelbase, as its name suggests. While the first batch of Defenders will be imported and positioned as an adventure/luxury vehicle, local production will commence later, just as JLR did with the Discovery Sport and Evoque.

Showcased for the first time at the 2019 Frankfurt motor show in September, the new Defender has actually been reborn as a mainstream SUV rather than a purely utilitarian and practical off-roader. This becomes clear when you take a close look at it for the first time. Yes, the block-like profile and the stand-up lines have been carried over. There are a whole load of details that link the two visually. The short front and rear overhangs, the flat panels and glass area, the squared-off wheel arches with the ‘rounded’ shoulders and the distinctive ‘hips’ with the individual tail-lamps stacked vertically. And look closely and you can see the rising roofline, the slot-like ‘Alpine’ skylight above the rear windows, and also all sorts of accessories, like the roof-top tents and side ladders. 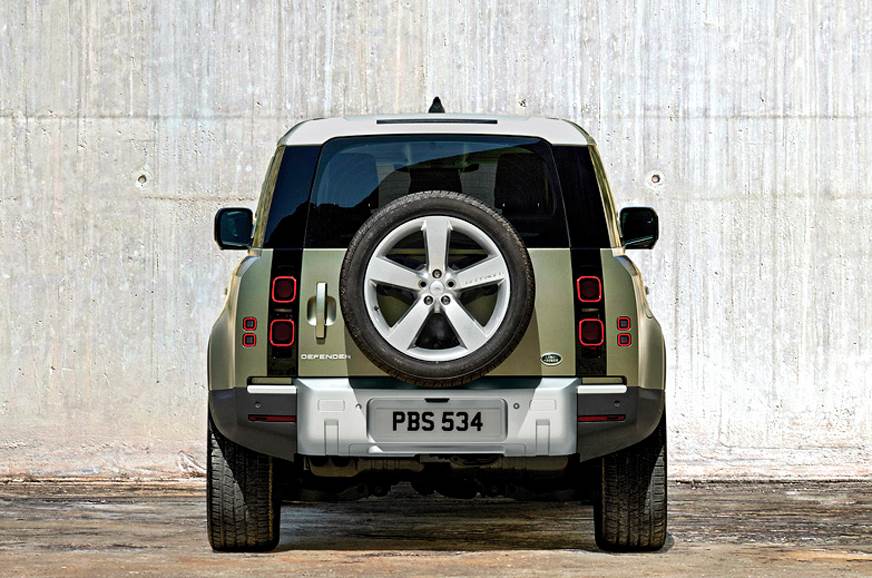 But while the design appears to be simple it is also extremely sophisticated. Land Rover design director Gerry McGovern explains, “It has a silhouette even a child could draw, but there’s nothing simple about it – especially the surfaces, which at first glance look quite raw and elemental, but they are in fact incredibly sophisticated”. And to make the new Defender look “tough but approachable”, McGovern and his team kept many of the fixtures and fittings exposed. Other details carried over onto the new Defender include the clamshell bonnet and the side- hinged boot.
Potentially, the most divisive aspect of the new Defender’s styling is the nose. Unlike the rest of the design, the nose carries very few classic Defender clues. Yes, it is impossibly tough-looking head-on, and very clearly a Land Rover, but it is also missing the prominent ‘V’- shaped bonnet or the pontoons on either side, and then the grille and headlights are not recessed either. According to JLR insiders, this has been done to get the Defender away from its utilitarian roots; the new car after all has to cut mustard as a luxury car. 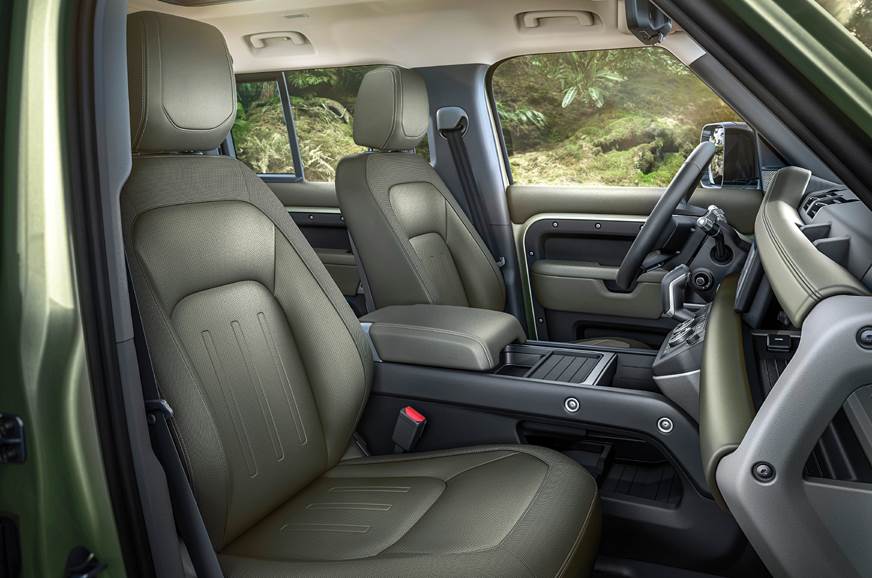 Front seats are large and supportive, even for large frames.

Luckily, this is something it manages effortlessly once you climb into the cabin. Quality levels, to begin with, are very high, and then what gets your attention is the truly cool design. Nothing is overdone when it comes to the detailing, and what helps is that the clean one-piece dash and floating centre console are surrounded by tough-looking features like riveted grab handles. JLR has also provided a 10.0-inch touchscreen that the company now claims is more intuitive to use (around 50 percent less key strokes required per instruction). What’s interesting is that with the dash-mounted gear lever freeing up space, the Defender can also be configured to seat three abreast up front. 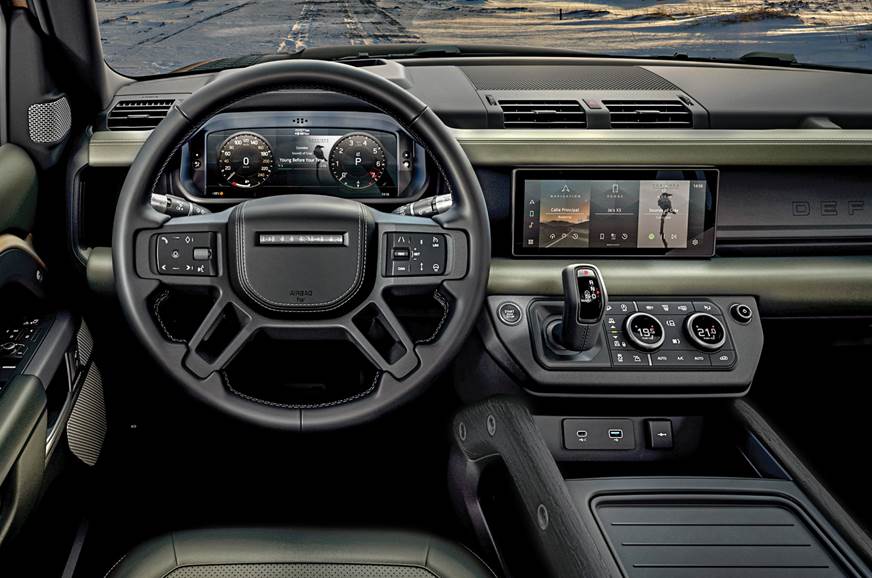 Grab handles and other riveted details help make the minimalist interior stand out.

To emphasise the car’s off-road capabilities, Land Rover’s has given the new Defender a huge 291mm ground clearance, a 38-degree approach angle and 40-degree departure angle. Water-wading depth is an incredible 900mm.

The new Defender code L663 sits on Land Rover’s D7x platform, with ‘x’ standing for ‘extreme’. There is no ladder- frame or dedicated chassis, unlike the current Jeep Wrangler, and no rigid axle for better wheel articulation. The company, however, says the aluminum monocoque is several times stiffer than that of the outgoing Defender – by far the stiffest it has produced. 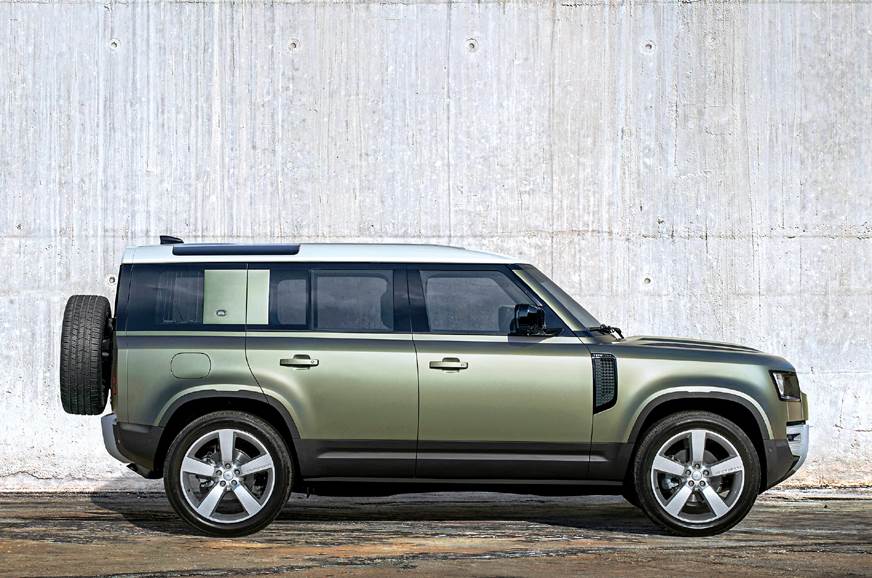 To make it suitable for off-road use, it now gets permanent four-wheel drive, a choice of independent air or coil-spring suspension, a low- range transmission, locking central differential and active rear locking differential. There are also three levels of throttle and gearbox sensitivity aimed at boosting driver control. Other tech to aid off-roading include Land Rover’s Clear Sight Ground View, which displays the area under the bonnet and ahead of the front wheels on a central touchscreen.

Loaded with charm, the new Defender will be unique – comfortable and luxurious on the one hand, and extremely hardy and capable off road too. With price expected to be Rs 55-60 lakh, it isn’t cheap, but then there isn’t anything quite like it either.