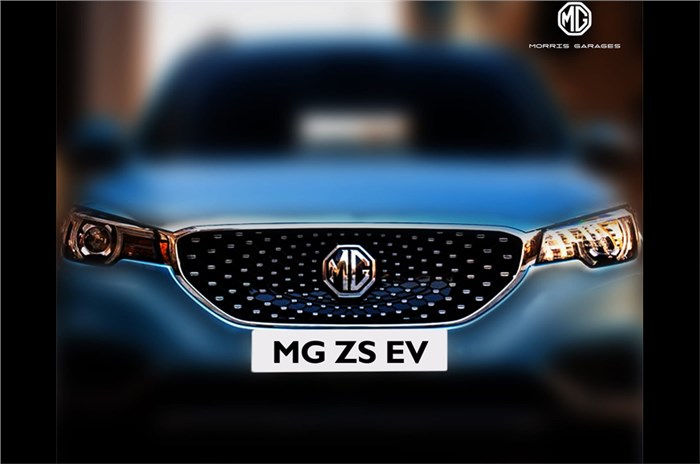 Morris Garages (MG) has only just kicked things off in our market with the introduction of the Hector SUV. The new model has been well received – despite the current situation in the automotive industry in India – and MG India is looking to capitalise on that. The brand has officially released the first teaser for its next offering, the MG ZS EV, via its Facebook page.

The teaser image only showcases a head-on, nose shot of the ZS EV. In terms of design, the ZS EV looks very similar to its internal combustion engine-counterpart on sale in international markets – the ZS. The main distinguishing factors between the two SUVs is that the ZS EV has a different front grille design with a charging port tucked in behind, new-design five-spoke alloy wheels and ZS EV badging on the outside. MG had revealed a facelift for the all-electric ZS at the 2019 Chengdu motor show but the teaser revealed by the Chinese-owned British brand shows that India will get the pre-facelift model.

On the mechanical front, the ZS EV is expected to come equipped with the same 44.5kWh battery pack, which is capable of going 262km of a single charge (on the WLTP test cycle), as the model on sale in UK, Thailand and China. With a 7kW AC power supply, MG says the battery will take 7 hours to charge to full, though a 50kW DC fast charger would be able to charge the battery to 80 percent in 40min. A synchronous electric motor that develops 143hp and 353Nm of torque drives the front wheels.

Coming to charging facilities, MG will collaborate with a domestic partner to set up home charging points for ZS EV owners, for an additional cost. The brand has also has teamed up with Fortum (a Finnish energy company) to install India’s first 50kW DC fast chargers at its dealerships across the five Indian cities – Delhi-NCR, Mumbai, Hyderabad, Bengaluru and Ahmedabad – where MG will retail the ZS EV.

When it arrives at the beginning of next year, MG Motor India is expected to price the electric SUV around Rs 25 lakh (ex-showroom). You can read our exclusive review of the MG ZS EV in the 20th anniversary issue of Autocar India, which is out on stands now.