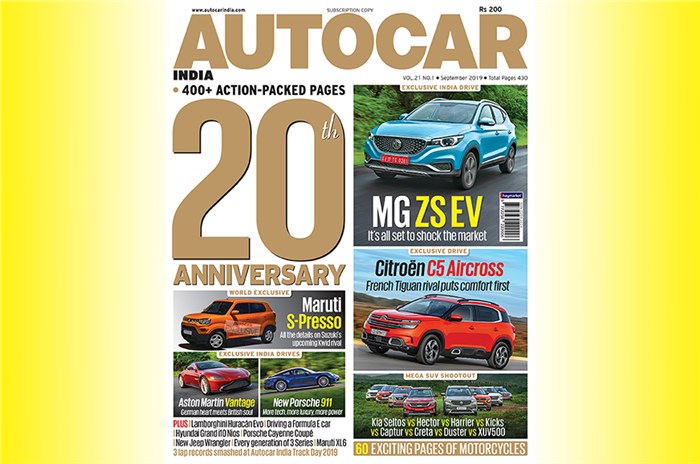 September 2019 marks our 20th Anniversary, and to celebrate, we’ve packed the issue with a truckload of memorable reads: Exclusive drives of the MG ZS EV, Citroen C5 Aircross, a massive midsize SUV showdown and a world exclusive picture and details of the Maruti Suzuki S-Presso.

For our 20th Anniversary issue, we’ve strung together a line-up of stories that’ll have you hooked. First up is an India exclusive drive of the MG ZS EV, and an exclusive spin in Citroen’s first model for India – the C5 Aircross. To go with those, we have two more exclusive India drives of the all-new Porsche 911 and Aston Martin Vantage. Plus, there is the massive comparison test of midsize SUVs, where the Kia Seltos takes on the MG Hector and other rivals. Also big in this issue are a world exclusive first look at the Maruti Suzuki S-Presso, which will soon rival the Renault Kwid, and the full report from the Autocar Track Day 2019. Then there are some specials, including a drive in two generations of Formula E race cars, a drive in the humongous Caterpillar 777E dump truck, and a feature where all seven generations of the BMW 3 Series come together for the very first time in India. There are even 60 whole pages of two-wheeler action, including some tasty comparison tests, juicy news from the industry, and features you’ll enjoy reading. Here are the highlights:

Now in its eighth generation, the Porsche 911 sticks to the tried-and-tested formula – but is that a bad thing?

MG's second model for India will also be its first EV for our market, and we’ve taken it out for an exclusive India drive to see what this Hyundai Kona Electric rival has to offer.

We bring you the first picture and all the details of Maruti Suzuki's S-Presso, which arrives in September to take on the Renault Kwid.

As we found out in an exclusive India drive this month, the new Aston Martin Vantage is a car best enjoyed in the quiet of the afterhours.

With 240hp and a mid-engine, rear-wheel-drive layout, the Volkswagen Polo RX is a thrill-a-minute monster.

The C5 Aircross will open Citroen's innings in India – but will Indian buyers take to its funky design? Read the exclusive review.

The all-new Jeep Wrangler is both – more comfortable and more capable off-road.

This month, we get behind the wheel of Mahindra Racing's Gen 1 and Gen 2 Formula E race cars!

Eight midsize SUVs, one pressing question – which one is best? We pit the Kia Seltos against the MG Hector and other rivals to pick a winner.

For the first time in India, we brought together all seven generations of the BMW 3 Series to understand what makes it a cult icon.

It doesn't get bigger than this – we get behind the wheel of the humongous Caterpillar 777E dump truck.

It’s that time of the year when we head to the Madras Motor Race Track with a selection of the most fun cars and bikes launched in recent months.

It looks handsome, but what is the Leoncino 500 like to ride?

Which of these should be your first full-faired motorcycle? We find out.