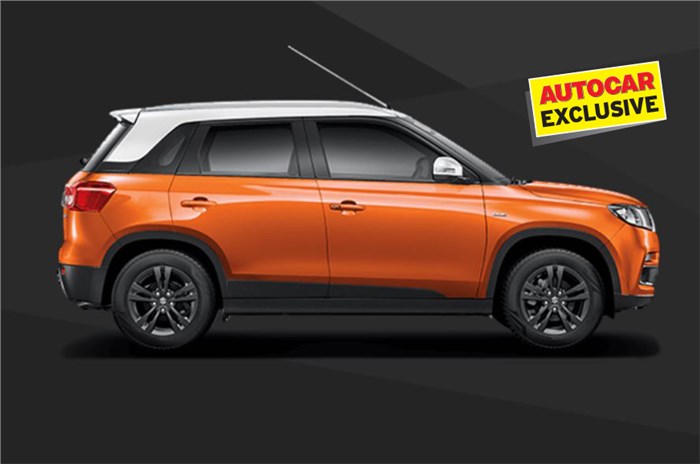 Ahead of its set Auto Expo 2020 launch, here are some new key details about the Vitara Brezza 1.5-litre petrol compact SUV.

Maruti Suzuki is all set to launch the petrol-powered Vitara Brezza; most likely on February 5 at the 2020 Auto Expo. We have been reporting about the upcoming Vitara Brezza petrol since early last year and while there are quite a few details already known, today we reveal almost everything about Maruti's upcoming petrol-powered compact SUV.

First up, apart from the mid-life updates, the Vitara Brezza will get a BS6-compliant 1.5-litre petrol engine. This powerplant already sees duty in other Maruti Suzuki models like the Ertiga and the Ciaz and is good for105hpat 6,000rpm and 138Nm of torque at 4,600rpm. Maruti will not equip the Vitara Brezza facelift with the 1.3-litre diesel motor.

Coming back to the 1.5-litre petrol, there will be two gearbox options on offer – a 5-speed manual and a 4-speed torque convertor automatic transmission. Contrary to earlier predictions, the 1,462cc petrol engine will get Maruti Suzuki’s fuel-saving Smart Hybrid tech, albeit only on the automatic variants. According to sources, this means that the Vitara Brezza 1.5 petrol with the manual gearbox will not feature stop-start system and integrated starter generator in order to keep prices competitive. The SUV will not feature ESP but will come with a hill-hold assist feature.

As far as cosmetic updates go, the Brezza will getan altered design up front, with a slightly wider chin – clearly split in two sections. It will get larger fog-lamp housings and the turn indicators have now been moved to the main headlamp unit. While the headlamp shape remains the same, the inserts are all-new with chrome bits and a large LED daytime running lamp positioned at the bottom. The refreshed SUV will also get faux skid plates for its front and rear bumpers, all-black alloy-wheels for mid-spec variants, and diamond-cut alloy wheels for the top-spec ZXI+ trim that will also come with LED fog lamps. At the back, the revised tail-lamp inserts will get LED bits, and there are talks of the turn-indicator bulb being an LED unit too, giving the SUV a more premium look.

The refreshed Vitara Brezza will get two new exterior paint shades, Sizzling Red and Torque Blue. The updated SUV will be offered in three dual-tone exterior paint shade combinations too, starting with Granite Grey with an orange roof, Torque blue with a black roof and Sizzling Red with a black roof. Higher variants will also feature power-folding wing mirrors and a compact roof antenna. There are talks of wireless charging being offered on higher variants too – a first for any Maruti Suzuki vehicle.

The 2020 Vitara Brezza will feature mild interior tweaks, it will come with the new SmartPlay Studio infotainment system seen in all new offerings from the company. The screen will also double as a display for the reverse camera, which will be standard on the top-spec variant. Higher variants will get a leather wrapped steering wheel and an auto dimming rear view mirror as standard.

As far as pricing goes, the Vitara Brezza petrol will not be much cheaper than the outgoing diesel version, thanks to BS6 upgrades and having a 1.5-litre motor, the SUV will not get the excise benefits which are applicable for petrol-powered sub-four-metre vehicles that have engine capacity below 1.2 litres.

The refreshed Vitara Brezza petrol will take on the likes of the Ford EcoSport 1.5 petrol, the Mahindra XUV300 1.2 turbo petrol, the Nexon 1.2 turbo petrol (also due for a facelift) and the Hyundai Venue 1.0 turbo petrol in the Indian market. Furthermore, the SUV will see competition from Renault’s upcoming HBC compact SUV that may see a late 2020 unveil sporting a 1.0-litre turbo petrol engine.