We pit the recently launched S-Presso against its rival hatchbacks in terms of mileage. 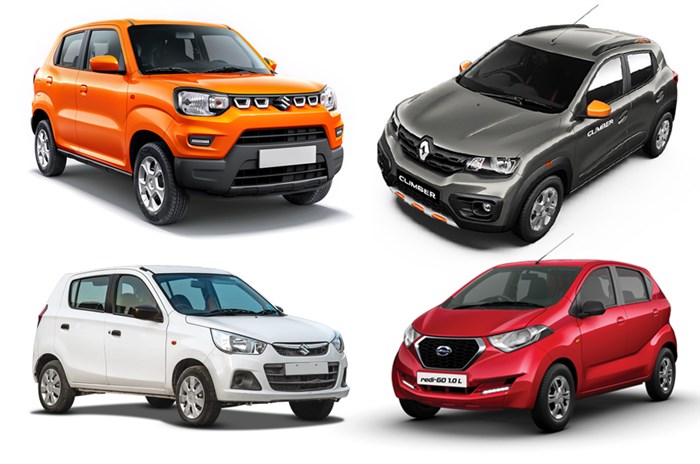 Maruti Suzuki has just launched the all-new S-Presso, which is priced from Rs 3.69-4.91 lakh. The ‘micro SUV’ comes in four trim levels – Standard, LXi, VXi and VXi+ – and is powered by a BS6-compliant petrol engine, which is a segment-first. Given below are the official ARAI-rated fuel efficiency figures for the S-Presso.

It is interesting to note that the base trims, Standard and LXi, have a lower 21.4kpl fuel economy figure compared to the 21.7kpl figure of the VXi, VXi+ and AMT variants. This is despite the lower two variants being lighter (726-740kg) than the top two and AMT variants (758-767kg). On the other hand, the lower variants get 13-inch wheels shod in 145/80 R13 rubber while the higher variants get 14-inch wheels with 165/70 R14 tyres; this factor would affect fuel-efficiency figures. Now, let’s see how the S-Presso compares to its peers, the 1.0-litre Renault Kwid and Datsun Redigo, and Maruti’s own Alto K10.

While all the models here are powered by a 1.0-litre, three-cylinder petrol engine with identical power 68hp power figures, the Kwid and Redigo’s motor produces 1Nm of torque more. All the cars here also come with 5-speed manual and AMT gearbox options.

When it comes to mileage, the S-Presso’s official figures are the lowest in this comparison, but it is also the only car here to come with a BS6-compliant engine. Its competitors’ ARAI figures are expected to drop when they are upgraded to meet the new norms, which would provide a better indication of just how fuel-efficient the new Maruti is. For now, the Alto K10 is the most fuel-efficient, with a figure of 23.95kpl for both, the manual and the AMT. Renault’s Kwid, whose facelift is slated to launch tomorrow, returns 23.04kpl for the manual and 24.04kpl for the AMT. The Redigo, meanwhile, is rated at 22.5kpl for the manual and 23kpl for the AMT.

Coming to its pricing, Maruti launched the S-Presso at an introductory price of Rs 3.69 lakh; the top-spec AMT-equipped variant costs Rs 4.91 lakh. While the Maruti is pricier than rivals (the Renault Kwid undercuts it by a small margin), as mentioned earlier, it’s the only one to come with a BS6-compliant engine. Expect rival prices to rise as well when they are upgraded to meet the emission norms. Considering this and the fact that the S-Presso’s pricing isn’t too far from its rivals, the Japanese brand could have another money-spinner on its hands.