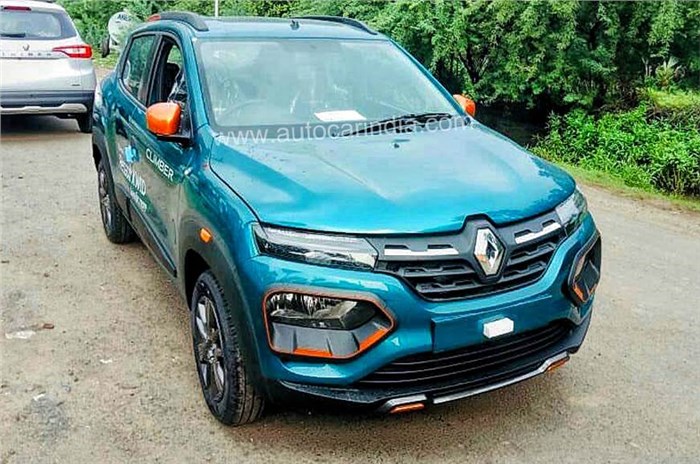 Renault will announce pricing for the refreshed Kwid on October 1, 2019. The price announcement will take place exactly one day after the market launch of the Maruti S-Presso which is pegged to be the Kwid's arch rival, thanks to its SUV-like design.

The heavily updated Renault Kwid borrows its styling from the Renault KZ-E electric car that was unveiled in China earlier. The model gets a split headlamp setup up front where high mounted LED daytime running lamps are positioned above the headlamp units in a separate enclosure. The headlamp units are actually placed a little lower than the usual location. This arrangement is similar to the much more expensive MG Hector and Tata Harrier SUVs. It also gets a new front bumper with a faux skid plate in the top-spec Climber variant.  Additionally, the model will also feature a new wheel design depending on variant.

On the inside, the refreshed Kwid gets slightly tweaked dashboard design, a new and larger Triber-like 8-inch touchscreen with Apple CarPlay and Android auto and a new steering wheel design. The Kwid AMT variant will see the round gear shifter repositioned to the centre console instead of the dashboard in the pre-facelift model. It will also get the new full-digital instrument console like the Triber that includes a speedometer and a tachometer as well.  A new seat fabric and tweaked door pad trim will round up the updates on the new Kwid's interior.

Under the hood, Renault is expected to continue to offer the same 800cc and the 1.0-litre engine options as the outgoing model. The 800cc Kwid will come with a five-speed manual only while the 1.0-litre variant will get an optional AMT gearbox as well, on the top variant.

The refreshed Kwid will continue to be sold with BS4 engines for now. Renault will introduce BS6 compliant engines closer to April 2020 deadline.

While the Kwid rival other similarly priced hatchbacks in India, it will, as mentioned above, see a new and more direct competition from the Maruti Suzuki S-Presso, a new SUV-like hatchback that will launch on Monday, September 30, 2019.