All-new Celerio will be the first of many updated Maruti Suzuki models that will launch in this financial year. 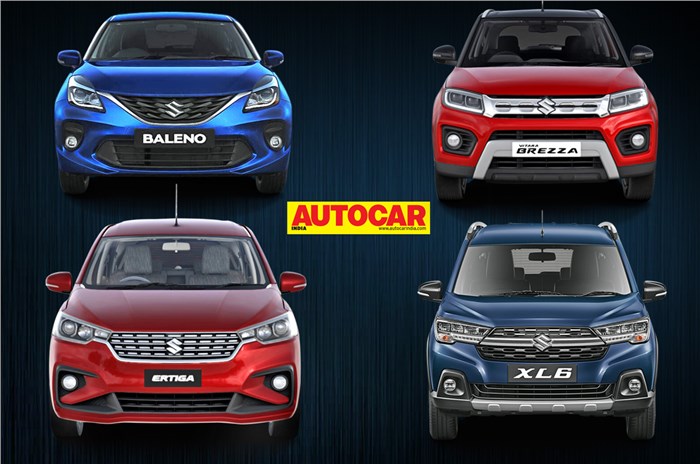 Maruti Suzuki is gearing up to introduce an assortment of new and refreshed models to its India line-up over the coming months. As per our sources, there are four facelifts and one all-new model in the pipeline, set to be launched within the 2021-2022 financial year (which ends in April 2022). We have compiled all the cars headed our way, below.

Upcoming Maruti hatchback, SUV and MPV updates for 2021 and beyond

The Maruti Baleno is the bestselling premium hatchback in India, consistently making it on the monthly top 10 selling cars list. However, it has been on sale since 2015, and has since received a single facelift in 2019, which brought with it some cosmetic updates and minor feature upgrades. It is time for a change and that’s exactly why the carmaker will give the Baleno a major update. We are told the exterior will receive a heavily reworked front end as well as refreshed overall styling. The interiors are also expected to be updated with new safety and convenience features, to match the ones seen on its newer rivals. There are no major mechanical updates are expected.

Maruti introduced the second-gen Ertiga MPV in our market back in 2018. It improved on its predecessor in almost every category, offering a spacious, comfortable and practical 7-seat package. Given that the Ertiga has been on around for roughly three years now, Maruti will be giving it a facelift. This facelift will likely consist of minor styling and feature updates, similar to the ones seen on the Swift and Dzire. The updated Ertiga will continue to be sold with its current petrol engine.

The XL6 is essentially a more premium, 6-seat version of the Ertiga, that was launched in 2019. Since Maruti is updating the Ertiga, it is only natural that the carmaker will also update its more upmarket counterpart. Hence, the XL6 facelift is also expected to receive similar cosmetic tweaks as the refreshed Ertiga. Sources tell us that the XL6 could come with a 7-seater option with a bench seat for the second row, and even better looking alloy wheels to make it look more appealing from the outside.

While the Vitara Brezza was facelifted in 2020, with some minor styling tweaks and the switch to being a petrol-only model, Maruti is expected to give it another cosmetic update. This has partially been fuelled by the fact that this generation of the Brezza has been around since 2015, and also because the competition in this segment is fierce, with many new models launched in this past year itself. Expect more news on the refreshed Vitara Brezza to trickle out in the coming months.

Maruti Suzuki is currently in the final stages of development for the second-gen Celerio hatchback. As a matter of fact, we received a glimpse of the new Celerio’s design when its patent rendering surfaced online, showcasing its more rounded styling. The new-gen Celerio is also going to be based on Maruti Suzuki's modular Heartect platform and is expected to come with two petrol engine options – a 1.2-litre, four-cylinder unit and a 1.0-litre, three-cylinder. It is also going to be larger than the outgoing Celerio and is expected to get a more feature rich interior.