The XUV700 unveiled ahead of its scheduled launch in October. 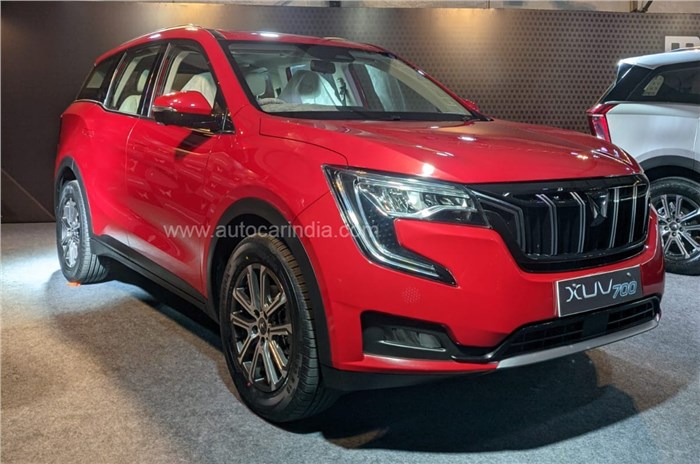 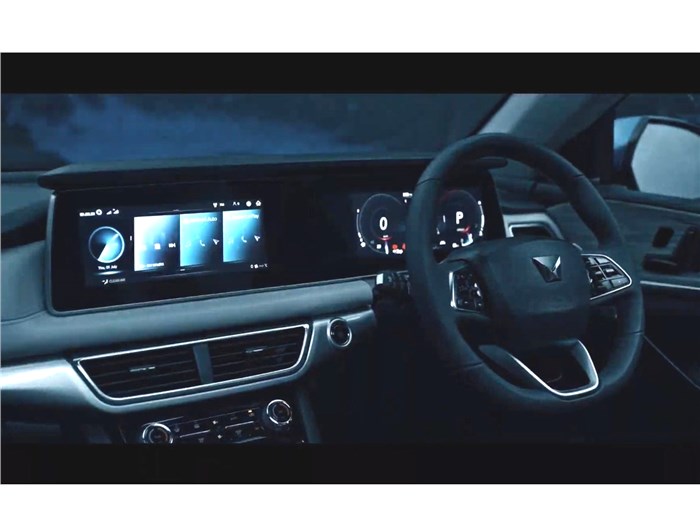 The highly anticipated Mahindra XUV700 SUV has just been revealed, ahead of its launch. The XUV700 was originally designed as the next-generation XUV500, though Mahindra later decided to reposition the model due to its plan of massively expanding it SUV portfolio. Thus as we previously reported, the XUV500 nameplate will return in 2024, though as a Hyundai Creta rival.

The decision to expand its SUV range is pretty obvious, as Mahindra intends to play to its strength in a market that has seen tremendous, sustained growth in the segment. To that extent, Mahindra has even introduced a new logo that will be worn by exclusively by its SUV range, with the XUV700 being the first model to do so.

The base MX Series variants of the new XUV700 are shockingly priced from  Rs 11.99 lakh for the MX petrol manual and Rs 12.49 lakh for the MS diesel manual. The feature-laden AX series trims - the AX3 petrol manual will start from Rs 13.99 lakh, and AX5 petrol manual will cost Rs 14.99 lakh. All the prices that have been revealed are for the 5-seat versions. Mahindra will announce complete pricing for the XUV700 line-up sometime in October this year.

While the starting price for the entry level XUV700 variants remains extremely competitive, it remains to be seen if Mahindra is able to continue its aggressive pricing strategy with the higher variants equipped with features like an automatic gearbox, ADAS safety tech and the 3D sound system by Sony.

When looking at the XUV700’s design, it’s easy to see the ties to its predecessor, especially when you look at its stance and proportions. However, there is plenty that is new here, such as the grille design with its outwardly bent vertical bars, the new headlights with massive C-shaped DRLs that drop down into the bumper, pop-out door handles that sit flush with the body, large and angular tail-lights, and the twin five-spoke alloy wheels.

On the inside, it’s clear that Mahindra has gone with a clean and modern design. The dashboard is dominated by a dual 10.25-inch screen layout – one for the infotainment and the other for the instrument cluster – housed in a single, massive panel. The infotainment system uses the brand’s newly developed AdrenoX interface with in-built Amazon Alexa virtual assistant for carrying out a variety of voice commands.

Mahindra has also packed the XUV700 with a host of other features, including wireless Android Auto and Apple CarPlay connectivity, wireless charger, panoramic sunroof, auto booster headlights, dual-zone automatic climate control, air purifier, leatherette upholstery and dashboard inserts, an electronic parking brake, and a custom-built 12 speaker setup – including a subwoofer – with 3D surround sound that has been designed by Sony.

Another area where Mahindra has gone all out with the XUV700 is the safety tech on offer, and the biggest talking point here is the ADAS (Advanced Driver Assistance Systems). It includes Forward Collision Warning (FCW) – which warns you of a possible collision and if you don’t react, it uses Autonomous Emergency Brakes (AEB) to stop the car. Other features include lane departure warning, lane keep assist, adaptive cruise control, smart pilot assist, traffic sign recognition and driver drowsiness detection.

In addition, the XUV700 also comes with seven airbags, ABS with EBD, customisable voice alerts for speeding, and seatbelts with lap and retractor pre-tensioners for front seats.

Power for the new XUV700 comes from either a petrol or diesel powertrain. The 2.0-litre, four-cylinder, turbo-petrol Mahindra mStallion unit is tuned to produce 200hp and 380Nm. On the other hand, the diesel is a 2.2-litre, four-cylinder mHawk turbocharged unit that will come in two states of tune. The lower state unit (reserved for the entry level version) will produce 155hp and 360Nm, while the unit in higher variants will churns out 185hp and 420Nm (450Nm with the automatic gearbox). The diesel engine also comes with four drive modes – Zip, Zap, Zoom and Custom – that are claimed to alter performance and steering response.

Both engines can be had with 6-speed manual and 6-speed automatic gearbox options, though the lower-spec diesel will only be available with a manual. There is also an all-wheel-drive model on offer.

Mahindra will offer the XUV700 in two series – MX and AdrenoX (AX). The MX series has a single MX trim and will be available with a petrol engine and a lower-output diesel engine. It will have features like a 7-inch touchscreen infotainment screen, a 7-inch digital instrument cluster, Android Auto, day/night Internal Rear View Mirrors (IRVMs) and power-adjust Outside Rear View Mirrors (ORVMs) with built-in turn indicators.

The AdrenoX series on the other hand will feature three trim levels – AX3, AX5 and AX7. Starting with the AX3, it gets a dual 10.25-inch screen layout, wireless Android Auto and Apple CarPlay connectivity, built-in Amazon Alexa virtual assistant and a 6-speaker sound system.

The top-spec AX7 trim gets all of the above and additional features like ADAS, dual-zone climate control, leatherette upholstery, 6-way power adjustable driver seat with memory function, seven airbags and 18-inch alloys.

With the Alturas effectively discontinued, Mahindra has a lot riding on the XUV700 that now bears the mantle of the company’s flagship product. It will go up against formidable rivals in the five and seven seater SUV category that include the likes of the Hyundai Creta, the Kia Seltos, MG Hector Skoda Kushaq, the upcoming Volkswagen Taigun and also three row SUVs like the Tata Safari, MG Hector Plus and the Hyundai Alcazar.