XUV700 audio system to pack in 12 speakers including a subwoofer and a 13 channel amplifier. 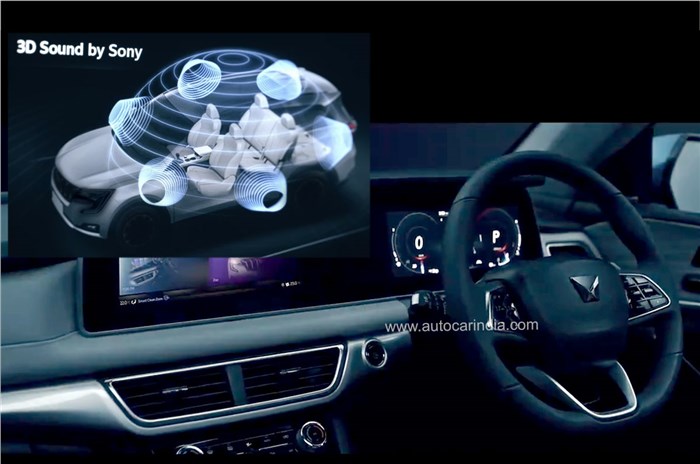 Sony says that the XUV700 will be the first car in India to use its premium 3D sound technology. The system will comprise of 12 custom-built speakers – including a subwoofer - positioned around the cabin along with a 445W 13 channel amplifier. While one can expect some to be positioned in generic locations such as the doors, dashboard and boot, spy pictures have revealed that the XUV700 will get roof mounted speakers, similar to the current second-gen Thar.

Sony claims that its system will offer “highly realistic 3D immersive spatial sound field” with an audio sweet spot covering all occupants. Additionally, the 3D audio technology will be compatible with all forms of audio inputs ranging from radio to USB to online streaming along with sound enhancing tech to improve the audio quality of compressed audio files.

Over the past few weeks, Mahindra has confirmed a number of features that will be packed into its new mid-size SUV. These include a panoramic sunroof, flush sitting door handles, AdrenoX suite with Alexa-based voice commands for the infotainment system and twin digital displays for the instrumentation and touchscreen.

Mahindra will offer the XUV700 with petrol and diesel engine options with both units set to be the most powerful in the segment. Buyers will be able to choose between a 200hp 2.0-litre turbo-petrol engine and a 185hp 2.2-litre diesel mill. Both units are set to be offered with 6-speed manual or automatic gearbox options.

The new XUV700 will go up against the MG Hector Plus, Tata Safari and the Hyundai Alcazar when it goes on sale later this year.