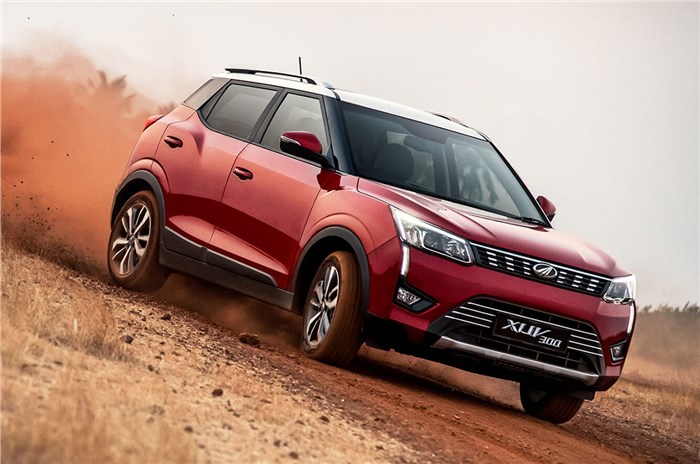 The Mahindra XUV300 compact SUV is due for a mid-life update and we have now learnt that this will be launched around January 2023. The launch was confirmed for Q3 FY2022 by Veejay Nakra, CEO for Mahindra’s automotive division, at a recent event, and here is what you can expect.

Mahindra’s high-tech mStallion series of petrol engines made their static debut at Auto Expo 2020 in three different cubic capacities – 1.2, 1.5 and 2.0 litres. The 2.0-litre engine debuted on the new Thar and has since also been deployed on the XUV700, and now it’s the turn of the smaller 1.2 in the updated XUV300.

In fact, also at Auto Expo 2020 was the XUV300 Sportz, purported as a racier variant that would use this new engine, but it was never launched. This engine was then supposed to make its debut not in a Mahindra, but under the hood of the stillborn Ford EcoSport facelift, which would have been the first product of the now-dissolved Mahindra-Ford JV.

The mStallion engines are state of the art, featuring direct injection and cylinder heads with integrated exhaust manifolds, both of which contribute to greater performance and efficiency. Moreover, they are designed to meet even future emissions norms, like those being introduced in 2023, without the need for a Gasoline Particulate Filter (GPF).

Though of the same cubic capacity as the current turbo-petrol engine of the XUV300, the new 1.2 mStallion T-GDI engine produces 20hp and 30Nm more, at 130hp and 230Nm. And speaking of which, the current engine – a turbocharged version of the KUV100’s 1.2, three-cylinder ‘mFalcon’ MPFI engine – will likely continue in lower variants of the XUV300 facelift. The 1.5-litre diesel engine is also likely to return unchanged.

Based on a shortened version of the 2015 SsangYong Tivoli midsize SUV, the XUV300 has robust underpinnings and good quality, but is now starting to show its age. Nowhere is this more apparent than the interior, where one can find some dated design elements and odd ergonomics. Expect these to get spruced up with the 2023 facelift for an altogether more upmarket look.

Bigger news, however, is that the touchscreen infotainment system – which also used a rather dated interface – will be getting a new lease on life. Expect a higher resolution, slicker graphics and perhaps even some elements from the XUV700’s Visteon-sourced AdrenoX infotainment suite. While unlikely to feature the 700’s ADAS tech, it could use a similar design for the user interface (UI), and the tech within will undoubtedly get a dose of modernisation.

These changes aside, you can expect a bolder design from the XUV300 facelift, more in line with the XUV700 and the upcoming Scorpio. That means a larger, bolder grille with bigger vertical chrome slats, new alloy wheels, redesigned tail-lamps, the possibility of full-LED headlamps and, of course, the new Mahindra logo.

The Mahindra XUV300 story in India

The Mahindra XUV300 was launched in India in February 2019, so a facelift in early 2023 sounds right on track. The compact SUV debuted with class-leading torque figures of 200Nm for the turbo-petrol engine and 300Nm for the diesel, and offered up strong performance and fun driving dynamics too.

Though pricey at the top end, it quickly established itself as a formidable rival to the Maruti Suzuki Vitara Brezza, Tata Nexon and Ford EcoSport, but has since been unable to make a huge impact on the sales charts, exacerbated only by the introduction of the Hyundai Venue and Kia Sonet.

Though it launched with just a manual gearbox, AMT versions for both engines were later introduced. Other updates include the addition of Blue Sense Plus connected car tech and a recent downward revision to the alloy wheel size on top models – from 17 inches to 16.

This upcoming facelift, however, should stand it in greater stead against its now-entrenched rivals, with more modern tech and even greater performance. However, two big rivals will also be coming first in 2022, in the form of the heavily revised Maruti Suzuki Vitara Brezza and its Toyota counterpart, the Urban Cruiser.

Will this new petrol engine make the XUV300 a more enticing proposition? Tell us in the comments section below.

Seen various leaks and videos of XUV300 Facelift which launch in Q1 or mid 2022 , that's why i am waiting for it and cancelled 2020 model but from now according to your news 2023 i just cant wait too long , we eagerly need family car .Should i wait little more or sure 2023 gonna be launching year ?

Seen various leaks and videos of XUV300 Facelift which launch in Q1 or mid 2022 , that's why i am waiting for it and cancelled 2020 model but from now according to your news 2023 i just cant wait too long , we eagerly need family car .Should i wait little more or sure 2023 gonna be launching year ?