New Scorpio to be the next big launch for Mahindra after the XUV700 SUV. 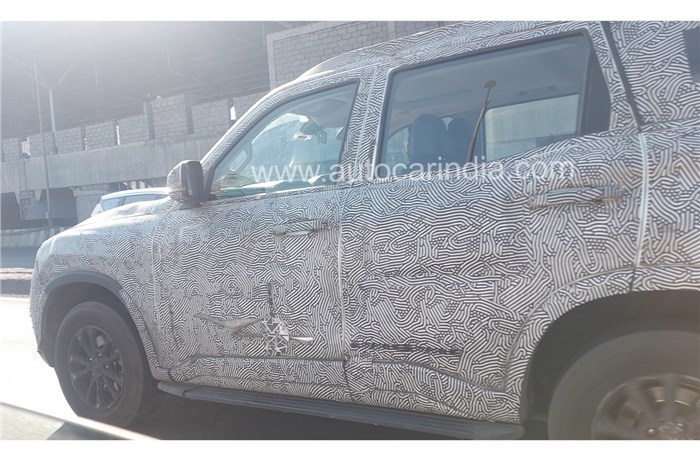 The all-new Mahindra Scorpio has been under development for long, with spy shots of the next-gen model doing the rounds on the internet since 2019. Now, three years later, Mahindra is said to be in the final stages of testing the all-new model. Pictured here is a near-production ready test mule of the new Scorpio that’s finally expected to go on sale by mid-2022. It will come with a completely new exterior design, overhauled interiors and a new set of petrol and diesel engines.

This will be the first time the Scorpio will see a full model change, since its introduction in 2002. The 2022 Scorpio is a new vehicle from the grounds up, with new underpinnings, and while the boxy and upright silhouette may be familiar, all body panels are completely new. In fact, the new SUV is also notably larger than the outgoing model. Spy shots reveal a butch and muscular stance, strong character lines, kink in the window line, side-hinged rear door and vertical tail lamps.

The interior of the new Scorpio will also be a big step up from the current model. The design is all-new, with the highlight being an MG Hector-like vertically mounted touchscreen. The interior of the new Scorpio is also expected to be a lot more premium and feature better ergonomics as compared to the outgoing car. Several switchgears such as the steering wheel, gear lever and control stalks could be shared with the XUV700.

The second-gen Scorpio will be based on an updated ladder frame chassis that also underpins the new Thar. As such, the Scorpio is also expected to share its powertrain options with the Thar.

That means, under the hood, the new Scorpio will likely feature the 2.0-litre petrol and the 2.2-litre diesel engines, with exact specifications likely to be revealed closer to the launch date. Mahindra is expected to offer both manual and automatic gearboxes with both the engines, with all-wheel drive likely to be reserved for the top-spec variants.

Current Scorpio likely to be sold alongside new model

The new Scorpio will continue to be offered in a seven-seat configuration, although the third-row seats will be forward facing, instead of the current side-facing jump seats. That’s primarily targeted for a healthy Global NCAP safety rating, however, Mahindra still has a huge audience for the Scorpio with side facing seats and it will likely retain it in lower-spec trims. The new Scorpio, meanwhile, will be positioned a notch above and sold with a slightly new and changed moniker.

The new Mahindra Scorpio is expected to debut in the first half of this year, with prices expected to overlap the lower-spec variants of the XUV700. Upon launch, the Scorpio will have no direct rival in the market as there aren't any three-row ladder-frame SUVs in this price point.

Are you looking forward to the launch of the all-new Mahindra Scorpio? Let us know in the comments below.

Yes , of course. Eagerly looking forward to the launch of 2022 Mahindra Scorpio.

Yes , of course. Eagerly looking forward to the launch of 2022 Mahindra Scorpio.