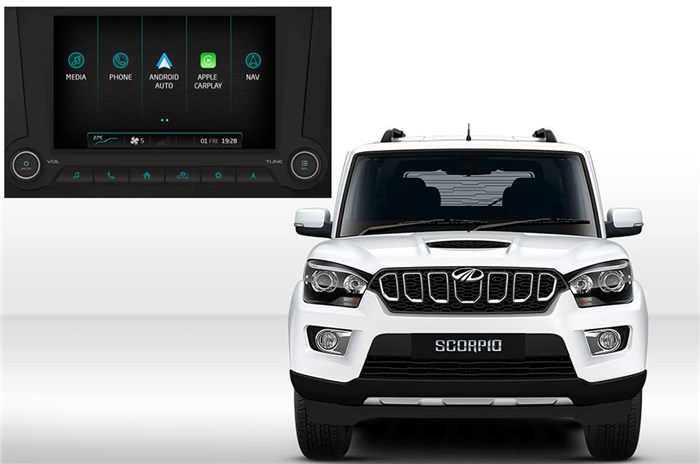 The Mahindra Scorpio has received a mild update with the addition of Android Auto and Apple CarPlay connectivity. The connectivity features are available in the top spec S9 and S11 variants of the Scorpio. Prices for the two variants remain unchanged at Rs 15.11 lakh and Rs 16.27 lakh (ex-showroom, Delhi) respectively.

The S9 and S11 trims both get a 7.0-inch touchscreen infotainment system with the lower variants either missing out on an audio system or getting a 2DIN unit. The unit in the S9 is fairly basic and prior to the addition of Android Auto and Apple CarPlay, it only offered USB, aux and Bluetooth connectivity. In the S11, the unit gets the addition of satellite navigation and also doubles up as the display for the rear-view camera (standard fit on the S11 only).

Launched in 2014, the current-gen Scorpio is nearing the end of its life cycle with an all-new model set to arrive next year. Upgraded to meet BS6 norms in April, Mahindra streamlined the line-up of its popular ladder-frame SUV, reducing the variants to just four and with only a single engine option.

The Scorpio is currently available in a choice of four-trim levels – S5, S7, S9 and S11. As it stands, the Scorpio currently lacks a direct rival with no ladder frame SUVs in a similar price bracket.

What’s to come from Mahindra?

Aside from the all-new Scorpio coming next year, Mahindra is also readying to launch the second-gen XUV500, in the first half of 2021. Both the new Scorpio and XUV500 will come with all-new 2.0-litre petrol and 2.2-litre diesel engines that made their debut in the second-gen Thar, albeit in different states of tune. Also on the cards is a more powerful 130hp version of the XUV300 turbo-petrol powered by the company’s 1.2-litre mStallion petrol engine.

The new XUV 500 will also form the basis for a Ford SUV, designed by Pininfarina. The Ford C-SUV will have an all-new exterior, a new interior and its ride and handling will be true to Ford's DNA.