Everything you need to know about the new three-row Jeep Meridian that’s set to launch in the coming months. 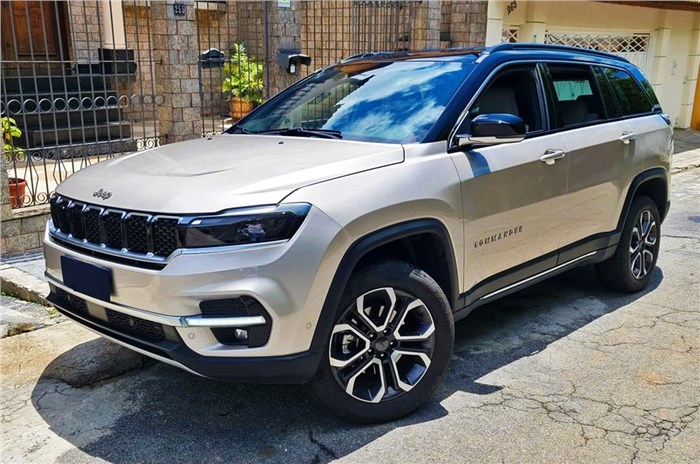 Jeep is all set to expand its line-up in India with the launch of three new models over the course of this year. One of these models is going to be a highly anticipated three-row SUV, Meridian, that’s already on sale in select South American markets as the Commander. We have compiled all the key details you should know about Jeep’s upcoming SUV below.

1. Shares platform and some other bits with the Compass

For this new three-row SUV, Jeep has decided to use the platform of its popular Compass SUV. However, the platform has been heavily updated to accommodate an additional row of passengers. The Meridian not only has a longer wheelbase but also a bigger rear overhang and larger rear doors (compared to the Compass) to aid ingress and egress of occupants in the third row.

2. Will look almost identical to the Jeep Commander

While some design aspects of the Meridian will be the same as the Compass, there will also be plenty of styling cues taken from the new Grand Cherokee, just like we have seen on the Commander sold abroad. These will include more rectangular headlights, restyled front and rear bumper, an upright tailgate and slimmer tail-lamps. With these design changes and the bigger footprint, there will be plenty to differentiate the new Meridian from the smaller Compass.

3. Will be generously equipped

In terms of equipment, we expect to see all the features from the top-spec Compass making it to the Meridian. So, the new SUV will come kitted with a 10.1-inch touchscreen infotainment system with wireless Apple CarPlay and Android Auto support, a 10.25-inch digital instrument cluster, electrically adjustable driver and passenger seats, ventilated front seats, a wireless phone charger and a panoramic sunroof. While the Brazilian-spec Commander has only been revealed in a seven-seat layout, the India-spec Meridian could also get a six-seat layout with captain seats in the middle row.

4. Will come with a diesel engine option

Powering the Meridian will be the tried and tested 2.0-litre, four-cylinder Multijet turbo-diesel engine that has been in a number of SUVs in India. However, the unit in the Meridian will be tuned to make more power – around 200hp, to cope with the added weight of the Meridian. This engine will also come paired to a 9-speed automatic gearbox and an all-wheel drive system as standard. A 48V mild-hybrid version of this powertrain could also be offered in our market.

The Jeep Meridian is slated to be launched in India around mid-2022 and is expected to be priced between Rs 30 lakh-35 lakh (ex-showroom). Once launched, it will not only aim to compete with the recently updated Skoda Kodiaq but also potentially take on some of the body-on-frame SUVs like the Toyota Fortuner and MG Gloster.

What are your opinions about the upcoming Jeep Meridian? Let us know in the comments section below.