Jeep Compass Trailhawk, Meridian and Grand Cherokee will come to India this year. 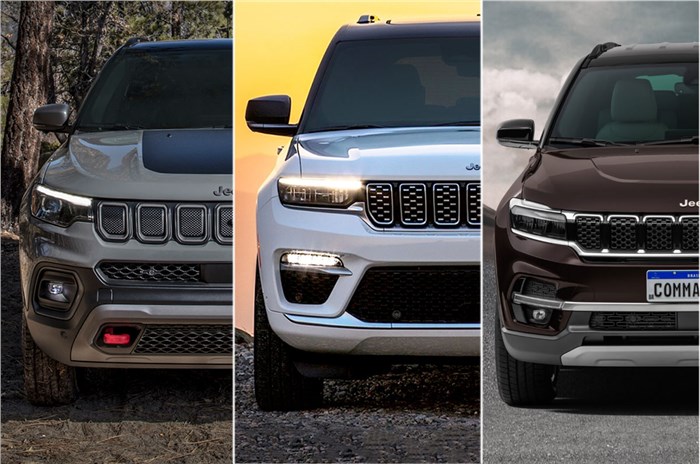 Jeep is set to consolidate its India line-up with the introduction of two all-new SUVs in the market, along with the return of the Trailhawk variant of the Jeep Compass. The Trailhawk is expected to be the first of the new Jeeps to launch in India this year, with the much-awaited Meridian and new Grand Cherokee set to follow.

While the standard Compass received a facelift in January last year, Jeep did not bring the updated Trailhawk to the Indian market, thus discontinuing the variant. Now, a year later, the Trailhawk is set to rejoin the line-up, though it’s only expected to be manufactured in limited numbers.

As with the pre-facelift model, the Trailhawk could pack in some more off-road-focused hardware including a different four-wheel-drive system to the standard Compass. Expect further differentiation to come via cosmetic elements such as variant-unique bumpers, accents and alloy wheel designs.

As before, the Trailhawk is likely to sit atop the Compass line-up and come with all the bells and whistles of the fully-loaded Compass. The Trailhawk is expected to launch by February and, as before, it will be a diesel-only variant.

Next in order is expected to be the much awaited Meridian that made its global debut as the Jeep Commander last year. Based on the Compass’ underpinnings, the Meridian is a larger SUV than its sibling, being stretched in both, overall length and wheelbase to accommodate a third row of seats. In terms of overall design, the Meridian will share certain aspects with the Compass, but as seen on the Commander, there are plenty of unique design details to help set the two SUVs apart.

Inside, the Meridian’s cabin will share the dashboard with the Compass, with the major differences expected to come down to the third row of seats, trim inserts and upholstery.

Given its larger size, the Meridian will also get a more powerful diesel engine. The 170hp, 2.0-litre  diesel from the Compass will be bumped up to develop 200hp and may feature mild-hybrid technology, which should further aid in fuel economy. The unit is expected to come solely with a 9-speed automatic gearbox, with power sent to all four wheels.

The Meridian is expected to go into production in the coming months, with a launch likely around June this year. Prices are likely to start around the Rs 35 lakh mark.

The Grand Cherokee was one of Jeep’s inaugural products in India, alongside the Wrangler. Now, the name plate is set to return with the all-new model that made its global debut last year. Available in some global markets in two sizes – Grand Cherokee and the larger three-row Grand Cherokee L – we might only get the standard 5-seater SUV, though the bigger news is that the model is expected to be locally assembled in India. The previous Grand Cherokee was a CBU import.

The new Grand Cherokee features an evolutionary design over the outgoing model, with design details borrowed from Jeep’s Grand Wagoneer. Inside, the cabin too is all new, with a focus on digital tech. The dashboard is dominated by as many as three digital screens, including a central touchscreen, instrument cluster and a dedicated co-driver unit.

Coming to the engine line-up, the global model is available with a range of petrol, diesel and plug-in hybrid engine options. The India-spec Grand Cherokee is expected to be powered by a 290hp, 3.6-litre petrol V6 as standard, with the 4xe plug-in hybrid variant also likely to become available.

The new Grand Cherokee is only expected to arrive around September this year with prices likely to be in the region of Rs 65 lakh-75 lakh.

Which new Jeep SUV launch are you most looking forward to in India in 2022? Let us know in the comments below.

Kia Carens: A look at its standout features