India-spec MG ZS EV to be revealed in December 2019

The all-electric SUV is expected to come with a 150hp e-motor and a 44.5kWh battery pack. 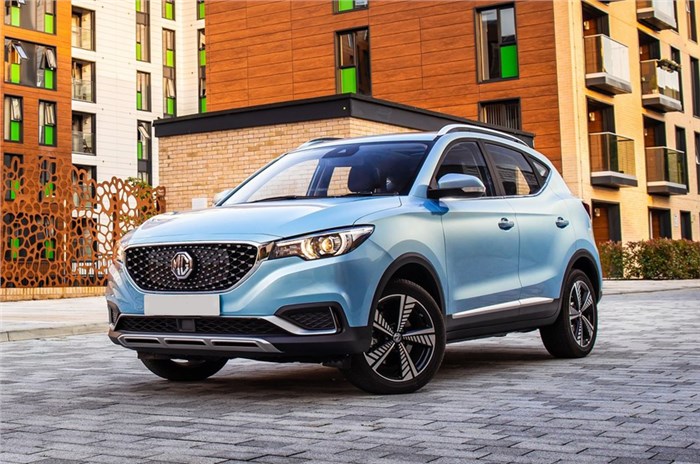 In an official statement, MG Motor has confirmed that the ZS EV for the Indian market will be unveiled in December 2019. The battery electric SUV will be the British automaker's second product for the country after the Hector, which was launched earlier this year. The all-electric vehicle from MG is already sold in international markets like the UK, Thailand and China and is expected to launch in India early in 2020.

In line with its imminent arrival, the ZS EV has been spied testing on Indian soil, with trial production for the SUV having commenced at MG's Halol (Gujarat) plant in June. The automaker will be adopting a CKD (completely knocked down) strategy to keep costs in check.

Coming to the technical specifications, the ZS EV stands at 4,314mm in length, 1,809mm in width and 1,620mm in height, which makes it a shade larger than its closest competitor – the Hyundai Kona Electric. The MG is expected to be equipped with a 150hp electric motor and a 44.5kWh lithium-ion battery pack that yields a range of 262km on the WLTP cycle (335km on the NEDC cycle). Charging times are pegged at 7hrs using a 7kW AC charger and 40mins (from 0-80 percent) using a 50kW fast DC charger.

We've already driven a pre-production model of the ZS EV and you can read the complete review here.

Furthermore, to quench range anxiety issues that electric vehicles are generally plagued with, MG is also working towards ensuring a viable charging infrastructure at select dealerships, in addition to charging alternatives for prospective customers at their homes. The brand has tied-up with eChargeBays, a Delhi-based start-up, to assist its customers with last-mile assistance in setting up EV charging infrastructure at home.

As we have previously reported, when launched, the ZS EV will only be sold in five cities to begin with, including Delhi-NCR, Mumbai, Hyderabad, Bengaluru and Ahmedabad. Expected to be priced in the range of Rs 22 lakh, MG's upcoming model will closely rival the Hyundai Kona Electric that carries a sticker price of Rs 23.71 lakh.