MG’s second car and first electric for India holds plenty of promise. We go to Halol in Gujarat to drive a pre-production car. 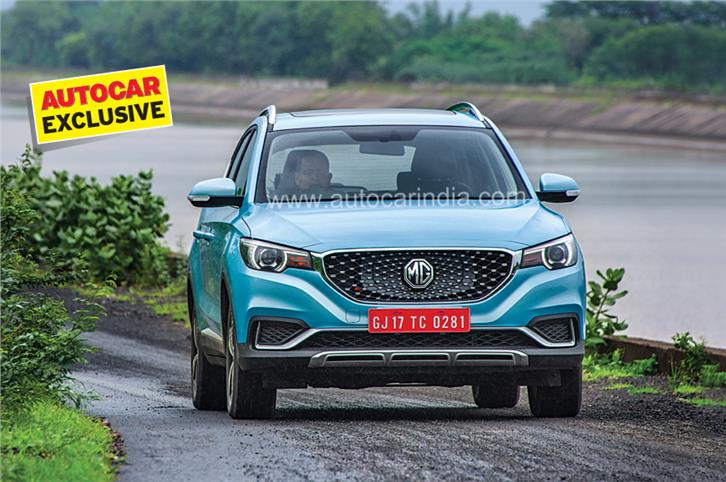 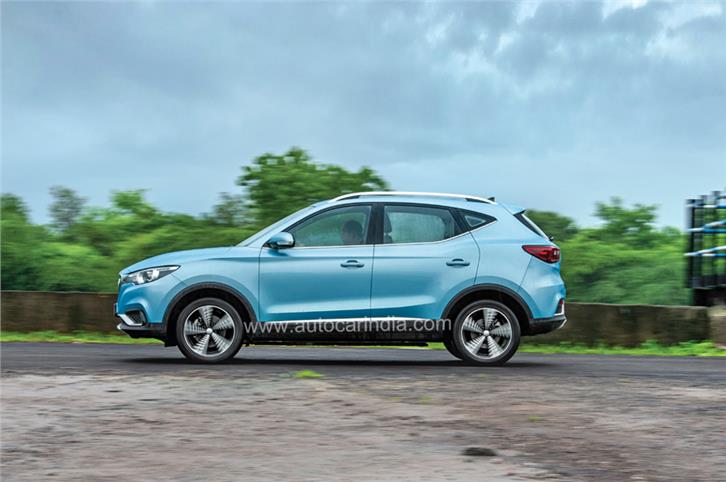 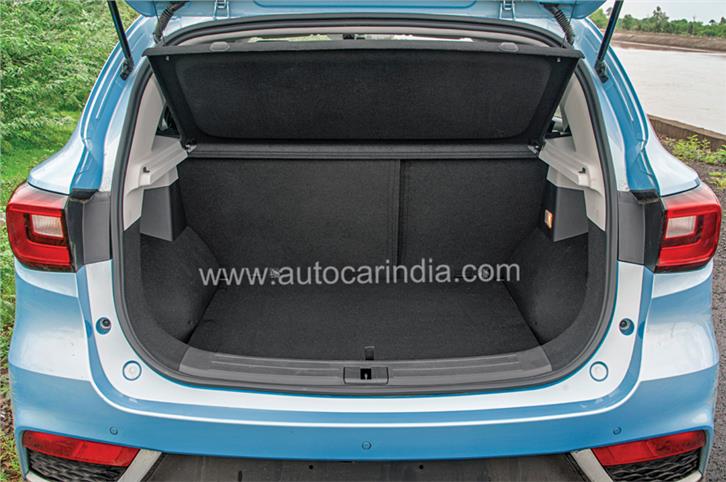 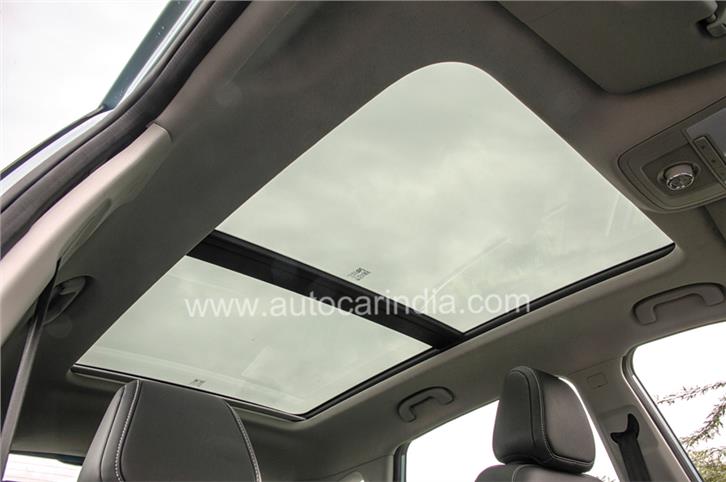 The panoramic sunroof is likely to be a big draw.

It is said electric cars are not well-suited for highway use. On a highway, you are permanently on the throttle, and don’t often get an opportunity to lift off and regenerate electricity. The less you regenerate, the less power you wind back into the battery, and the lesser range you have at hand. What makes it worse is that unlike petrol or diesel cars – which have seven, eight or nine gears – electric cars only use a single reduction gear. No surprise, then that our effective range is slowly, but surely dropping.

None of this, however, currently matters. There still is a healthy 160km of range left and, for the moment, I’m more focused on the long, white minute hand on my watch. We have 40min to get to the airport so, to expedite matters, I have the MG in ‘Sport’ and my right foot is flat on the accelerator.

Luckily, traffic is thin on the Halol-Baroda four-laner, so passing slower-moving traffic is easy. And what’s making this process even easier is the strong hit of torque I get every time I so much as tap the accelerator. The ZS EV’s three-phase permanent-magnet motor makes a strong 350Nm of torque from near-zero rpm; and what makes it so devastatingly effective is that all the torque comes in instantly, like when you hit a switch – snap! 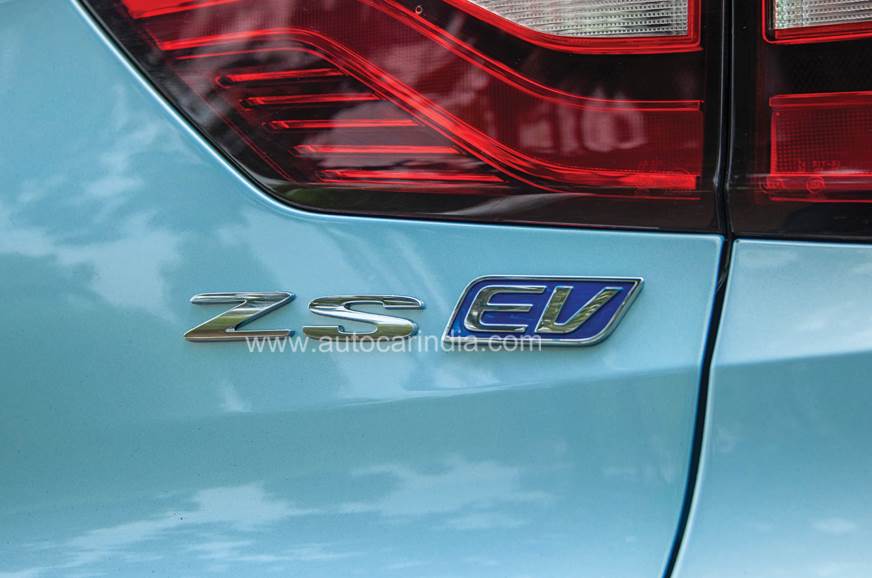 So show the blue snout of the ZS even a hint of a gap, hit the throttle and the MG is almost halfway through before you know it. In comparison, a conventional petrol- or diesel-powered car would still be in the process of dropping a gear, getting to the right rpm and then accelerating forward. That one-and-a-half or two seconds often makes all the difference. What I’m also enjoying is that, in ‘Sport’, the ZS accelerates really energetically even with a light foot on the throttle. At higher speeds, there is some whine from the electric motor up front and I’m not particularly fond of the artificial weighty feel of the steering in ‘Sport’, especially in long and fast corners. That apart, the ZS EV feels stable in a straight line, and all things considered, the brakes deliver a decent pedal feel and a good bite. It’s important to remember that engineers have the difficult job of syncing the regeneration system with the traditional friction or disc brakes. 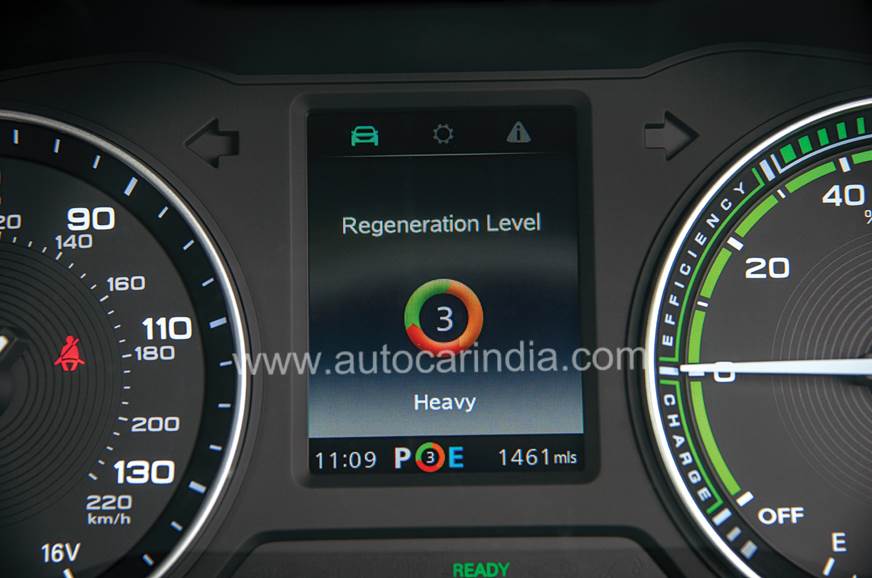 Max regen is not as strong as on other EVs.

Just as we approach the city, my phone pings – the flight is late by a couple of hours. I take the next exit left. The MG engineers tell us there are some nice driving roads ahead. More importantly, there’s plenty of juice in the battery, so we carry on. Before we get to the good stuff, however, we need to cross a small town. Bad roads, crazy traffic, stop-start driving conditions – we must run the gauntlet. 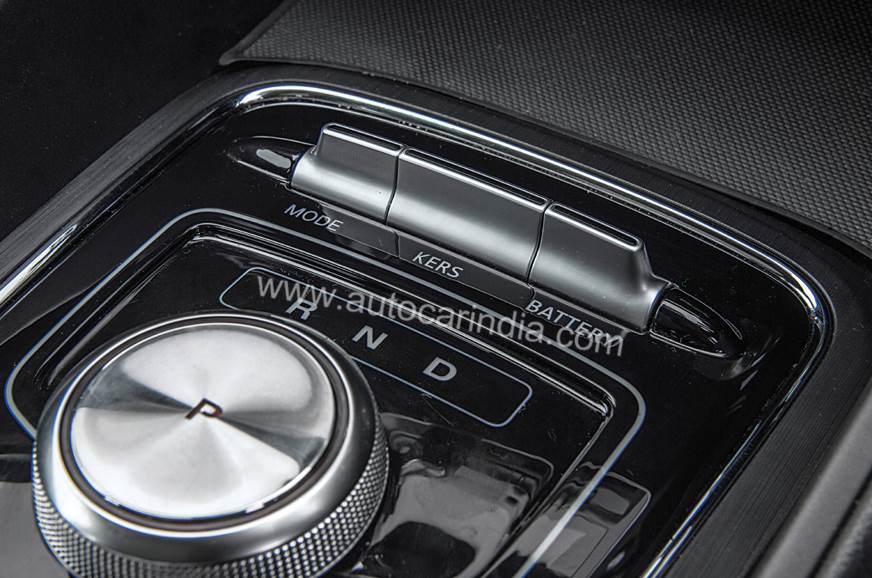 Adjusting the mode and regen is very easy.

I dial back the ZS EV and select ‘Normal’. The lighter steering now clearly feels more natural, the ‘softer’ responses to the accelerator are more suitable here, and what I particularly like is that the ZS now feels a lot more relaxed. The e-motor still feels nice and meaty when you tap the throttle. It is as smooth as ever and that luxury car-like hush, even when it is accelerating, impresses no end. Soon, despite the suicidal bikers, homicidal trucks and dumb-walkers who cross the street with eyes glued to their phones, we get to the other side. I also notice that as we traverse the town, the MG, despite that heavy battery, is actually riding quite comfortably. Now, of the many electric cars we’ve driven recently, most are stiffly sprung to help counter battery weight. But here, MG seems to have found a nice balance between a bit of firmness and a fair amount of compliance. And what adds to the comfort is the is silent and refined suspension. 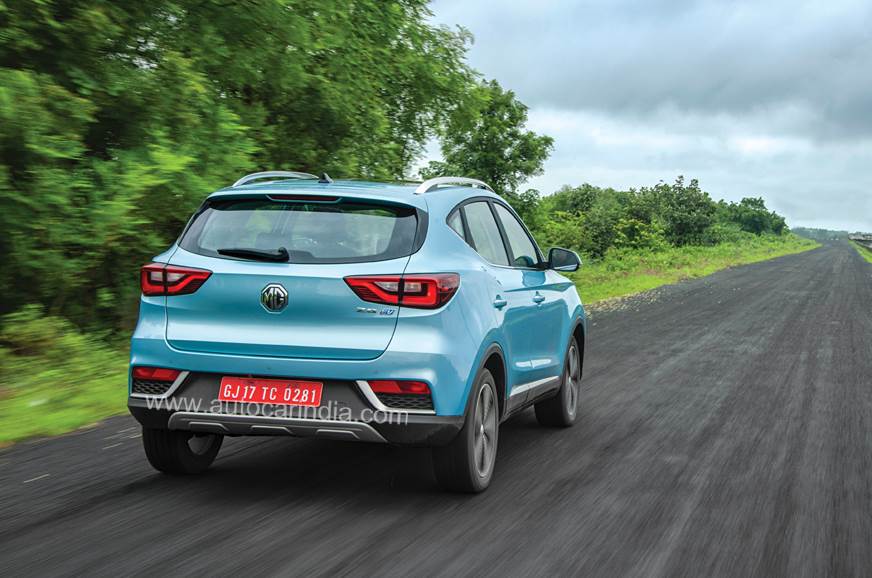 Tap the accelerator in ‘Sport’ and the response is both strong and instant.

As we exit the small town, we come straight onto some low-lying hills and impressive driving roads. On these tighter corners, the body control of the ZS is quite good. It does roll a bit and the lifeless steering is a downer, but as the weight of the battery is placed down low, poise in corners is actually quite nice. Sure, it does feel different from cornering a regular SUV, but once I sort of work out when to push and where to back off, it’s quite an enjoyable experience. Powering out of corners with the instant power delivery is actually quite fun.

“Stop, stop!” yells Paul, from the rear seat. We’ve either run out of 4G signal, or he wants to take a picture. It’s the latter. I park the car for the picture as desired and step out. Must say, the ZS is an SUV that has its share of attractive bits. I like the MG grille with its Mercedes-like converging chrome dots. The chin is nicely executed and the manner in which the tail-lights are perched up on the haunches is cool too. Even when viewed in profile, I like how the belt-line rises and merges with the raked C-pillar. It could have had a more planted stance, and I really would have liked a tighter-fitting roof. But, these niggles apart, it still looks neat. 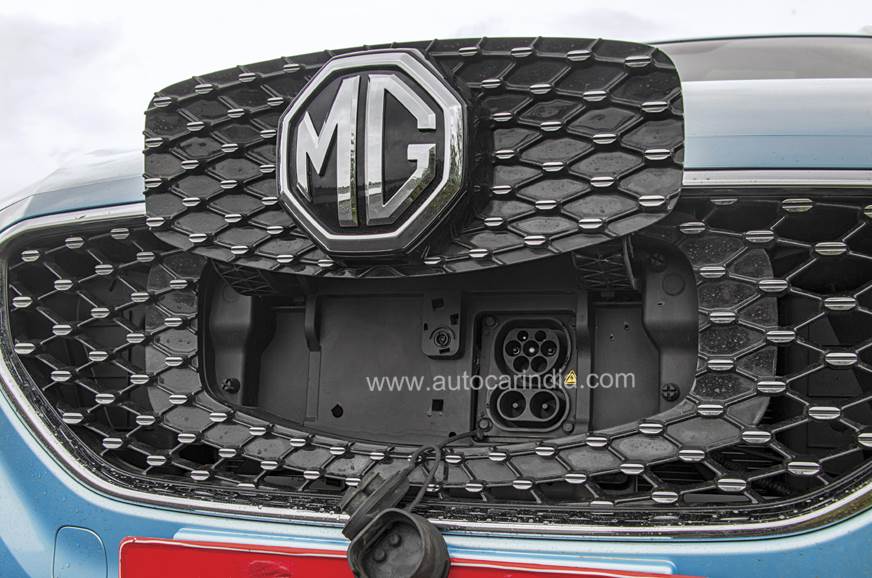 The MG also scores well on the inside. To begin with, the cabin is more spacious than that of its direct rival, the Hyundai Kona. There’s more legroom in the back, the Hector-like panoramic sunroof brightens up the cabin and quality levels in general are more impressive. Up front, the soft-touch materials on the upper section of the dash are superbly executed, the metallic highlights are nicely done and those Audi-like air-con vents, with their rotate-and-click-to-close function, work well. Also adding to the ambience are high-quality bits like the steering, the shuttered central console box, the well-finished door-locks – all parts that seem like they are sourced from partner VW. There are a few not-so-nice bits. The steering wheel doesn’t adjust for reach, and there are a few scratchy and poorly built plastic bits around, but these are few and far between and don’t really impact overall ambience. 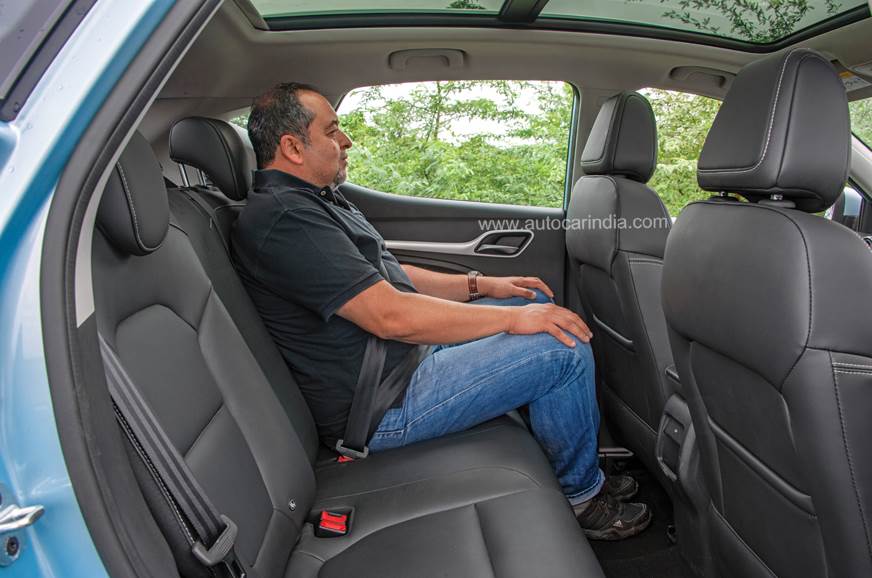 Plenty of legroom but seat is low.

The ZS isn’t just spacious and well built, it’s comfortable too. The front seats are large and offer fine shoulder and upper back support. There’s plenty of legroom for tall drivers and visibility from the driver’s seat is good as well. At the back, you are sat a bit low, but otherwise the rear seat is a comfortable place to travel in; the ZS will make for a good chauffeur-driven car. What you will also find in the back of the ZS is a decent amount of boot space. At 448 litres, we found that it’s good for at least two large bags and a couple of smaller ones, and while the charger does take up a bit of space, this can easily be squeezed in between the gaps in the bags. 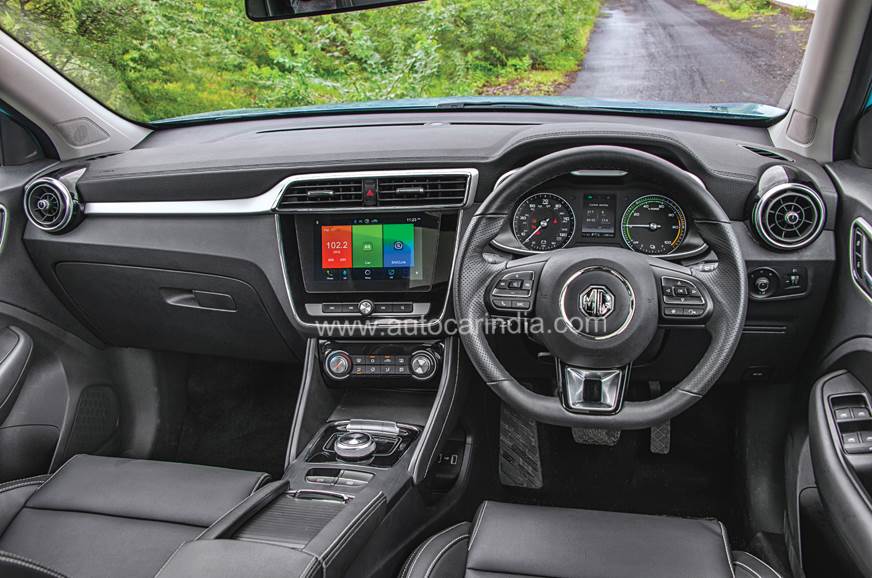 There are a few poorly built plastics and buttons, but in general the fit, finish and material quality are first-rate.

When launched, the ZS EV will come with a 44.5kWh battery and have a New European Driving Cycle (NEDC) range of 335km. That’s more than that of the Kona – which gets a 39.2kWh battery – and this should give it an advantage. Expect a real-world range of around 300km plus. And that should be more than sufficient. It sure will be an interesting test as the MG doesn’t regen as strongly as the Kona. 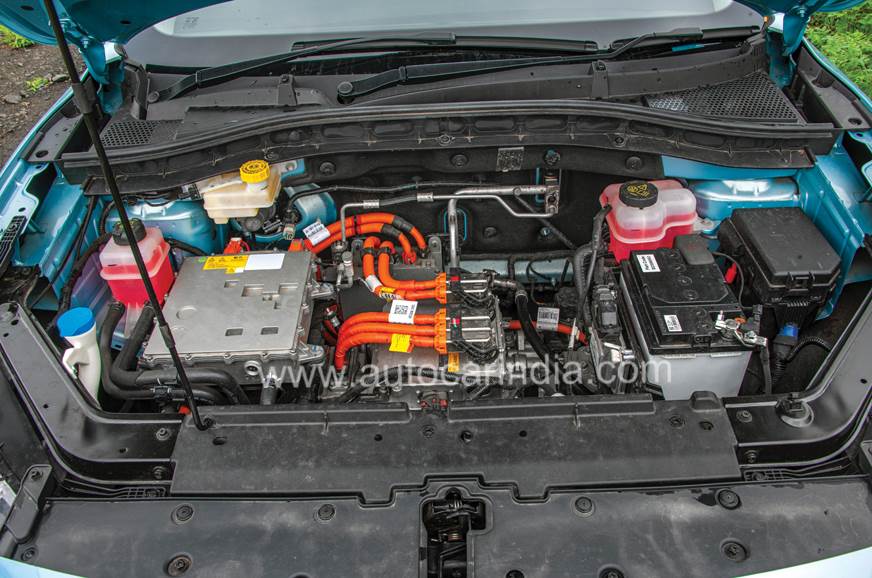 Orange wires are high-tension, do not touch.

MG plans to launch the ZS EV towards the end of the year or early next year. The car sold here eventually is likely to be a mild facelift of this one, and like the Hector, it will loaded with kit too. Expect the same connected features as on the Hector, and MG is likely to price it more aggressively than the Kona too, somewhere around the Rs 22 lakh range. The electric car race is heating up and MG could have another winner on its hands, especially as this one’s better-suited to what Indian customers are likely to want. If you are in the market for an electric car at this price, the ZS EV could be worth the wait. 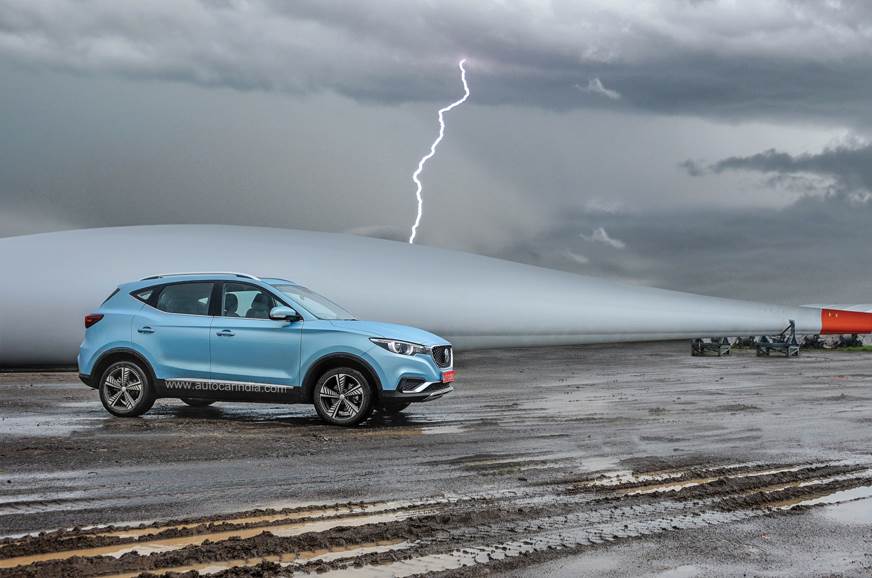