Kia’s premium MPV is expected to be priced at about Rs 30 lakh (ex-showroom) when it arrives; to be available in three seating configurations. 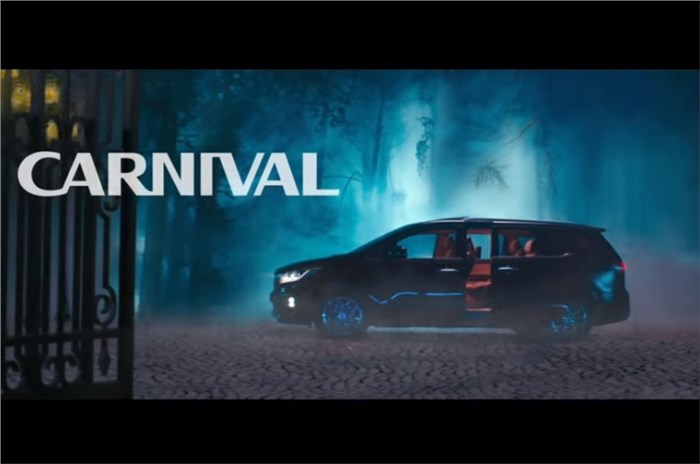 Kia Motors India has released a first teaser for its next product, the Carnival MPV. The India-bound Kia Carnival is already on sale abroad however sources tell us that the model will have India-specific styling and equipment tweaks. Kia will most-likely showcase the model to its Indian dealers sometime next month and will announce pricing thereafter a few days later.  As the Carnival will be brought in as a CKD (completely knocked down) unit and assembled at Kia’s facilities in Anantapur, Andhra Pradesh, expect prices in the region of Rs 30 lakh (ex-showroom).

Expected to be a more premium offering than the current crop of mass-market MPVs – like the Maruti Suzuki Ertiga and Toyota Innova Crysta – the Kia Carnival for India will be available in 7-, 8- and 9-seat configurations. In order to justify its premium positioning, the Carnival will be quite plush on the inside, with captain seats that have extendable leg rests and armrests, a rear-seat entertainment package with 10.1-inch screens, Kia's UVO connectivity suite, a large touchscreen infotainment system, two sunroofs, three-zone climate control, a power adjustable driver's seat with memory function, power sliding rear doors and a bevy of safety tech coming as standard on higher variants.

The Carnival’s size should also help to reinforce its position as an upgrade to mass-market MPVs – measuring 5,115mm in length, 1,985mm in width and 1,740mm in height, and with a wheelbase of 3,060mm, the international-spec model is 380mm longer and 155mm wider than the Innova Crysta.

At launch, we expect Kia to provide a BS6-compliant, 2.2-litre, four-cylinder, turbo-diesel engine producing 202hp and 441Nm of torque. Output will be sent to the front wheels via a 6-speed automatic gearbox, though a 6-speed manual is also on offer in international markets.

Kia’s first foray into the Indian market has been extremely successful – the Seltos has overtaken the previous sales champion of the midsize SUV segment (in terms of monthly sales), the Hyundai Creta, with over 40,500 units having been retailed in four months after its launch. Kia doesn't plan to introduce the Carnival to India to push numbers, but is an effort to establish itself as a premium vehicle manufacturer – it may still shake up the MPV segment by offering a viable upgrade to the Toyota Innova Crysta while not being as pricey as the Mercedes V-class and Toyota Vellfire.