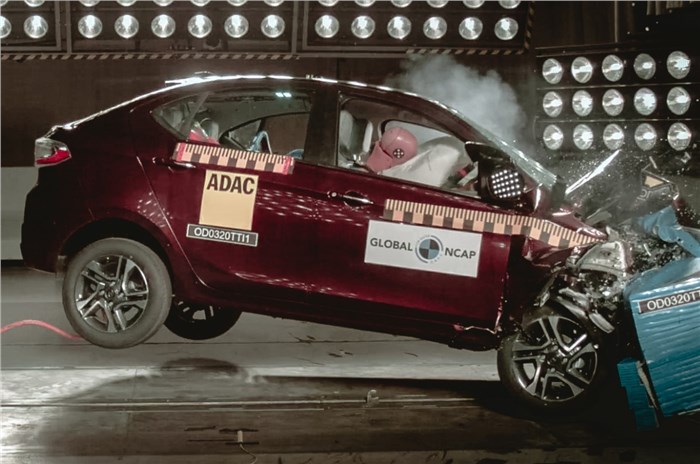 Global NCAP’s crash test results for the Altroz and Nexon, along with rising consumer awareness about safety, have led buyers to cite safety as the biggest draw when buying a Tata car.

When Tata Motors’ turnaround drive for its passenger vehicle (PV) business unit began in 2016 with the Tiago hatchback, design and styling was the key draw for the product. It was a similar case for the models that followed. That was much needed as Tata wanted its cars to be looked at, and attract customers to the showroom. However, of late, safety seems to be the bigger draw.

The evolution of the passenger car market, which is seeing a rising level of awareness about safety, along with the improved performance of Tata cars in Global NCAP’s crash tests are seen as the main factors in safety drawing buyers.

“When we checked with our own customer the reasons to buy, a year back safety came at maybe number two or number three, but today a huge number of our customers put safety as the number one reason why they buy a Tata car,” Vivek Srivatsa, head – marketing, PVBU, Tata Motors Motors, told our sister publication Autocar Professional. He adds that customers cite design and driving pleasure (ride & handling) as the second and third factors that influenced their purchase decision.

In December 2018, the Tata Nexon compact SUV became the first made-in-India model to score a five-star rating for adult occupant safety in a crash test by the global safety watchdog. This was in stark contrast to the zero star rating for the now discontinued Nano small car in January 2014, which was part of Global NCAP’s first-ever independent crash tests of India-made cars. The Nexon facelift, which has been on sale since early this year, has yet to be tested by the safety watchdog.

After the Nexon, the Tata Altroz premium hatchback also scored a five-star crash test rating for adult occupant safety. These models, and their crash test results, are also playing key roles in Tata Motors’ performance in the market, where its share has climbed up from 4.6 percent during April-November 2019, to 7.7 percent during the same period this year, which is the OEM’s highest share since FY2013.

“Combined with the fact that our sales have gone up, you can say that awareness of safety across the industry has gone up, and hence it’s a benefit for Tata Motors. Quite a direct correlation,” says Srivatsa.  Tata Motors was the first OEM in India to set up an in-house crash test facility, in 1997. The investments seem to be yielding good results now.

Tata Motors picked up the theme of safety as part of its campaigns during the pandemic as there was a heightened sensitivity towards safety. “I think it was the right time for us to show the customer that the human life matters, whether it’s through COVID-19 or on the road, human life is very important,” says Srivatsa while highlighting India’s dubious distinction of still topping the list of nations with the highest number of road fatalities. Over 151,000 lost their lives on Indian roads during 2019. The figure incidentally is higher than the number of deaths till date due to COVID-19 in the country.

As Tata Motors looks to return to profitability in its passenger vehicle businesses, it wants to play the safety card in every segment. Along with it, periodical product interventions are being planned with an objective to keep the portfolio fresh in the market.

Production-spec Tata Gravitas to be unveiled on January 26, 2021