Since the Xcent launched back in March 2014, over 1.5 lakh petrol models and over 1 lakh diesel models have been sold. 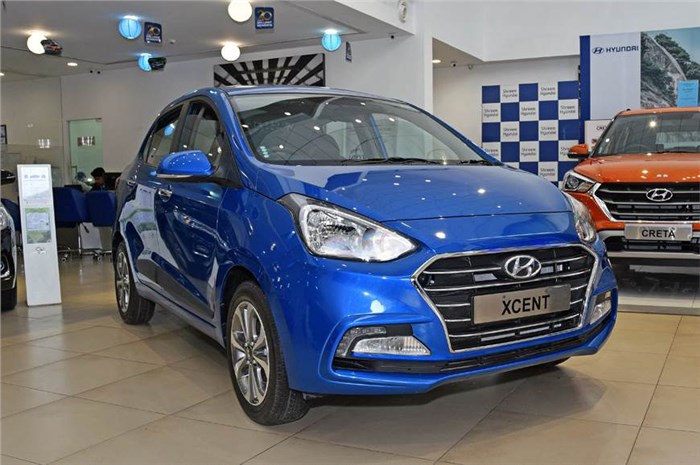 Hyundai Motor India has just chalked up a new sales milestone through its first sub-four-metre sedan – the Xcent. Launched on March 12, 2014, after the India reveal at Auto Expo 2014, the Xcent has crossed the 2,50,000-unit sales milestone in the domestic market.

One may recollect that engineers at Hyundai’s R&D centre in Hyderabad and at Namyang, Korea, worked in collaboration to develop the Xcent right from its concept stage, through to the final product-development stage. The Xcent was squarely aimed at the Maruti Suzuki Dzire and the Honda Amaze, with pricing starting at Rs 4,66,000 (ex-showroom, Delhi) – about Rs 20,000 less than the Dzire and about Rs 30,000 less than the Amaze, at the time. April 2017 saw the Xcent get its first facelift, which in turn saw it get an all-new front end with the new signature Hyundai grille that is both wider and taller than the pre-facelift version.

The Hyundai Xcent – which was also designed to be an export model from India – has seen 1,29,913 units being shipped to overseas markets over five years.

Meanwhile, Hyundai has confirmed that it won’t retain the Xcent name for its all-new compact sedan. This new-gen compact sedan has been named the Hyundai Aura, and is set to be launched in the months ahead. While the Aura is the successor to the Xcent in Hyundai’s product portfolio, the Xcent compact sedan will not be discontinued.

Hyundai will be taking the wraps off the new Aura compact sedan at a world premiere on December 19, 2019. Being a global model, the car will replace the Xcent compact sedan in some markets as well. The Aura is based on the Grand i10 Nios premium hatchback that made its India debut on August 20 this year, and is already on sale in many countries.

Cognisant of the fact that the Xcent is extremely popular with fleet operators in India, Hyundai is expected to offer it in lower-spec trims for commercial-use buyers only. This will ensure that the new Aura compact sedan does not get the tag of a cab.

What this also means is that the Xcent will come with BS6-compliant versions of the current model’s engines. A positive here for the Korean carmaker is that from April 2020, the Maruti Dzire diesel will no longer be available, leaving the diesel compact sedan fleet market wide open for the Xcent.

The current-gen Xcent will continue to be sold as the Xcent Prime in petrol, diesel and CNG guise, aimed mainly at cab and fleet operators and will rival the Maruti Suzuki Tour S that is based on previous-gen Dzire sedan.