Hyundai Venue compact SUV to launch in India next month 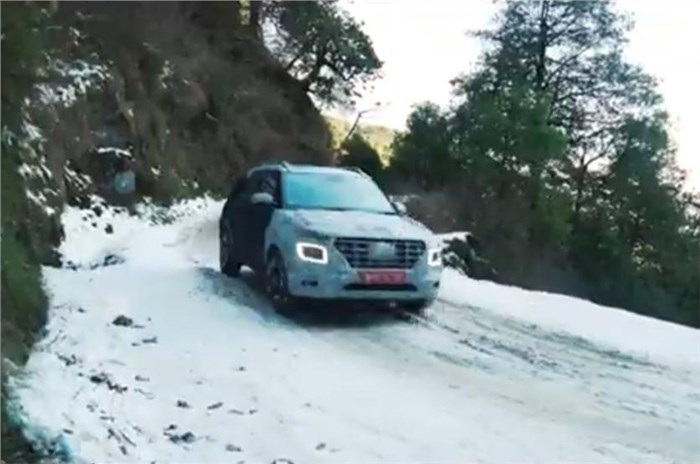 The Hyundai Venue will be showcased for the first time in India and at the New York International Auto Show on April 17, 2019. While there has been no official announcement about the date, we can tell you that dealers have confirmed that the Venue compact SUV will launch in India around mid-May 2019. Hyundai India has also not officially announced when the bookings for the new compact SUV will open, but according to sources, bookings can be made from April 17 via an online portal or through Hyundai dealers across the country.

We recently brought you the first set of pictures of the new Hyundai Venue without any camouflage, which showcased the split front headlight and daytime running light design along with the upright and large front grille. The Venue will also get split five-spoke wheels with Hyundai’s typical two-tone diamond-cut finish and a rear design that is upright with squarish tail-lights. In profile, the Hyundai Venue is typically SUV-esque and sports a very Creta-like design language, something that tends to hugely appeal to Indian audiences.

Under the hood, the Venue compact SUV will get the choice of three engine options. The diesel engine will be a 1.4-litre, four-cylinder, turbocharged unit with 90hp on tap, while the naturally aspirated petrol engine will be a 1.4-litre, four-cylinder engine making 100hp. The Venue will also mark the debut of Hyundai's 1.0-litre turbocharged petrol engine, which will be mated to a 7-speed dual-clutch gearbox. This will make the Venue the only SUV in its segment with a dual-clutch gearbox.

On the inside, the compact SUV will be feature-packed with a large touchscreen offering Apple CarPlay, Android Auto and inbuilt navigation. The top-spec Venue will also get a sunroof.

The Venue will be highly ‘connected’ car with features that will allow owners to track it at all times and to remotely start/stop the climate control. Hyundai’s Blue Link tech will also notify emergency services in case of an accident and send a panic message to registered mobile numbers. Also part of the features list is geo-fencing capabilities, using which owners can monitor the location of their car as well as the speeds it is travelling at.

With competitors like the Maruti Suzuki Vitara Brezza (India’s highest-selling SUV), the new Mahindra XUV300, the popular Ford Ecosport and the Tata Nexon, the Hyundai Venue sure has its work cut out for it. Also, due to its extensive list of features, expect pricing to be higher than that of the Vitara Brezza and the Nexon and closer to that of the Ecosport and the XUV300.