Following the two Hyundai SUVs, Maruti’s Vitara Brezza, along with Kia’s Sonet and Seltos complete the top 5 sales list for the previous month. 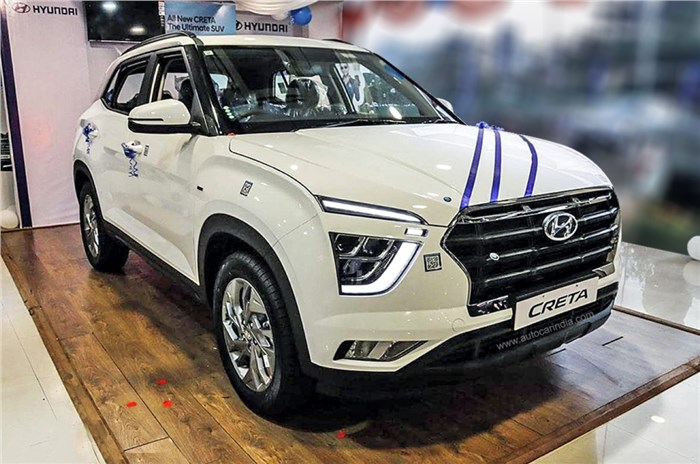 2021 has started off on an exciting note for carmakers in India with the pent-up demand from last year is keeping the momentum going in the new calendar as well. While sales are in the fast lane on account of the increased need for safer personal mobility, a host of new models introduced in the recent past are also the reason for the upbeat mood in the new car market.

As a result, the utility vehicle (UV) segment is one that is witnessing the most action right now, with a series of products such as the Kia Sonet and Hyundai Creta pulling buyers into showrooms, and commanding a significant waiting period despite the perceptible market slowdown.

The list of Top 5 UVs for the month of January show that Hyundai Motor India is right at the top with two of its models – Creta and Venue – registering the maximum sales and also together accounting for over 46 percent of the carmaker’s overall sales volumes of 52,005 units in the month.

While the Creta mid-size SUV went home to 12,284 buyers, the Venue compact SUV recorded sales of 11,779 units last month. The duo has been the key driver of growth for the company in the recent past, with the increasing popularity and demand for UVs gravitating buyers towards these stylish offerings from the Korean manufacturer.

The Hyundai Creta is on a dream run in the Indian market with the SUV receiving over 1,15,000 bookings in six months; it was launched in March last year. The Creta has drawn interest from even mid-size sedan buyers with its plethora of powertrain options, and a vast feature list.

The sub-four-metre Hyundai Venue too follows the same approach of spoiling the customer with its lengthy feature list including a large touchscreen infotainment system, sunroof and wireless phone charging. It also draws buyers towards its rather appealing design language.

The No. 3 SUV in this list is the Maruti Suzuki Vitara Brezza, which has raked in 10,623 units for the country’s largest carmaker. The Maruti’s compact SUV – which, unlike the Venue and Sonet, is offered in petrol-only form – is in the final stages of the product lifecycle of its first generation. The second-gen Vitara Brezza is expected to arrive by the end of this year.

The Brezza contributed heavily to the UV sales growth of Maruti Suzuki India, which recorded overall UV sales of 23,887 units, up 45 percent compared to January 2020’s numbers of 16,460 units.

The fourth and fifth position in the Top 5 UVs’ list is reserved by Kia siblings – Seltos and Sonet – respectively. Kia Motors India registered sales of 9,869 units of the Seltos mid-size SUV and 8,859 units of the Sonet compact SUV.

These two models from Kia are akin to the Creta and Venue from Hyundai, and combined, contributed to 23 percent growth for Kia Motors India last month, with sales growing from 15,450 units to 19,056 units.

The UV space is a big ticket item right now, with a sustained buyer interest towards this body style that especially dominates the sedan style. While the SUV boom in India has meant a collective sales milestone of over 8 million units in the last 15 years, the pace at which UVs are outperforming their sedan and even hatchback rivals in some cases, is set to see even carmakers prioritise their new product development in favour of SUVs for a long time to come. As long as the buyer is happy, carmakers should be happy to oblige with these rather more profitable products.