Based on Chinese Maxus D90, the Gloster is the largest SUV to wear the MG badge; to go on sale in India during the 2020 festive season. 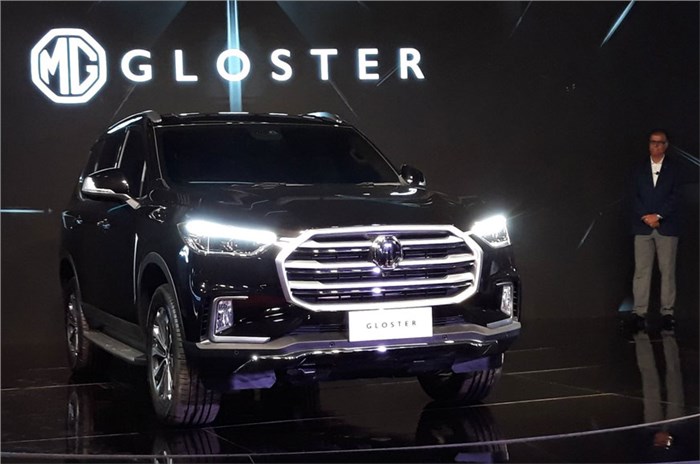 We were the first to tell you about MG India’s plans to bring a full-size SUV based on the Chinese Maxus D90. Now, it has now been revealed at Auto Expo 2020 as the MG Gloster. It is officially the largest SUV to wear an MG badge and will take position as the brand’s range-topper in India when it goes on sale during Diwali this year.

The large SUV will have immediate appeal for the ‘size does matter’ crowd. Measuring over 5m in length, the Gloster is longer than the full-size Toyota Land Cruiser 200. The big and imposing look is shared with the Maxus D90 (Maxus and MG come under the umbrella of SAIC) but MG has tweaked the styling for India. The grille, wheels and chrome highlights have been redone for the MG. The SUV on display had a more angled version of MG's standard grille design lathered with chrome, LED DRLs atop slim headlight units, a large glasshouse and roof rails. The rear has a clean design, with slim tail-lamp units and a wide tailgate, with a large 'Gloster' badge finished in chrome. The 19-inch alloy wheels are shod in 255/55 R19 Continental tyres. The Gloster sits on a light truck ladder-frame chassis.

The large exterior dimensions allow for a large cabin and there’s lots of room in each of the Gloster’s three rows. Also impressive is the quality level, which is easily a few notches above what we’ve seen in the Hector; material quality too is up there with German cars.

In true MG fashion, there will be an overload of features too. While the final spec of the Gloster for India is yet to be announced, the display car’s equipment list was telling. Adaptive LED headlights, LED DRLs, a panoramic sunroof, heated wing mirrors, gesture controlled tailgate, ambient lighting, three-zone automatic air-conditioning, an 8.0-inch multi-information instrument cluster display, conncected car tech and a 12.3-inch touchscreen infotainment system were part of the package. Front seats with heating, ventilation and massage functions can also be expected. MG has promised an extensive list of personalisation options as well.

Versions sold abroad come with a 224hp, 2.0-litre turbo-petrol engine that can be had with a 6-speed manual or a 6-speed automatic gearbox. For India, MG is expected to introduce its own in-house-developed 2.0-litre twin-turbo diesel that delivers 218hp and 480Nm of torque. This engine was first shown at the Guangzhou motor show in China last year and is understood to be derived from Fiat’s Multijet II engine that powers the Hector.

MG will assemble the Gloster in India at its Halol plant in Gujarat, but it is learnt that local content will be limited to a few components only. The Gloster will likely be priced upwards of Rs 45 lakh and could be pitched as an upgrade to the Toyota Fortuner and Ford Endeavour, rather than a direct rival. MG’s shaken up the midsize SUV segment with the Hector and by the look of things the Gloster could have the same impact in the premium SUV space.