Along with the midlife update, Toyota has also ushered in the Legender version of the Fortuner – but how different is it from the standard Fortuner? We break it down for you. 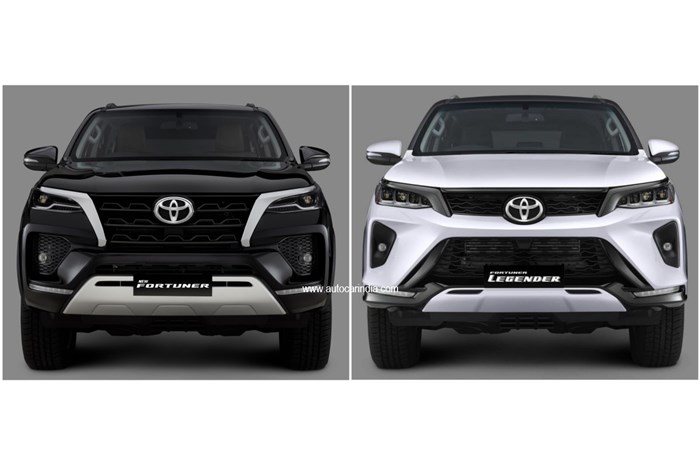 The Toyota Fortuner facelift was the first SUV to be launched in India in 2021. This is the first major update for the second-generation Toyota Fortuner, which was launched in our market well over four years ago. However, this isn’t like most mid-cycle refreshes – in addition to some vital revisions and additions, the 2021 Toyota Fortuner gets a range-topping Legender variant.

Fans of Toyota’s wildly popular SUV have pined for the India launch of the Toyota Fortuner Legender since it made its international debut last year, and the Legender – which looks decidedly sportier than the standard model –has finally arrived. But what exactly sets the standard Fortuner and the Legender apart? Read on to know.

The most obvious differences between the standard Toyota Fortuner and the Legender are in their appearances. The standard model looks noticeably different from the outgoing Fortuner with its new grille, redesigned LED headlights and front bumper, new 18-inch wheels and slimmer LED tail-lights. However, the Legender being the range-topping Fortuner, goes beyond minor changes, and gets an entirely new face that lends it a more dynamic look, with a split grille and a unique design for the LED headlights and DRLs. It also gets sequential turn indicators, a restyled rear bumper and dual-tone 18-inch alloy wheels.

One key difference between the Fortuner and the Legender is in their colour schemes. The standard Fortuner can be had in eight different paint shades, but there are no dual-tone schemes on offer. The Fortuner Legender, meanwhile, does get a dual-tone paint scheme – Pearl White with a black roof – but that is the only colour combo available on the most expensive Fortuner there is.

The facelift for the Toyota Fortuner hasn’t introduced any radical changes to the SUV’s interior, but it does get a larger, 8.0-inch touchscreen infotainment system with connected car tech, as well as Apple CarPlay and Android Auto compatibility. Chief differences between the standard Fortuner and Legender are in the colour schemes and features. The standard Fortuner can be had with an all-black or chamois interior, while the only colour scheme for the Fortuner Legender is black-and-maroon with contrast stitching in maroon.

On the features front, the Toyota Fortuner Legender distinguishes itself with additions such as black dials for the instrument cluster (blue on the standard Fortuner), a rear USB charging port, wireless smartphone charging, ambient lighting, an auto-dimming interior rear-view mirror and hands-free tail-gate opening. That said, it has to make do with a 6-speaker audio system, unlike the 4x4 versions, which get an 11-speaker JBL audio system.

Another major difference between the standard Fortuner and the Legender lies in their powertrain options. Toyota India chose to carry over the 2.7-litre petrol engine unchanged, which makes 166hp and 245Nm of torque, and is available with a 5-speed manual or 6-speed automatic gearbox. The updated 2.8-litre diesel engine now puts out 204hp – up from 177hp – and while it makes the same 420Nm when paired with the 6-speed manual, it produces an impressive 500Nm when mated to the 6-speed torque convertor automatic.

While the standard Fortuner can be had with either engine (and with a choice of two- and four-wheel drive versions), the Legender doesn’t offer much in the way of choice, as it is available only in two-wheel-drive form, and with the 2.8-litre diesel engine paired with the 6-speed automatic.

At this price, not only is the Legender about Rs 15,000 more expensive than the fully-loaded 4x4 diesel-auto version, but a massive Rs 2.74 lakh pricier than the 4x2 diesel-auto version of the standard Fortuner. Toyota has avoided offering the Legender with a four-wheel-drive setup, as doing so would have pushed its price closer to the Rs 40 lakh mark. It remains to be seen how buyers take to the Legender, which certainly attracts attention, but also demands a substantial amount of money.

Do you think the Toyota Fortuner Legender justifies the premium it commands over the standard Fortuner? Let us know in the comments.

Next-gen Fortuner likely to debut by 2022