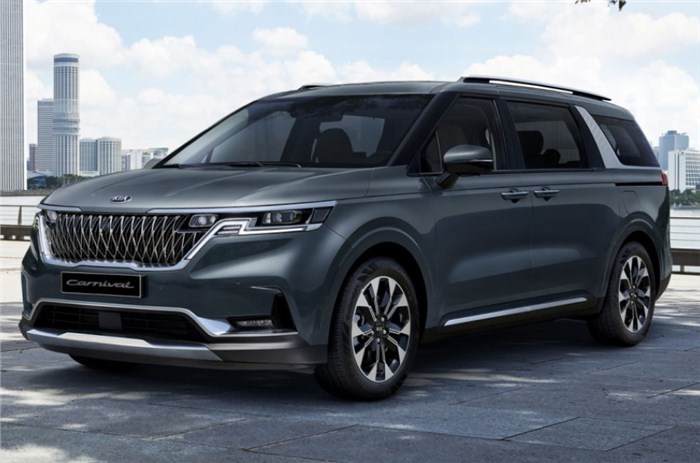 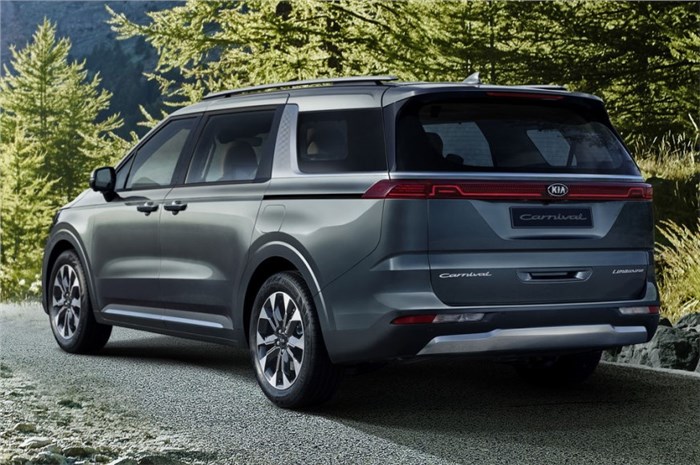 The world caught a glimpse of it in a teaser sketch released just a few days ago, and today, we have first pictures of the all-new 2021 Kia Carnival, which reveal the exterior design of the MPV in full.

How different is the 2021 Kia Carnival on the outside?

One look at the pictures is enough to tell Kia wants the Carnival to have even more road presence than before, and the design and styling derive influence from Kia’s range of SUVs. Gone are the rounded, soft lines of the current-gen MPV, and in their place come more angular lines and a squared-off stance. Grabbing attention up front is the arrival of Kia’s signature ‘Tiger Nose’ grille, which features a diamond pattern embellished with chrome, and its corners house the high beam headlight cluster, with the low beam clusters in narrow housings flanking the grille, accentuated by LED daytime running lights which wrap around the turn indicators. There’s a chrome finish for the lower air intake, and a faux skid plate completes the SUV-inspired look up front.

Kia says it has shortened the new Carnival’s front overhang, and pushed the A-pillar back to make for a longer bonnet for the all-new MPV, which it dubs a ‘Grand Utility Vehicle’. The Limousine variant in the pictures rides on 19-inch dual-tone alloy wheels, and other notable design elements along the side include a prominent character line that runs the length of the MPV, linking the head- and tail-lights, a chrome fin for the C-pillar and the A- and B- and D-pillars finished in black, creating what Kia calls an ‘island roof’. At the back, the new Carnival sports LED tail-lights linked by a large LED light bar, a chrome strip that merges into the base of the chrome fin on the C-pillar and a faux skid plate.

Will the new Kia Carnival will be larger than its predecessor?

At this time, Kia hasn’t revealed the specifications for the fourth-gen Carnival, but has said the new MPV will have a longer wheelbase than the current-gen Carnival, and will have more space on the inside as well.

What about the new Kia Carnival’s interior?

Pictures released today only provide a clear look at the exterior of the new Carnival, but spy pictures have previously revealed it will have a completely new dashboard, equipped with two screens – one for the digital instrument cluster, and another for the infotainment system. The Carnival will also retain its dual-sunroof setup, and is expected to be offered in multiple seating configurations as before – from as many as 11 seats (for variants aimed at the fleet market) to a sumptuously-appointed four-seat version (with powered captain seats featuring ventilation) for those looking for a more luxurious offering.

What about the new Kia Carnival’s engine options?

Kia will only reveal the engine options for the new Carnival in the coming weeks. Expect it to carry over the 2.2-litre diesel for select markets. For regions which prefer petrols, the new Carnival is expected to get the same 280hp, 2.5-litre turbo-petrol that powers the new Kia Sorento, along with a hybrid option, which will pair a 1.6-litre petrol engine with an electric motor.

When will the new Kia Carnival come to India?

At this point, some of you may be wondering “Didn’t Kia just launch the Carnival in India?”, and the answer to that is yes, the Carnival was only launched at the Auto Expo in February this year. However, the third-gen MPV currently on sale in India debuted globally all the way back in 2014, and is due to be replaced, with Korea set to get it first in the coming months. If you’re in India, however, don’t hold your breath for its launch, because the new Carnival is only expected to come to India by 2022.

What do you think of the new Kia Carnival’s design? Let us know in the comments.