Poised to sit at the top of the Elantra range, the first-ever Hyundai Elantra N is expected to come with a 275hp, 2.0-litre turbo-petrol engine. 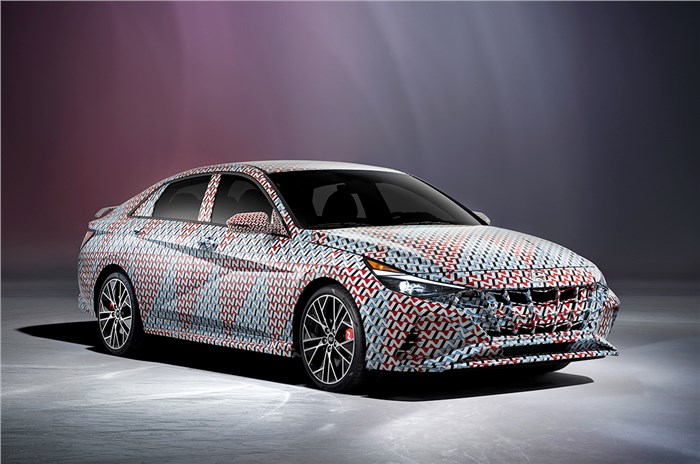 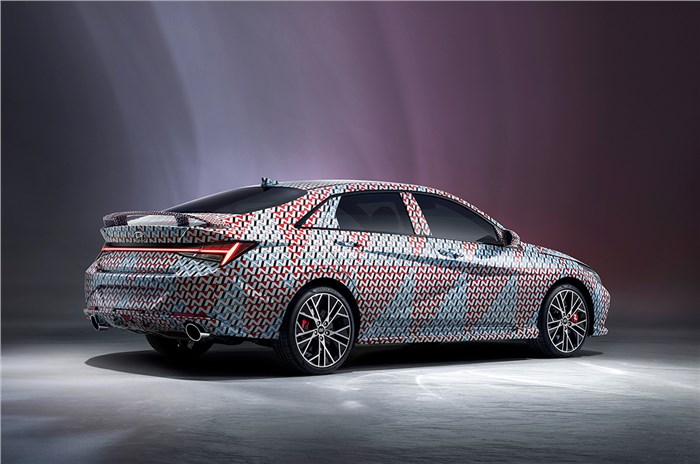 The 2021 Hyundai Elantra N has been previewed in official pictures, ahead of its world premiere in the coming months. This is the first time Hyundai has confirmed it’s working on a full-blown N version of the new-generation Elantra, which will also be the first iteration of Hyundai’s executive sedan to have a full-fledged performance version. Do note, the Elantra N will sit at the top of the Elantra range, above the Elantra N Line that was revealed a few months ago.

While the pictures have a fully-camouflaged example of the Hyundai Elantra N, they give away quite a few details. The wedge-like stance and edgy, razor-sharp styling of the new-generation Elantra mean Hyundai didn’t have to make radical changes even for the full-blown N model.

The Elantra N sports a tweaked front bumper with larger air intakes, a gloss black finish for the window line, a large rear spoiler, twin exhaust tips and a rear diffuser. The Elantra N will run on Pirelli PZero tyres with bigger, 19-inch diamond-cut alloy wheels, and it also appears to have larger disc brakes with red N brake calipers.

The aspect central to the Hyundai Elantra N will be its engine. Hyundai is expected to plonk the same 2.0-litre, four-cylinder turbo-petrol in the Elantra N as found in the Veloster N hatchback, which makes 275hp and over 350Nm of torque. These figures are a substantial jump over the Elantra N Line’s outputs, and the Elantra N will likely have a sub-6sec 0-100kph time and a top speed of at least 250kph.

Gearbox choices for the Elantra N are likely to include a 6-speed manual and an 8-speed dual-clutch automatic with paddleshifters and a rev-matching function. Launch control is expected to feature, as is a limited-slip differential, and Hyundai could also provide its ‘N Grin Control’ drive modes on the Elantra N. The Elantra N is also set to have retuned suspension for sharper handling.

The Hyundai Elantra N is set to make its debut in the USA in the coming months and will be one of seven models in the Hyundai N range by 2022. Hyundai has confirmed it is working on an N Line version of the new-generation Tucson, and a presentation slide features two covered models. Their silhouettes suggested that both are SUVs, and one of them will be a full-blown N model, while the other will be an N Line offering.

Will the Hyundai Elantra N come to India?

Hyundai has previously contemplated bringing its performance-oriented N brand to India but hasn’t gone through with it yet. The new Elantra is unlikely to come to India anytime soon, with the mid-life update for the current-gen car having arrived only late last year. That said, Hyundai did launch the current-gen car in India just 16 months after bringing in the facelift for the outgoing model.

And in what are encouraging signs for enthusiasts, Hyundai India has introduced a turbo-petrol engine option for most of its models, including the Grand i10 Nios, Aura, Venue, Verna and Creta, and most recently, with the all-new i20. The Elantra N will rival the new Skoda Octavia RS, and it will be interesting to see if Hyundai chooses to follow in Skoda’s footsteps and bring in a handful of units of the Elantra N as CBUs for those willing to pick it over an Octavia RS.

Think the Elantra N could be the ideal halo model for Hyundai in India? Let us know in the comments.