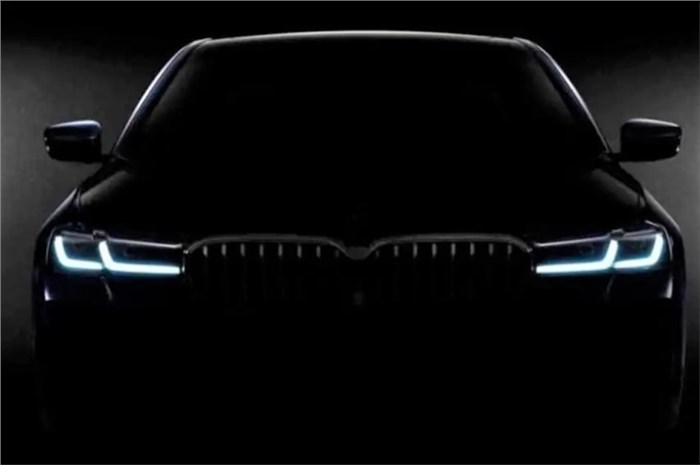 Ahead of its official unveil, BMW has released a teaser image of the upcoming 5 Series facelift. The updated sedan is set to debut in the coming weeks, featuring a tweaked exterior design and a new plug-in hybrid powertrain option.

While the teaser image doesn’t reveal much, it is clear that the facelift gets new, slimmer headlamps with L-shaped LED DRLs and a larger iteration of BMW’s kidney grille, which is now conjoined. Other exterior updates are likely to include tweaked LED tail-lights, new bumpers and new designs for the alloy wheels.

Inside, the 5 Series facelift is expected to get only minor updates. However, a major feature addition will be the inclusion of wireless Android Auto compatibility with the infotainment system. The current model only gets Apple CarPlay connectivity.

With the facelift, the 5 Series is expected to gain another electrified variant in the form of the 545e plug-in hybrid, aside from the 530e that debuted in Europe last year. The 545e is rumoured to be powered by an inline-six engine, along with an electric motor, delivering nearly 400hp. However, it remains to be seen whether we get this powertrain option in India.

Currently, the BMW 5 Series range in India is priced from Rs 55.40 lakh to Rs 68.40 lakh (ex-showroom, pan-India). While there is no official timeline, expect BMW to launch the 5 Series facelift in India soon after its introduction in international markets. In terms of rivals, the 5 Series competes with the Mercedes-Benz E-class, Jaguar XF and the Audi A6.