Honda has packed the fifth-gen City with some segment leading kit, but is it enough to fend off competition? 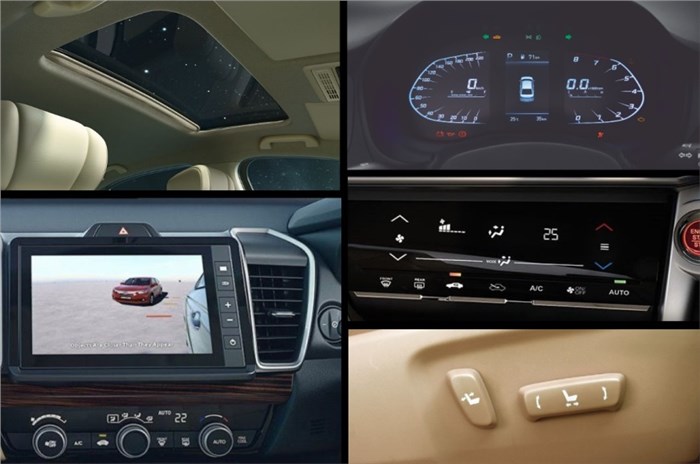 Honda Car India has just introduced what is arguably its biggest launch of the year – the new Honda City. The fifth-gen midsize sedan is entering a segment that has seen a lot of new arrivals in the recent past, one where high tech features and gizmos are a big draw for buyers.

While we’ve already taken a look at how the new City fares in the dimensions, engines and fuel-efficiency departments, let’s now find out just how well kitted Honda’s latest offering really is.

2020 Honda City: What safety features does it get?

Honda says that the upcoming City is underpinned by a “newly designed platform” with increased use of ultra-high tensile steel for better rigidity and collision safety. Though the India-spec model is yet to be tested by safety watchdog Global NCAP, the latest Thai-spec City recently scored a maximum 5-star ASEAN NCAP rating.

In addition to the mandatory ABS, the upcoming Honda gets features like electronic safety program (ESP), auto wipers, auto dimming rear view mirror and tyre pressure monitor, few of which are missing on some of its competitors.

The latest City does get bested by the Verna (Turbo) and Yaris, which additionally offer front parking sensors, and the Toyota even packs in an extra airbag. However, the Honda makes up for it by offering the LaneWatch camera system from the Civic that essentially projects a video feed onto the touchscreen to help avoid blind spots on the left side of the vehicle.

2020 Honda City: What creature comforts does it offer?

All midsize sedans pack in a fair amount of kit including LED DRLs, an automatic air conditioner, cruise control and leatherette upholstery. However, the new Honda and facelifted Hyundai come off as the best-equipped models of the lot.

The fifth-gen City boasts of full-LED headlamps, keyless entry and start, paddleshifters, a sunroof and a rear sunshade. The only other contender which packs in all of the kit is the Verna, though it manages to edge past in the features department with ventilated front seats and a wireless smartphone charger. Notably, even the Yaris holds some novelty by packing in a powered driver’s seat.

The new City, Verna and Rapid sport the largest (8.0-inch) touchscreens in the class, though the Skoda, along with the Toyota, gives Apple CarPlay and Android Auto a miss. Both Honda and Hyundai bundle in their connected car technologies, with the former scoring additional points for offering integration with Amazon’s Alexa voice assistant.

The Verna is the only sedan to get completely digital dials. The City comes close with a sizeable 7.0-inch display in the instrument cluster that not only reads out the regular trip related details, but also doubles up as a G-force meter.

The City has always been on the pricier side of the mid-size sedan segment and the fifth-gen model continues this trend. In fact, new City prices start even higher than the fourth-gen model’s price, which was already the most expensive model in the segment. However, when you get to higher petrol variants, the old and new versions of the City are quite closely priced to one another, and closely matched with the likes of the Yaris, Vento and Verna. The Maruti Ciaz, however, still remains considerably less expensive, but then it isn’t as well equipped either.

New Honda City diesel prices are significantly undercut by the only other midsize sedan with a diesel engine – the Hyundai Verna. On top of that, the Verna has the advantage of a diesel-automatic option too.

While it’s interesting that Honda has chosen to sell the fourth and fifth-generation models of the City simultaneously, with pricing that’s so close, it will be interesting to see if buyers gravitate to the old model or the new one. And with so many capable rivals – most of them recently updated – the new Honda City has its work cut out.