High-tech twin-cam petrol unit is expected to be the engine of choice for the bulk of City buyers. 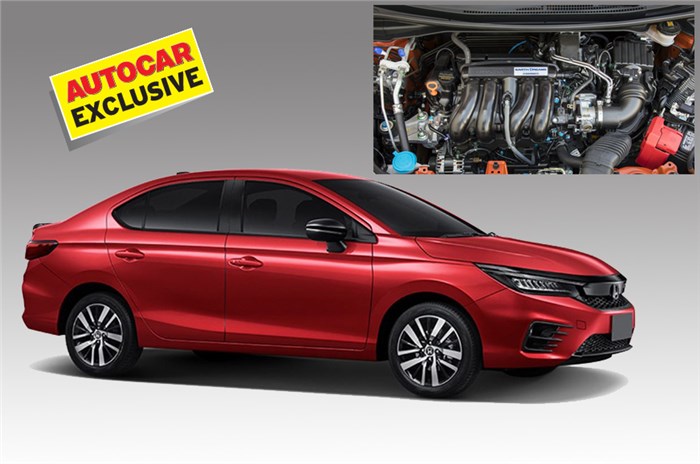 The much awaited all-new City is expected to go on sale once the lockdown is partially lifted and showrooms are open for business. The fifth-generation of Honda’s popular sedan will be offered with both petrol and diesel engines, as before.

While the 100hp, 1.5-litre diesel unit will be carried over all but unchanged from the current car, except for the mandatory upgrade to make it BS6-compliant, the petrol engine is all-new. No, the Indian market won’t get the 122hp, 1.0-litre turbo-petrol available in Thailand-spec City but instead, will have a new 1.5 naturally-aspirated engine with a similar cubic capacity to the outgoing unit. In fact, displacing 1,498cc, the new engine is just one cubic centimetre larger than the previous engine (1,497cc) but that’s where the similarities end.

The new engine (code: L15B) gets a completely new architecture and more sophisticated hardware and electronics that allow it to deliver a broader spread of power, but without sacrificing Honda's famed top-end performance.

The big news is that the new engine will employ a twin-cam or Double Overhead Camshaft (DOHC) valve gear, which is a first for the City. Honda's single cam 1.5-litre engine has been one of the highlights of the City, right from the days of the four-valve-per-cylinder ‘Hyper-16’ 1.5 engine in the original City that had launched in 1998. Honda has since stuck with a single overhead camshaft layout right up to the current City’s engine (code: L15A).

Honda’s decision to move to the more complex (and expensive) DOHC arrangement was prompted by the move to stricter emission standards. A twin-cam layout gives better control over valve timing and valve lift and this makes it easier to meet the more stringent BS6 emission norms without sacrificing performance and economy.

However, on paper the L15B doesn’t show a big jump in power. The new engine is believed to develop 121hp - a mere 2hp increase over the earlier engine. But, Honda sources say that the improvement is not in the power output but the way the engine delivers its power and torque, which is believed to be more concentrated in the lower and middle reaches of the powerband.

An earlier build-up of power is actually just what the doctor ordered for the City. Response at low revs and, more importantly, pulling power have traditionally been a bit of a weak area for the City but now with the new twin-cam engine, Honda will have greater flexibility when it comes to valve timing, valve overlap to develop a more potent slug of torque. While we don't have the final figures yet, torque is also expected to be higher at around 150Nm, versus 145Nm for the current 1.5 engine.

In some international markets, Honda's L15B engine (which powers the Jazz, Fit and even the City) also includes Variable Timing Control (VTC). Also known as cam phasing, VTC helps the engine breathe better at low as well as high engine speeds. In fact the VTC and i-VTEC systems work seamlessly together - the latter employing a milder cam profile at low revs and a more aggressive one at higher revs. However, it’s not clear if the Indian City will come with VTC as well.

The L15B’s four-valve head has larger intake and exhaust valves for better breathing and the ability to run a higher compression ratio. In international markets the L15B runs a lofty 11.5:1 compression ratio but this may be lowered for the Indian City which will have to run on low 91-octane fuel.

The L15B’s crankshaft is now around 25 percent lighter and the lower mass has improved the engine’s throttle response. While the bore and stroke of the pistons are near-identical, the new pistons get uprated oil jets for enhanced cooling and aluminium sleeves that sit over the normal cylinder sleeve for better heat transfer.

The City’s new L15B engine may not quite have the 173Nm of torque that the 1.0-litre turbo engine gets in Thailand but it hasn’t sacrificed that zingy, high-revving performance that has defined the City over the years. And with this new engine, pulling power should be enhanced to give you the best of both worlds. All-in-all, Honda’s new City is a lot to look forward to.