We find out how the upcoming Honda City stacks up against the Maruti Ciaz, Hyundai Verna and other midsize sedan contenders. 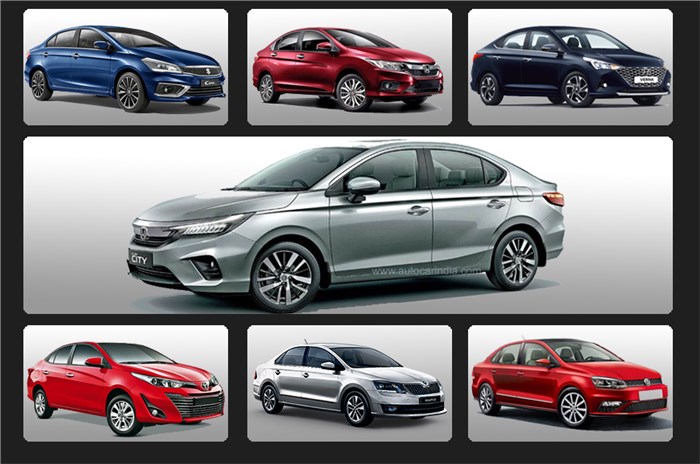 Honda recently revealed key details of the new City that is set to be launched next month. The fifth-generation model promises to be a marked improvement over its predecessor in terms of space, comfort, technology and performance. So how does it fare against its closest rivals, at least on paper? We find out.

2020 Honda City dimensions: Just how big is it?

The new City stretches the tape at 4,549mm in length, 1,748mm in width and 1,489mm in height, making it 109mm longer and 53mm wider, albeit 6mm lower, than the current model. The wheelbase remains unchanged at 2,600mm. And in what will be a first for the company, both generations of the City will be sold simultaneously.

Honda’s latest midsize sedan will be the longest and widest model in its class, with the Maruti coming in second. The Ciaz, however, manages to edge past with a 50mm longer wheelbase. Nonetheless, the City, which is already known for its spacious cabin, will not disappoint on this front.

At 506 litres, the upcoming City’s boot space sees a marginal reduction in capacity and gets bested only by the Ciaz. All models in contention sport 16-inch alloys, except the Yaris which runs on 15-inchers.

2020 Honda City petrol: The most powerful car in the class

# To be launched in coming weeks

As we have already reported, the fifth-gen City gets an all-new petrol engine. It's a 1.5-litre, dual-cam, naturally aspirated motor (codename:L15B) that pushes out 121hp (a bump of 2hp compared to the previous model) and 145Nm of torque. Manual transmission gets an extra gear ratio and is now a 6-speed 'box, while Honda says that the 7-step CVT auto is a new unit as well.

The uptick in power makes the new City the most powerful offering in its class. It even has the highest torque figure amongst its naturally aspirated rivals. However, the 1.0-litre forced induction units of the Verna, Rapid and Vento, unsurprisingly, take the lead when it comes to overall torque figures.

The Ciaz notwithstanding, the fuel economy of the soon-to-be launched City is par for the course for non-turbocharged powertrains.

With most players having exited the diesel market, your choice of diesel sedans is restricted to the new Honda City and the updated Hyundai Verna. The new City uses a BS6-compliant version of Honda’s proven 1.5-litre diesel engine, though output remains unchanged at 100hp and 200Nm.

The 1.5-litre diesel engine on the Verna is new too, and one-ups the City’s unit with higher outputs of 115hp and 250Nm. 6-speed manual gearboxes are standard on both diesel sedans, and you can expect superb fuel economy from both. The Verna is the only one to be offered with an automatic transmission option - a 6-speed torque converter unit. Sadly, Honda won’t offer a diesel-CVT combo on the new City.

2020 Honda City price: Will it be expensive?

Honda has confirmed that the new City will be launched in our market next month. Positioned higher up in the Japanese automaker’s portfolio, expect it to carry a premium over the current model and be priced in the range of Rs 10.50-15 lakh*. Whether the existing City sees a price rationalisation is something to watch out for. Nonetheless, you can expect Honda’s latest midsize sedan to be priced at the higher end of the segment.

Which of these sedans’ specs are you most impressed by? Let us know in the comments section below.