We pit the Hyundai Santro against its competition in the budget hatchback segment - the Maruti Suzuki Celerio and Tata Tiago - on paper. 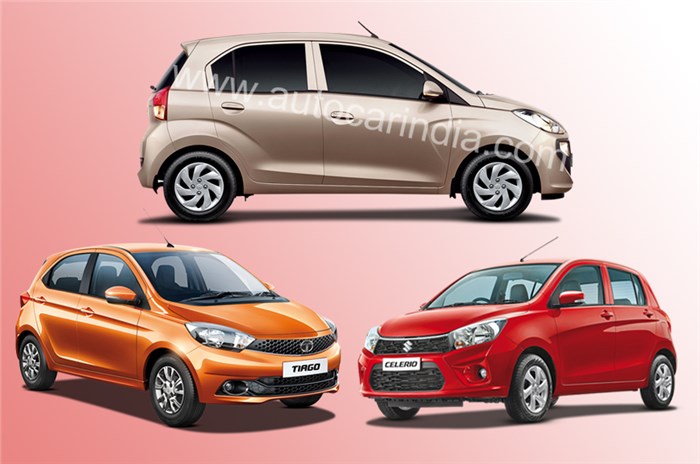 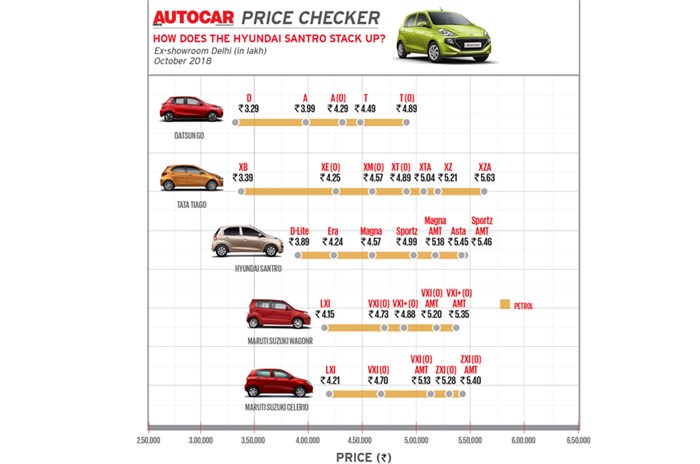 Hyundai has finally brought out the much-awaited the new Santro, priced from Rs 3.89 lakh. The new hatchback revives the Santro nameplate for the Korean brand twenty years after the launch of the original model. While that model rivalled the Tata Indica, Daewoo Matiz and Maruti Suzuki’s WagonR, the new Hyundai Santro faces off against the likes of the Maruti Suzuki Celerio and the Tata Tiago. We compare the new Hyundai against its competition.

While it may not look like it in silhouette, the new Santro is definitely a tall-boy. Compared to its rivals, it is slightly shorter in length, yet its width and height are among the highest. The Santro’s wheelbase is at par for the course, although the Celerio has the longest wheelbase here. These figures mean that the Santro should excel in terms of headroom and shoulder room. Tyre sizes on the Santro aren’t class-leading either, with the Tata Tiago taking the lead in that department.

Hyundai has endowed the new Santro with an updated version of the 1.1-litre Epsilon engine, which means it makes more power and torque than the motor used on the previous Santro. This also means that the numbers see the Hyundai hatchback fall right in the middle of its rivals – with the Celerio falling slightly short with its three-cylinder 1.0-litre petrol engine and the Tiago taking it up a notch with its larger 1.2-litre petrol engine.

However, the Tiago is the only one here that still has a diesel engine on offer, which makes it unique in this segment. In contrast, both the Maruti and the Hyundai have the option of a factory-fitted CNG kit which understandably brings down output figures by about 10 percent. The Celerio was available with a diesel a few years ago, though this variant has now been discontinued.

All three cars have a 5-speed manual and a 5-speed AMT gearbox on offer, though the Tiago diesel doesn’t get the option of an automatic transmission.

On paper, it is the Tiago that is the most fuel efficient car, while the Santro falls short in this area, probably due to its thirstier four-pot engine that burns more fuel than its competitions three-cylinder units.

The Santro is typically Hyundai in terms of features. The carmaker has added a few segment-first features such as a 7.0-inch touchscreen infotainment system with Android Auto and Apple CarPlay compatibility, a reverse camera and rear AC vents. Comparatively, the Celerio gets the shortest equipment list and the Tiago is quite well-kitted with features like adjustable headrests and power folding, outside rear-view mirrors.

Safety features on all three are on the same level, for the most part. ABS, seat-belt reminders and pretensioners, and a rear defogger and wiper are common, though the Tiago and Santro also get rear parking sensors. However, the Santro only gets a driver’s side airbag (the top-spec trim gets dual front airbags) whereas the other two get dual front airbags.

Hyundai has priced the new Santro competitively. While the base variant undercuts the Maruti by more than Rs 30,000, the Tiago starts lower still. In addition, the base Santro D-Lite is sparsely equipped. However, the AMT and CNG versions carry quite a premium and are slightly more expensive than both its competitiors. The highest AMT-equipped variant, the Santro Sportz AMT, misses out on kit such as rear parking sensors, a reverse camera, dual front airbags and a rear wiper/washer. In comparison, Tata and Maruti offer their respective AMT-equipped hatchbacks with a top-spec, fully-loaded variant.

A proper comparison will be required before coming to a definitive conclusion, but on paper, the new Hyundai Santro looks to be a very serious contender in this segment.

Do you think the new Santro will be able to match the older model's success? Let us know in the comments below.