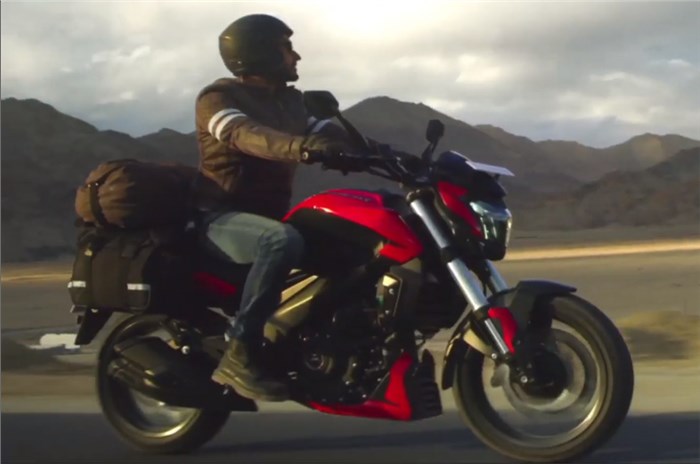 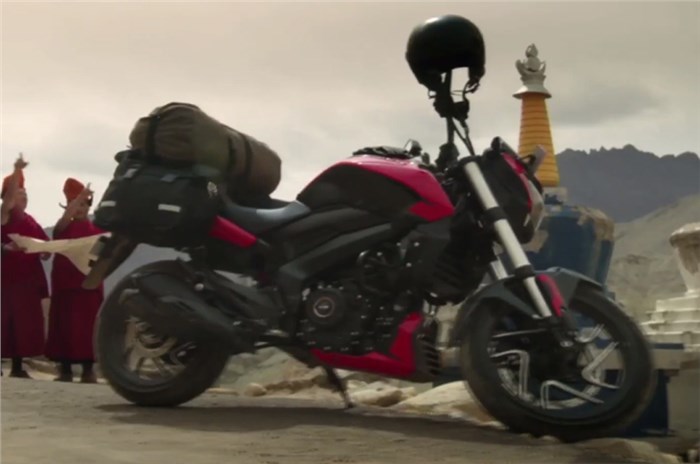 Bajaj Auto has released a new advertisement that completely reveals the for-2019 Dominar 400 ABS. The video released starts off with riding shots of the upcoming 400cc, ABS-equipped bike, which in turn confirms many rumours about Bajaj’s updated flagship offering.

First, there’s no missing the USD fork that the new Dominar is equipped with. The unit appears to be similar to the one seen on KTMs, with similar dimensions. What further leads us to believe that this is a similar unit, is that the braking set-up is now on the other side, just like KTM’s. That said, we believe the damping on the Dominar will be set up differently; more in tune to the cruiser nature of the motorcycle.

Other major updates visible in the video are the reworked exhaust system and a redesigned tank panel. The cowls on the tank are smaller than the outgoing model’s, and the tank, as a whole, loses some of its body-coloured bits for blacked-out ones. Bajaj has also appeared to have ditched the golden-coloured wheels and gone back to black-finished rims with polished outer edges.

While not much else can be seen in the advertisement, it confirms the authenticity of previous rumours that talked about the updated instrumentation and reworked exhaust system. The motorcycle is expected to get a digital secondary unit that displays gear position, the odometer and time. The earlier functions of the tank display have been taken up by the handlebar-mounted primary display, which now conveys information in text. As for the exhaust, it is now a twin-exit unit that will produce a much throatier sound.

The outgoing Bajaj Dominar is powered by a 373cc, single-cylinder engine, which puts out 34.5hp and 35Nm of torque. We expect the upcoming bike to receive a mild increase in output figures. Bajaj might also switch to a DOHC engine as seen on the KTM 390 Duke. This switch, along with the reworked exhaust, may enable the Dominar 400 to comply with upcoming emission norms.