A walkaround video of the new Dominar reveals a new instrument cluster and a new exhaust note. 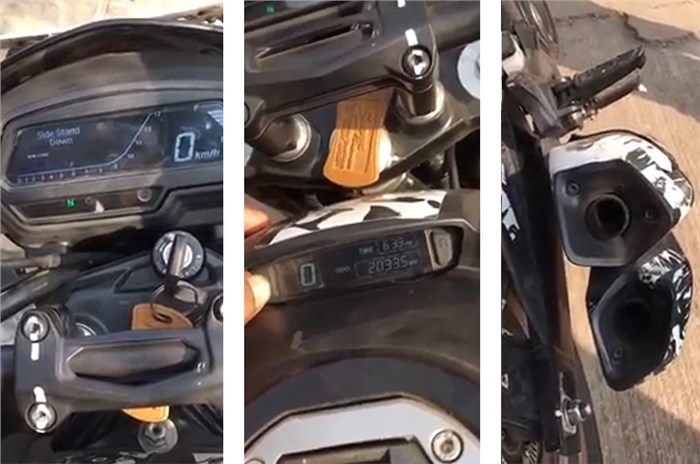 Back in September 2018, we broke news on Bajaj having an update for its flagship motorcycle in the pipeline. Now, a new video of the bike has been uploaded on YouTube, revealing a few updates expected on the next-gen Dominar 400.

While the test mule in the video is camouflaged, there’s no missing the new USD fork. The front suspension unit looks similar to the one seen on the KTMs, but we believe the damping on the Dominar will be set up differently, more in tune to the cruiser nature of the motorcycle. Meanwhile, the monoshock appears to be the Nitrox unit seen on the current Dominar.

Other major updates visible in the video are the redesigned instrument cluster and the reworked exhaust system. The Dominar currently on sale displays relatively minimal information on the secondary tank mounted display, with ABS, side-stand and battery status indicators taking up most space. The video shows that the upcoming iteration of the bike gets a digital secondary unit that displays gear position, the odo and time. The earlier functions of the tank display have been taken up by the handlebar-mounted primary display that now conveys information in text, with messages like 'Side Stand Down' and 'Engine Kill On'.

The new Dominar is fitted with a twin-exit muffler. The exhaust note is a lot more throaty with a thumping idling note.

The current-gen Bajaj Dominar is powered by a 373cc, single-cylinder engine which puts out 34.5hp and 35Nm of torque. We expect the upcoming bike to receive a mild bump in output figures. The brand might also switch to a DOHC engine as seen on the KTM 390 Duke. This switch may see the bike comply with BS-VI norms, or at least get it closer to clearing the upcoming emission norms.

Bajaj recently stopped production of the non-ABS Dominar. The upcoming Dominar is likely to come equipped with a dual-channel unit, as seen on the current bike. Bajaj hasn't released any official information yet but you can expect the bike to cost slightly more than the current Rs 1.63 lakh (ex-showroom, Delhi).