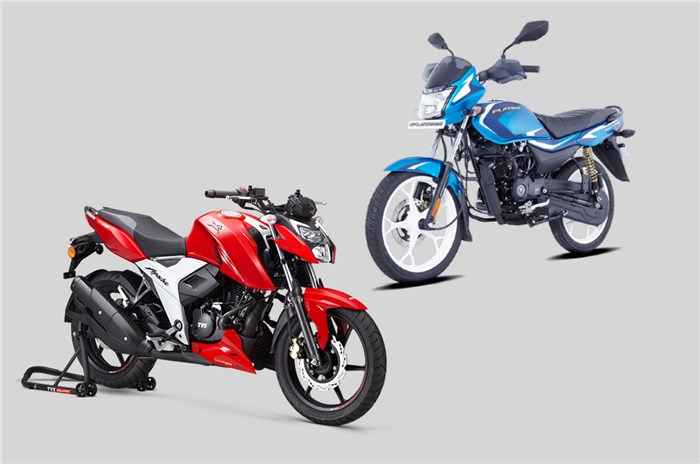 Bajaj Auto (49 percent) and TVS (25 percent) together accounted for 74 percent of total two-wheeler exports in April-September 2021.

The two-wheeler industry is yet to see a rise in the demand in the domestic market. However, the sector is firing on all cylinders when it comes to exports. In the first half of FY2022, total shipments from India were 22,45,221 units, a 101 percent rise year on year.

In terms of sub-segments, a total of 1,85,461 scooters were exported since April this year, which constitutes a 179 percent YoY growth. On the motorcycle front, export demand chalked up sales to 20,52,898 units, up 96 percent YoY and 6,862 mopeds were sent overseas, up 176 percent YoY. Leading the export charge are the Pune-based Bajaj Auto and Chennai-based TVS Motor Co.

Bajaj Auto, the country’s No. 1 two-wheeler exporter, has shipped a little over a million units – 10,98,520 – and notched 74 percent YoY growth. While this strong growth comes on a lower base of a pandemic-impacted export numbers in 2020, the fact of the matter is that Bajaj Auto is well half-way through the fiscal and is set for record exports by end-March 2022.

Meanwhile, TVS dispatched 5,60,118 units to overseas markets in the first six months of the ongoing fiscal, clocking 120 percent YoY growth (H1 FY2021: 2,54,143). One can expect the 110cc Radeon, Jive and Sport motorcycles trio to be the largest contributor – like last year – along with the Star City and Victor, Apache series, the Jupiter, NTorq, Wego and Zest scooters. TVS has a presence in over 60 countries across Africa, South East Asia, the Indian subcontinent, Central and Latin America and is seeking to enter more markets in Europe and North America as well. 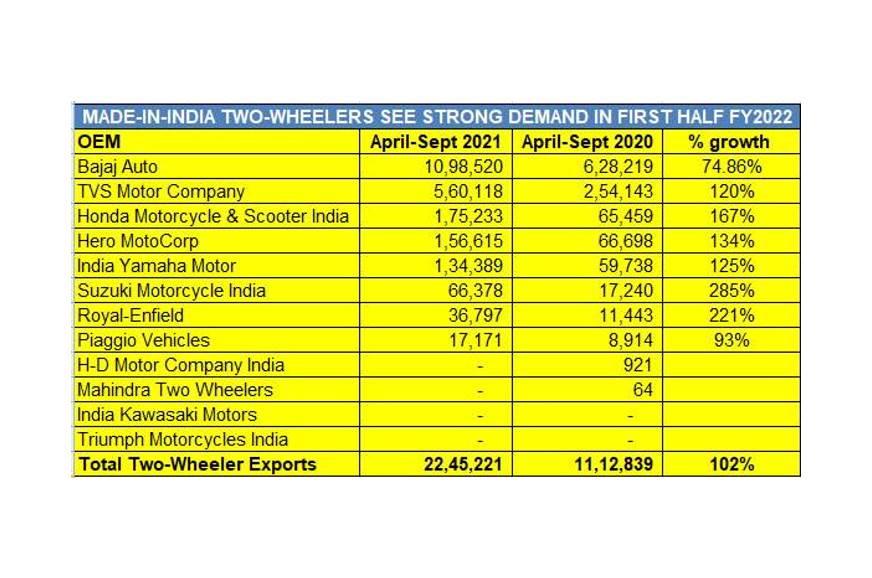 All this is good news for India Two-Wheeler Inc. Judicious management of both domestic and export market sales help inventory management as well as capacity utilisation. Yamaha, Suzuki, Royal Enfield and Piaggio have all recorded smart export growth and with markets opening up in earnest, things can only become better for the Indian two-wheeler industry.

Riding into the second half of this fiscal, we can expect Bajaj Auto and TVS Motor Co, along with the other OEMs, to further up the ante on the export front. Not only are the profit margins better on the made-in-India products, but overseas sales also act as a buffer to iffy demand in the domestic market.

Bajaj Pulsar 250 to be launched on October 28