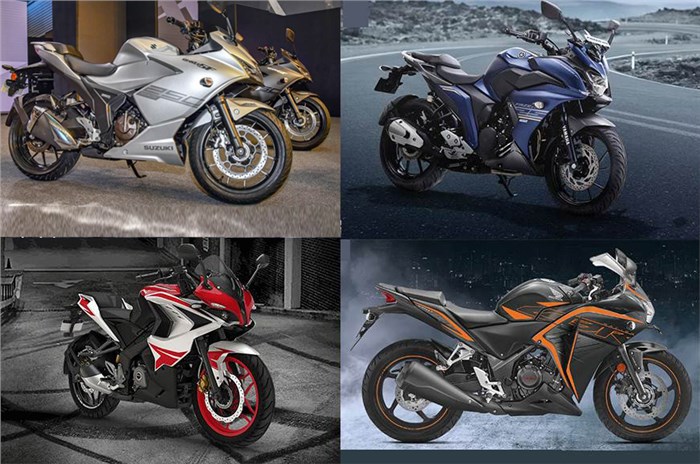 We take a look at how the Gixxer SF 250’s specs stack up against some other entry-level faired motorcycles in the price range.

The last time Suzuki sold a 250cc motorcycle in India, things didn’t go as well as planned for the Japanese bike manufacturer. The Inazuma 250 was discontinued in 2014, just a little over a year after its launch; and Suzuki has left the gap between its entry-level motorcycles and big bikes unfilled, since. However, this has changed with the launch of the Suzuki Gixxer SF 250. The specifications of the Suzuki enable it to comfortably fit right into the intended segment.

The Gixxer SF 250 is powered by a 249cc, single-cylinder engine that makes 26.5hp and 22.6Nm of torque – numbers that are almost identical to those produced by the CBR, which happens to be the most outdated motorcycle on this list. The difference in the power figures numbers may be minimal (almost negligible, really) but the CBR weighs 6kg more. The Suzuki’s numbers are considerably more than that of the Yamaha, which is the least powerful bike here. The gearbox is another aspect where the Yamaha doesn’t have as much on offer as its rivals here; the bike is equipped with a 5-speed unit in comparison to the 6-speed transmission on the other bikes. Meanwhile, the Pulsar manages to hold its own with 24.5hp and 18.6Nm of torque, with the latter figure a result of the motorcycle's disadvantage in displacement.

The Gixxer SF 250 features aggressive styling. Design elements like the sharp grooves on the tank and the grooved indents on the upper half, are cues also seen on the smaller Gixxer 150. Another design aspect that contributes to the bike's aggressive look is its headlight. On the other hand, the Fazer 25’s alien-like front end may not be to everyone's liking, but it is a head-turner, nonetheless. The drama isn’t as prominent towards the rear, resulting in a decently proportionate design. Speaking of which, the least dramatic design of the lot has to be of the Honda, which is now over eight years old and – barring a few graphic schemes – hasn’t received a substantial cosmetic update. The last bike of the lot, the RS200, sports a half-fairing and styling that is as unconventional as the one on the Fazer, with bug-eyed headlights and a stubby exhaust. That said, it isn't an unattractive motorcycle either, and its sharp lines still allow for its four-year-old design to seem fresh.

All four motorcycles come with a disc brake at either end, but the Pulsar RS200 features only single-channel ABS while the others offer a dual-channel system. Another thing the four motorcycles have in common is the use of a telescopic fork and a monoshock. While the motorcycles don’t weigh too far apart from each other, at this performance level, every kilo makes a difference, and it's evident from the power-to-weight ratios in the subsequent table to see how this pans out. The Yamaha Fazer, despite its almost excessive bodywork, is the lightest motorcycle of the lot at 157kg, while the CBR weighs a whole 10kg more at 167kg.

When it comes down to the numbers, the Gixxer SF 250 makes a whole lot more power than its direct rival, the Rs 1.44 lakh Yamaha Fazer 25. The Honda CBR250R produces similar performance figures as the Suzuki but is now severely outdated and is priced too high at Rs 1.95 lakh. The RS200, on the other hand, at Rs 1.39 lakh, produces as much power but considerably lesser torque; and is also fitted with single-channel ABS. The Suzuki Gixxer SF 250, at its price, does seem like a promising proposition.