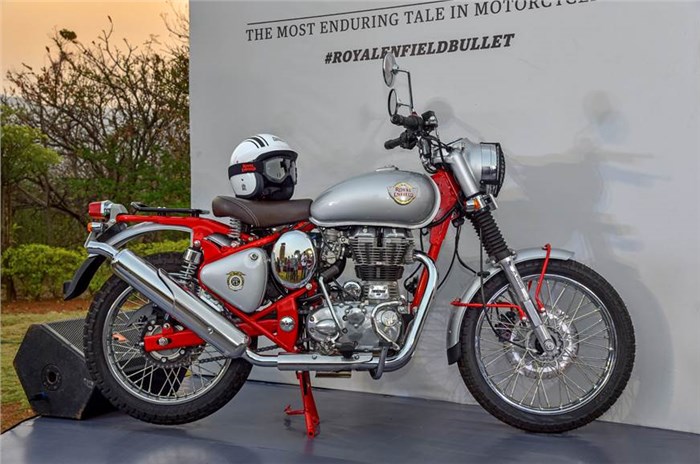 Launched in March 2019, the Trials didn't really set the sales chart on fire as the company had hoped.

Royal Enfield has discontinued the Bullet Trials 350 and Bullet Trials 500, in India. The Bullet Trials 350 and Bullet Trials 500 were launched in March 2019 and didn't really sell in large numbers as the company and its dealers hoped. The interesting thing here is that, though we were aware that the 500cc Bullet line-up would be taken off the shelves after the BS6 emission norms kicked in from April this year, the fact that Royal Enfield hasn't bothered upgrading the 350cc Trials model, while the Classic 350 has been upgraded, shows that there was no point in doing so, owing to the dismal sales.

The Bullet Trials were introduced as motorcycles that paid homage to the Royal Enfield Trials bikes of yesteryear. While the bikes shared bits like the tank, side panels, suspension and even the engines with their standard Bullet cousins, the Trials looked extremely desirable with their larger wheels, upswept exhaust and chopped fenders. Think of it as a custom job made officially by a company. The Trials were also shod with dual-purpose tyres and looked ready to tackle whatever trail you could throw at it. In essence, the Trials stood out among the sea of Royal Enfields that dot our roads, and the sense of individuality it offered meant that it'd only appeal to a particular niche. Also, at Rs 1.62 lakh for the 350 and Rs 2.07 lakh for the 500, the Trials weren't exactly cheap, and the lack of a pillion seat meant that the majority of customers who were seeking a practical motorcycle looked the other way.

While this is the end of the road for the Royal Enfield Bullet Trials 350 and Bullet Trials 500, it'll be interesting to see if the company considers rolling out a custom-style motorcycle in the future.